The keyboard didn’t work properly, and I’m now sure some of the reason is all the gross stuff that had been spilled in it over the years. 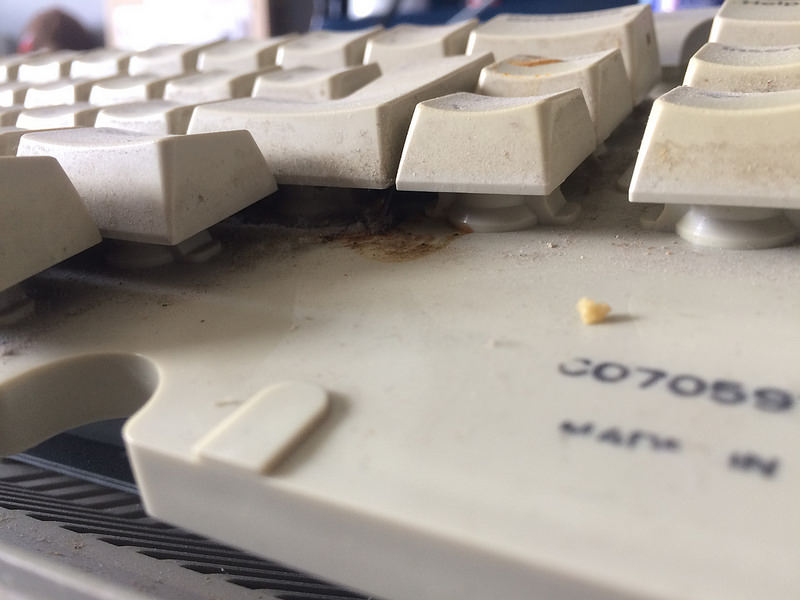 Taking apart the ST is pretty straightforward. As with other breadbox-style computers of the era, it just comes apart with a whole pile of screws and layer after layer of RF shielding. The screws are all the same length, except for three longer brass-coloured - not cad-plated, I don’t think - screws that appear to hold up the floppy drive.

Once I got the case open, I did a brief look-over of the board to search for obvious physical damage, and popped the keyboard connector loose.

The biggest thing I noticed was that the front fascia of the floppy drive had gotten cracked. A loose bit of plastic was floating around, from the damage. 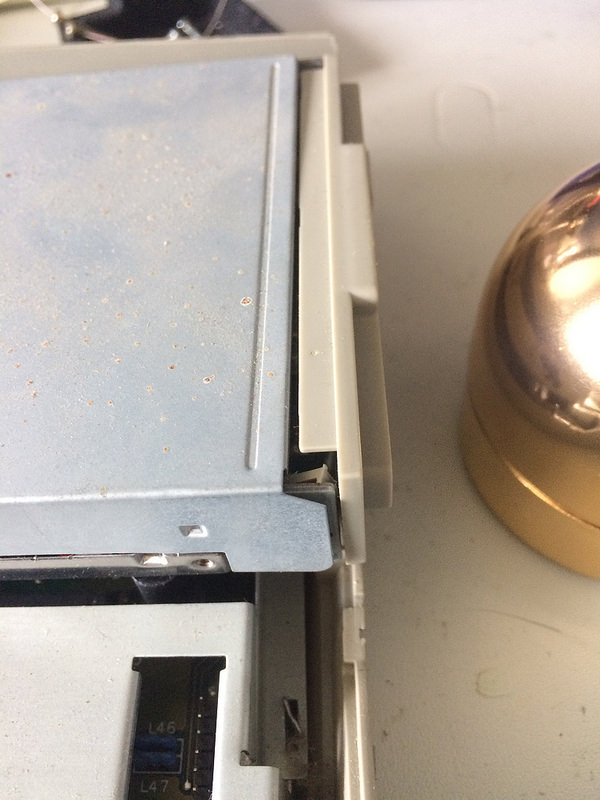 Since the chunk was trapped in the lower corner of the drive, it didn’t appear to be interfering with anything mechanical, but it’s a bit of a bummer to have this irreplaceable chunk of the machine broken. I don’t think I can easily epoxy it on, especially since it’s part of the mounting tab for the fascia, which is under a lot of strain. I pulled out the piece with tweezers and put it aside, then took a look inside the floppy drive.

A little bit of dried grease is the only obvious problem I could see. I’ll have to come back to this, and give the drive a really good disassembly and cleaning in a future entry.

The backside of the keyboard PCB, while filthy, did not look to have any obvious damage on it. Since I didn’t have time to take the whole board apart today, I plugged it back in and booted the machine up.

Some keys now appear to work (typing on the desktop produces an error “ping” sound for most keystrokes), but not all, and the keyboard LED flashes when floppies are being loaded. This makes me pretty sure the 74-series driver chip I’ve seen blamed for other keyboard failures is alright, and the problem lays somewhere inside the keyboard, probably related to the gunk that’s been spilled into it, or broken traces.

I ran out of time, and so started putting the machine together. It was at this point that I realized the black plastic standoffs which support the back of the floppy drive had broken off, probably from the torque of undoing the long brass screws.

I’ll have to either glue these back onto the case, or find a substitute plastic standoff from a hardware store.

When I return to this machine, it will be to fully dismantle the keyboard PCB, check for broken traces, and clean the disgusting crap out of it. I’ll also figure out a way to make sure the floppy drive stays happy and supported in the future.