Intro to the PC98

NEC, a giant Japanese conglomerate that invented half the free world, needed to make personal computers for the Japanese masses. North American computers weren’t sufficient, not least for the fact that with their relatively low resolution and tiny amounts of memory, they didn’t deal well with kanji. As a result, NEC ended up making a series of personal computers, including the 8801mkII and the 9821AP2 that I now own. You can, of course, see the full details of the platform and its history on Wikipedia, but for those of you readers who want to get right to the guts of the machine, continue on.

The PC9821 is effectively a parallel-universe IBM/Wintel PC architecture. It has a few commonalities - a nice, corn-fed Intel 486DX - and then gets on the train at Crazy Station. Here’s some highlights:

Setting up the PC98 is not exactly the most straightforward situation. Up until now, all of the machines I’ve owned have been from North America, and happily ingested our 120VAC wall power without complaint. This machine hails from Japan, where 100VAC is the standard (albeit at either 50 or 60Hz depending on what city you’re in). The power supply, only expecting to be used in Japan by Japanese people, is rated only at 100V input voltage. This necessitated a step-down transformer, which was a project on its own to get hooked up - I had to source a Japanese power cord, with screw-down ground terminal, to make everything work safely.

Like the 15kHz Amigas and Atari ST and the Apple IIgs, the PC98 does not run at a traditional 31kHz horizontal refresh rate, instead preferring a relatively leisurely 24kHz. This meant that my trusty NEC 1970NX was called into action. This model of PC98 also doesn’t have VGA out, preferring the Japanese 15-pin RGB standard established by prior machines such as the luscious X68000. A $10 adapter was purchased and thrown in the box before the computer left Japan for just this reason.

The keyboard and mouse are also proprietary - thankfully, unlike the 8801mkII, the keyboard is serial, has a reasonable number of pins, and is relatively easy cheap to get. I ended up with three keyboards by way of an imprecise bidding technique, and then almost forgot to get a mouse.

So now that we’ve put something special into literally every port on the machine, let’s fire it up!

Our first encounter is with a colourful screen, telling us to reset the SOFTWARE DIP-SWITCH. This is because the clock battery died, and the BIOS settings were wiped (in a nod to NEC’s prior machines, the BIOS screen literally draws DIP switches that you can toggle with the keyboard to control various settings). It went away on subsequent reboots, so the battery is obviously capable of being recharged, but will probably need to be replaced anyway.

After that, we proceed to the traditional RAM check. It says I have 640 + 133xx KB, so this machine has at least 12MB in it. A later check in the BIOS would reveal that I actually have a 16MB upgrade installed. Not sure yet if there is some reserved space for graphics or whatever.

Now, we proceed to this haunting yet artfully-arranged error screen. “Please insert system disk,” it says - at least according to Google Translate.

I tried to write a few images on the Catweasel, using different techniques, but either the Catweasel software doesn’t support it properly, or the floppy drive is capable of being tricked into writing Amiga floppies but not PC98 ones. It’s hard to figure out what is going on, because I don’t know a hell of a lot about how floppy disks (or images) are structured - yet.

For now, there’s an easy route that just involves throwing money at the problem - my least favourite kind of solution. The community seems to indicate I should pick up a “3-mode USB floppy drive,” so that is probably what I’ll end up doing.

Well, without an operating system, what else can we do?

…remember that part about BASIC in the ROM?

The machine is designed really well, with almost everything accessible without having to take out some tools or remove the top case. You can add hard drives, C-Bus cards and what appears to be other stuff without popping the top. Since it appears I don’t have a hard drive, I popped the top anyway to see if I could figure out how to put one in. 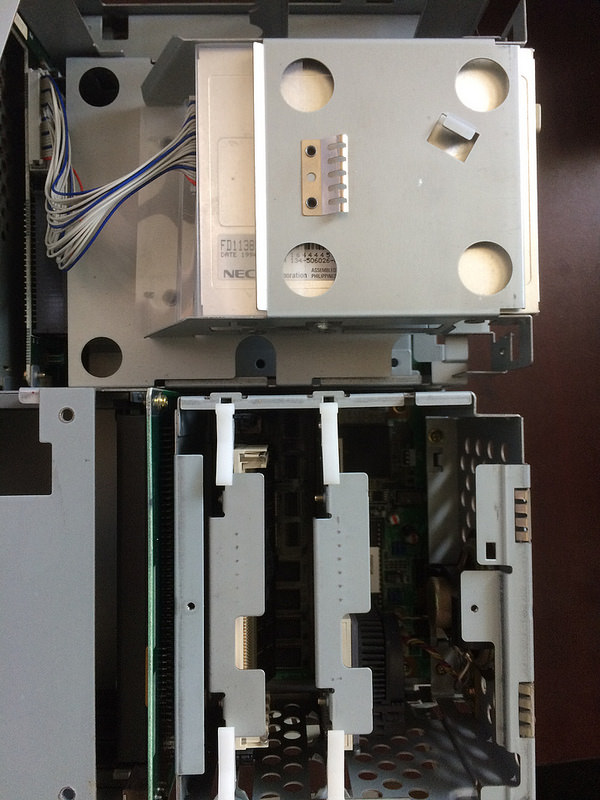 Big bummer here when looking into the front of the case where the hard drive installs - it is supposed to have a quick-disconnect caddy, but it looks like mine was removed when the hard drive was, probably by a computer recycler back in Japan. That’s going to be really hard to find.

After ignoring whatever the warning sticker says on the top of the CPU cage, I peered inside. The speaker is unplugged - could this be why the seller said “pipo sound is not heard” in the original ad? Let’s pop the CPU card out for some more room to plug it back in. 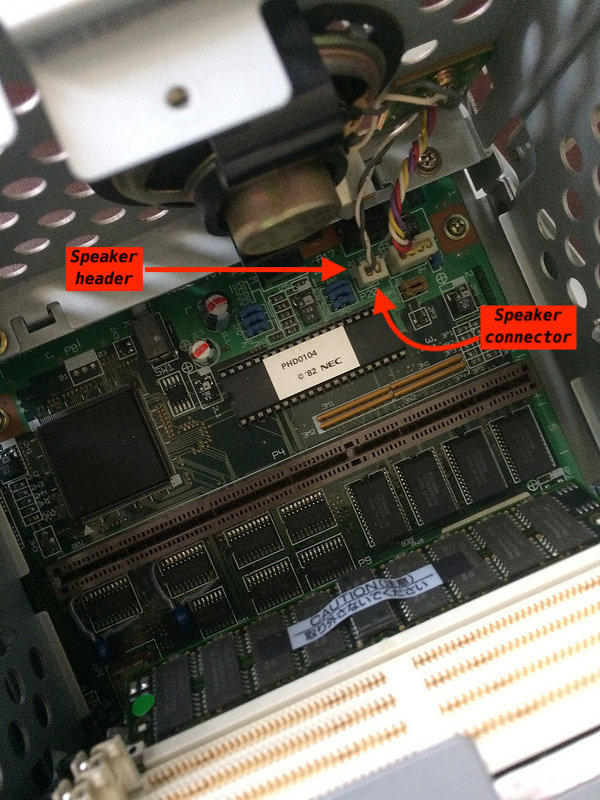 The CPU card pops itself out by way of these handy plastic wings applying even leverage to the connector. Pretty clever! 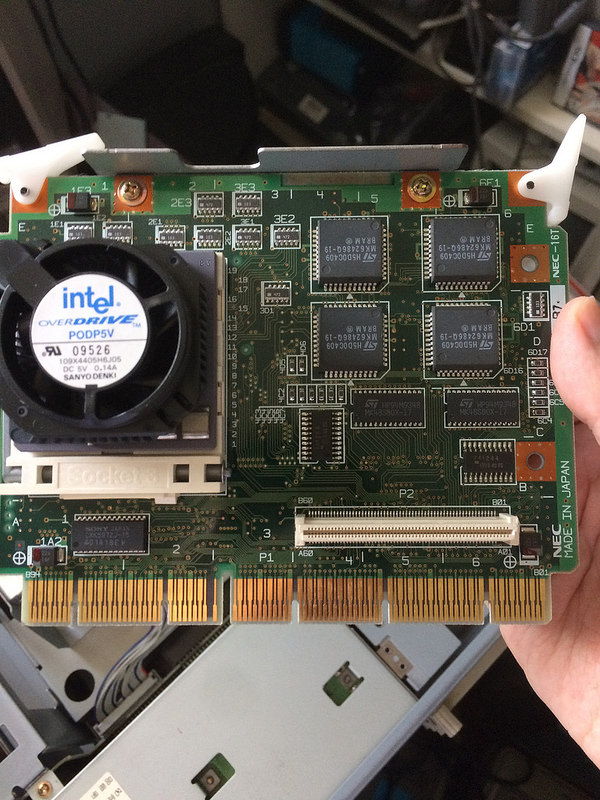 And here’s the CPU board itself. I remember that “OverDrive” used to be the name for drop-in upgrade Intel processors. Has this machine been upgraded past its stock 486DX/66? That would explain the gobs of RAM it also has…

Unfortunately, after buttoning the machine back up and turning it on, the PC speaker still did not emit the boot beep. Pipo (and actually being able to use this furious beast of a computer) will have to wait for another day!