Reportedly, the ROM also contains some of the last pieces of actual production code that 90s supervillain Bill Gates wrote at Microsoft before he dedicated himself fully to management. The ROM features a standard-ish Microsoft BASIC, a little notepad program and a serial terminal application. You could socket in expansion ROMs to add more features or even high-performance upgrades.

You could write BASIC on the bus. What could be cooler? Of course I wanted one, but used ones always seemed to slip through my fingers in the intervening decades.

Now, the TRS-80 Model 100 isn’t really related to the TRS-80. Or the CoCo. Branding is fun! It’s actually an Intel-based Japanese computer.

What I didn’t learn until much later is that the Model 100 is just one of many related machines. Kyocera from Japan actually built this machine for Tandy, and they also built a bunch of other, very similar, models for other vendors. Tandy, Olivetti, NEC, and Kyocera themselves all sold their own versions of the machine.

When NEC made their variant of the Kyocera siblings for the Japanese market, they released it as the NEC PC-8201. I know, I don’t understand NEC product numbers either. The 8201 was a big success in Japan, and a few different variants emerged, including a cool red one:

Unfortunately, I didn’t have much luck tracking down either the 8201, or its less-colourful American variant, the 8201A. I figured one would show up eventually, and it did - in the form of a PC-8300 at the Vintage Computer Festival (PNW) a few weekends back.

An awesome member of a retrocomputing chat I’m in spotted a pair of PC-8300s in a corner of the consignment area, and snagged one for me at my request. Soon I had the machine on my door, and I was ready to start investigating. 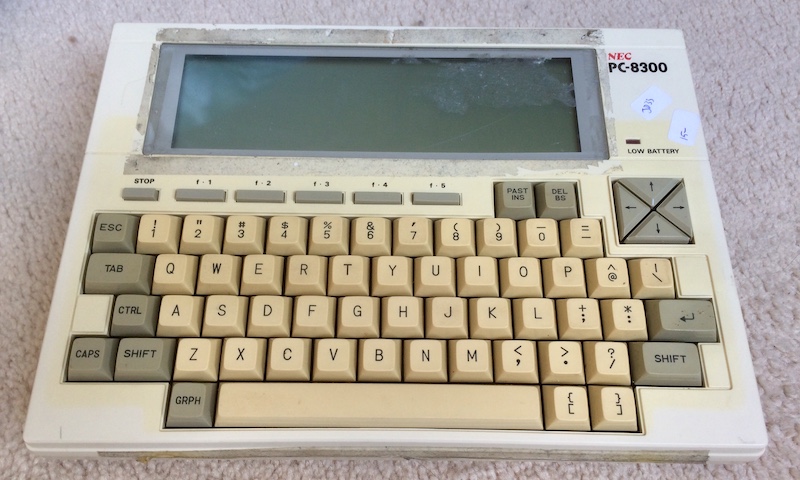 The 8300, as the numbers imply, is a slightly upgraded version of the 8201. System RAM was bumped to a massive 64K from 16K, it had an optional internal modem, and the ROM software got some patches (including X-Modem support!)

There are some interesting ports on this machine. Unfortunately, whoever used this NEC a long time ago left all this sticky tape residue on it, which also picked up gross hair and grime. Not my first nasty computer; it will clean up really nicely with isopropyl alcohol and elbow grease (which is not actually made out of elbows as I had previously assumed.)

Cool ports - AC adapter, a switch to turn write-protection off in the second bank of storage (still not sure what that means, it’s just what the manual said), a reset switch, a port for an external floppy drive, a “phone” port (do I have a modem?), a bar-code reader port, a Japanese-style printer port, an American-style DB25 RS232 serial port, and a “CMT” cassette data port for storing data on tape. So many options! 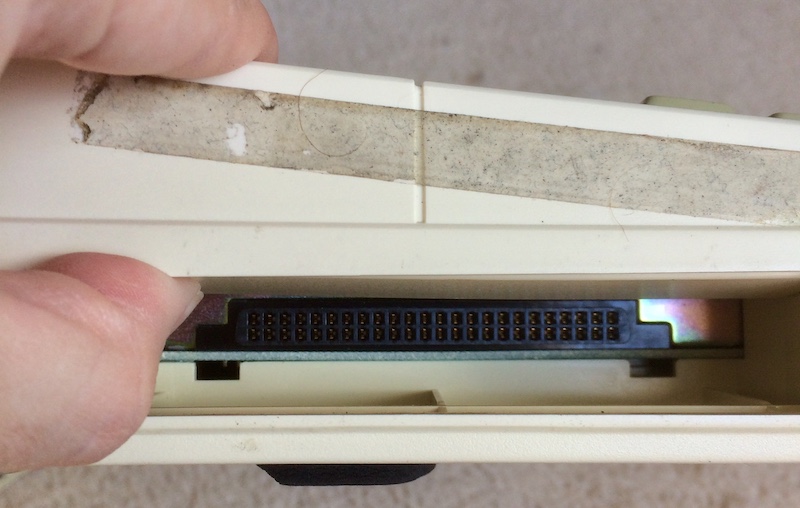 If that’s not enough expansion options for you, there’s also a processor-direct slot with a little spring-loaded dust cover on the side. You can use this with the NEC PC-8241A “CRT adapter” to get external colour video. I know! 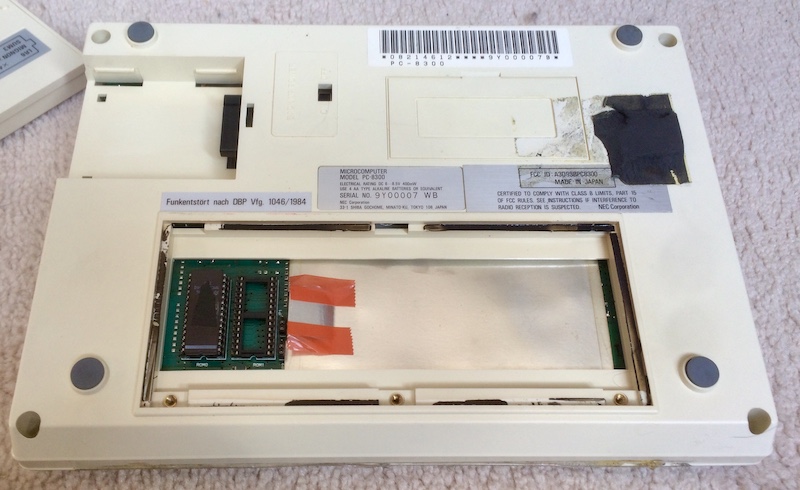 On the underside of the machine, you can see the big outstanding problem with it. The huge plastic door that is supposed to cover the ROM sockets is missing in action. Also missing is the battery holder, because I removed it to put in some batteries (more on this later).

ROM0 is, I assume, the main system ROM. It’s aftermarket, which we’ll get to later. I’m not sure what kind of ROM chip this is, but I look forward to replacing it with one with a few more goodies installed. 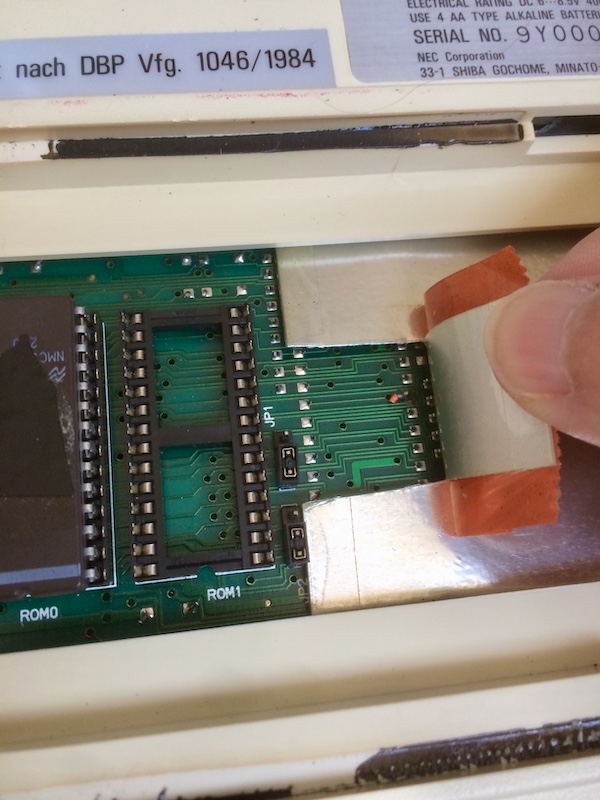 What’s more interesting is this hand-cut hole in the RF shielding. It seems to go to some unpopulated pads on the back of the board, which I don’t yet fully understand the purpose of.

Considering the black goop (RTV?) around the edges of this door, I’m thinking there used to be some kind of industrial equipment that was glued into here, had a second ROM to drive it, and was attached to the motherboard somehow at one of these pads. When the machine was decommissioned, all this proprietary stuff was probably removed. 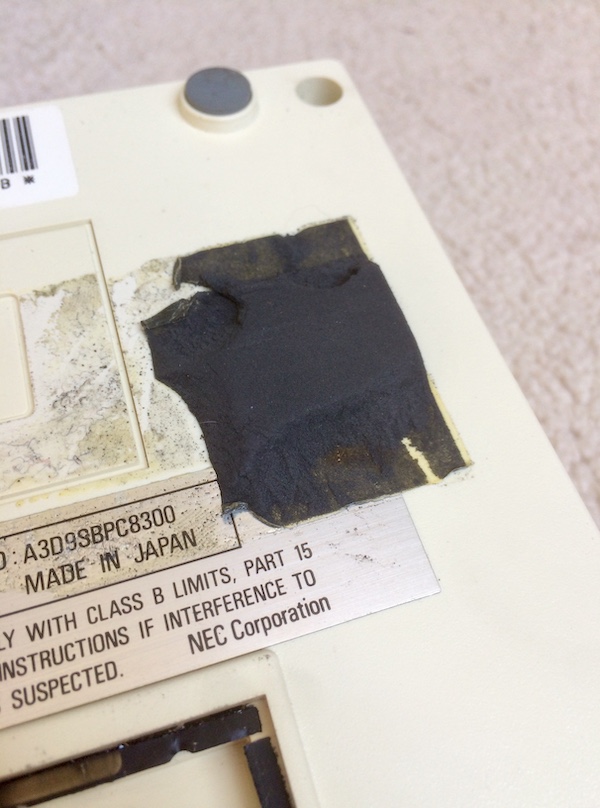 Also on the back is this strange lump that seems to be made up of electrical tape. Not sure what’s going on here, but my best guess is that it’s a physical support for whatever equipment used to be part of this little computer. 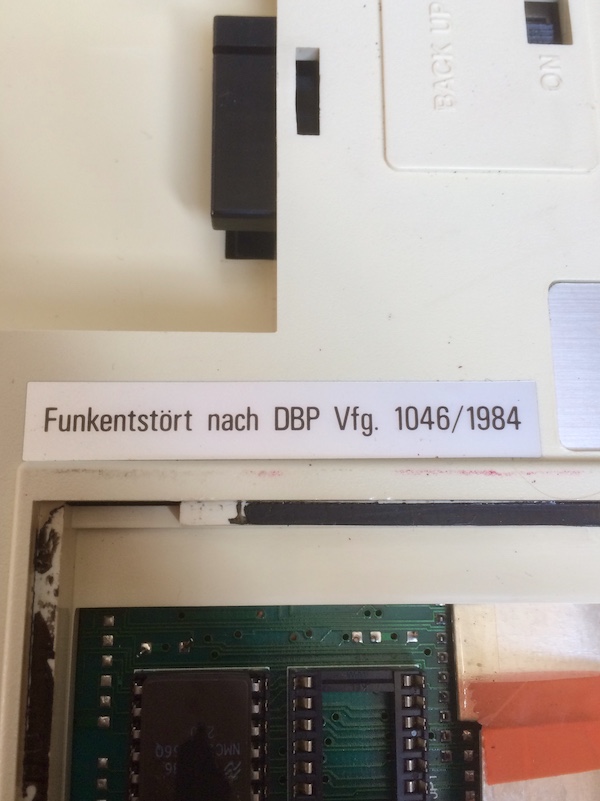 This sticker from the German post office, declaring the machine as being RF-certified for operation in Germany, seems to indicate that this computer spent some time in Deutschland. How it got back to America is a question for the ages.

Update: From looking at other pictures and videos of PC-8300s, it seems they all have the German post office sticker on them (the post office is their equivalent of our CRTC/FCC), as well as the cardboard “RF shielding” around the ROM0/ROM1 sockets.

And yes, before someone asks, as a Japanese computer, it does use JIS screws to hold itself together. That Vessel set is going to make itself useful once again.

Now for the fun part - turning it on.

Since I had been told the machine worked prior to shipping, I went to fetch some batteries for the little guy. It takes four AA batteries in this little removable battery cartridge. 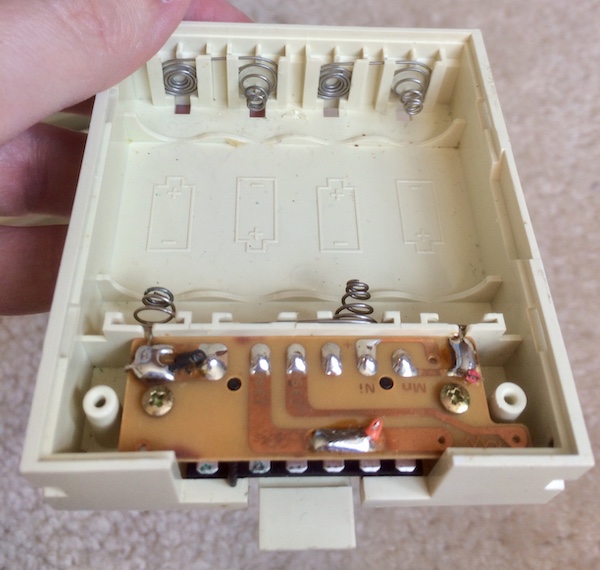 Once I put in some batteries and fired it up, I was treated to a screen full of garbage. Pushing RESET made the garbage go away and drop me into this screen, which I assume was made by someone testing out the keyboard. However, no keys seemed to do anything. The insertion cursor blinked, but otherwise it was frozen. 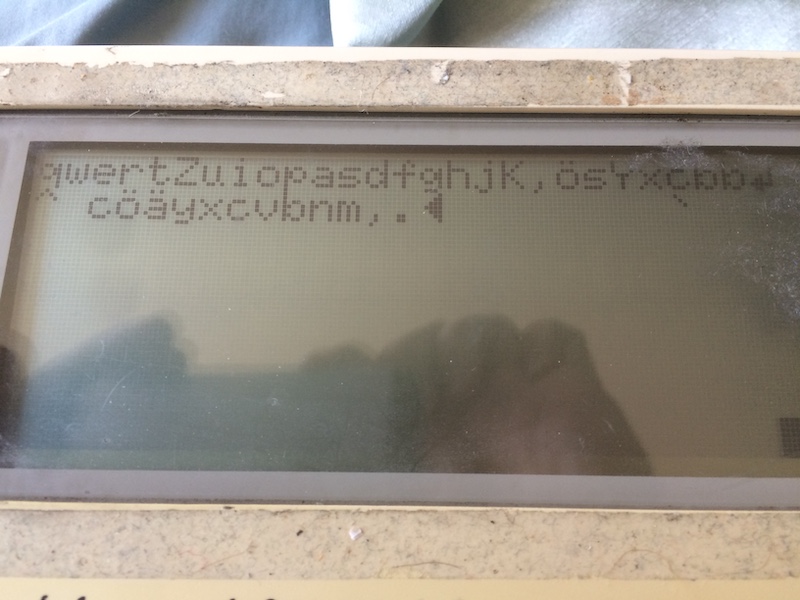 qwertZ - that’s interesting. This thing does indeed have a German keymap, as I had been warned.

I turned the “battery backup” switch on the back off for a few minutes and then on. My guess was that there was some kind of stuck state in the machine.

Success! The machine reset, and I was able to go into TEXT and write my own little notes to test the keyboard. 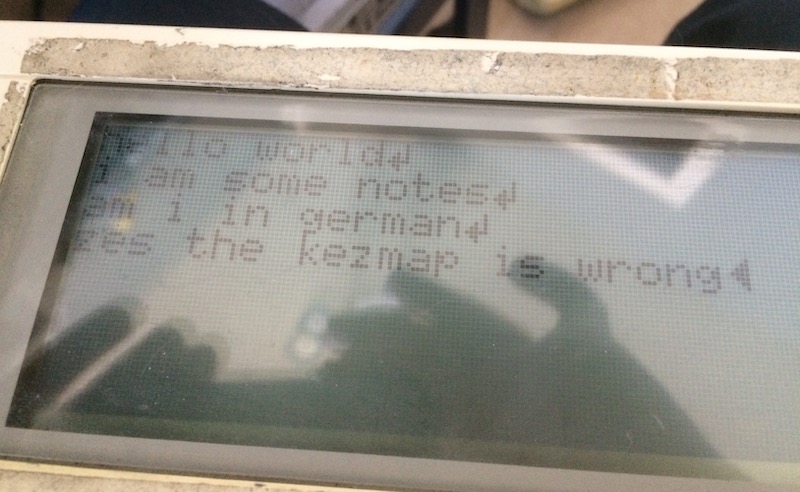 It was definitely not a US keymap - not only was the Y key emitting Z, but all the punctuation keys emitted strange umlautted letters.

I cleaned the screen of some sticker residue, and then stepped back to admire my handiwork. Aside from a gouge in the screen, it was in pretty good shape. 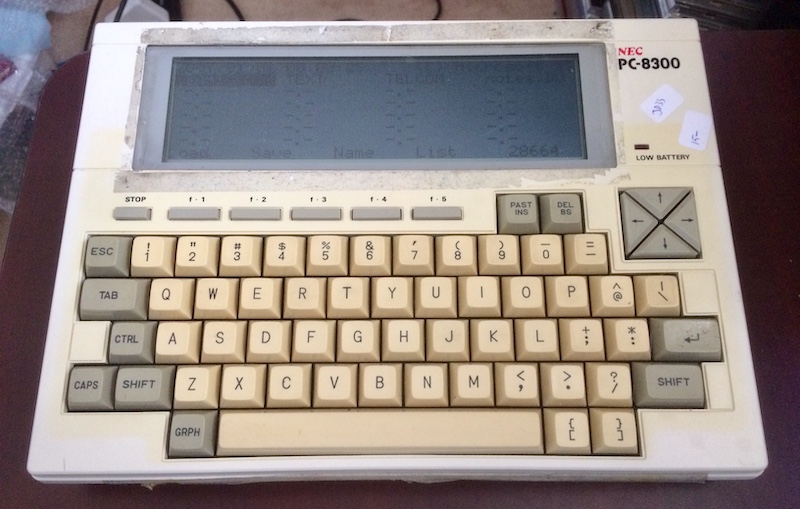 You can’t quite see it in this picture, but the ROM has been “Y2K-patched;” another indication that this is a custom ROM. In the corner of the ‘home screen,’ the computer is supposed to display the current date. Unfortunately, it assumes that it’s always the year 19XX. Someone else in the past has gone in and hex edited the string “19” on the current date to “20.”

This is a pretty neat little machine. In order, my goals are going to be: