The NEC Bungo mini5 PWP-5SX Japanese word processor that I’ve been working on this month came with an instructional VHS tape explaining how to use its near-infinite multitude of features. Here’s how I captured that tape.

This… is a VCR. I never thought I’d be showing off a VCR on this blog, but here we are.

This is a Sylvania 6241CVB, which seems to be a very late model, inexpensive mass-market VCR. It was very very dusty, and it also had melted textured plastic from whatever sat on top of it (rubber feet?) for decades of disuse. I found it on the side of the road while I was out for a walk, and, knowing this project was coming up, took it with me. To make the deal sweeter, it even came with a 2m length of nice shielded co-axial cable, which would have been worth the awkward walk home on its own! 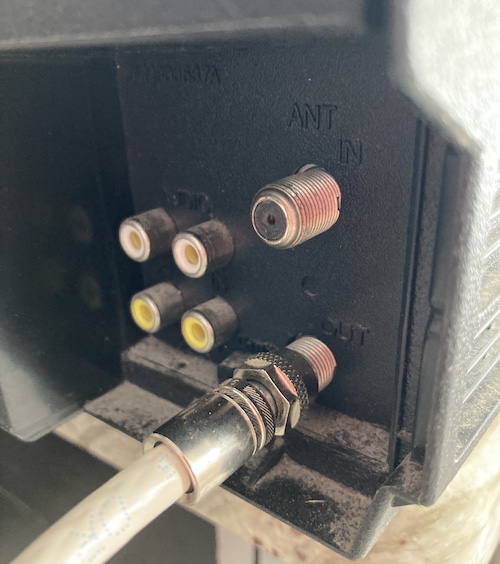 As you can see, and as I’ve already said, it’s very dusty. Such is the fate of many a VCR, crammed into an entertainment centre and disused for decades until they ended up on the lawn for a friendly neighbourhood weirdo to take home.

Here are the ports: one RF in, one RF out, composite video in and out, and mono audio in and out. Nothing special. There is another pair of RCA jacks on the front, presumably for input from a camcorder. Once I’m out of tapes to dump, this thing might find some work as a very big RF-to-AV converter, or at least it would if most of my RF-generating equipment wasn’t Japanese or European. 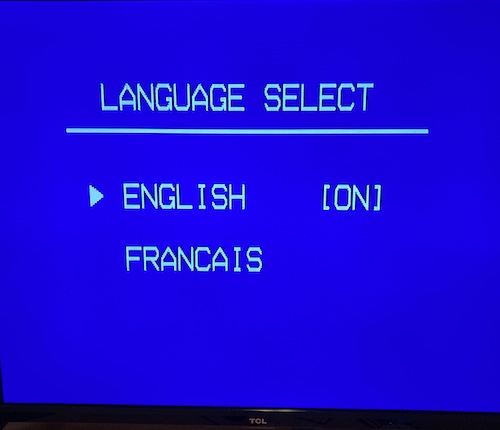 I plugged it in to composite input on my TV and fired it up, and was greeted with the classic language-selection screen. Surprisingly, I am still capable of understanding enough cereal-box French to be able to navigate the menus en Français.

I introduced the VCR to a Lysol wipe, and it was reasonably clean afterwards, or at least clean enough that it didn’t merit a second wipe (they are expensive.) Let’s get ready to transfer this tape to digital immortality.

Setting Up a Recording

I usually use QuickTime Player to record the input from my cheapo “UVC” AV-to-USB adapter. However, this tape is 120 minutes long, according to the back cover. I don’t have enough space on my Mac’s SSD to store that much video, and QuickTime didn’t let you change the location of the temporary recording to an external drive.

So: I used OBS Studio v28 instead. It turns out that, in addition to facilitating Twitch hot-tub streaming, it does a pretty good job of recording Japanese instructional cassettes too. And – unlike QuickTime – you can tell it to put the temporary files anywhere you want.

Once the video was finished being recorded, I noticed a nasty ground-loop buzz. I edited the video in the free version of DaVinci Resolve to get rid of the lead-in and lead-out from the recording process, and while I was in there, I tried its “smart” noise remover. Either I didn’t use it properly, or it didn’t detect my noise properly, or both. I ended up having to turn dials until the noise softened up, and then exported the video. The resulting sound is still buzzy on quiet parts, but it doesn’t overwhelm the spoken word.

Uploading to YouTube was decidedly un-fun. After two hours of waiting for the video to trickle out of my slow monopolist connection, YouTube decided only then that they wouldn’t process it, because the video was too long. However, if I verified my account, I could upload videos longer than 15 minutes. I verified it, but then couldn’t find any way to start the processing of the video again. Defeated, I embarked upon another two-hour upload.

New computers are so much work! Give me something full of mouse pee from 1982 any day of the week.

And here is the film, on YouTube. There’s a copyright ID in the middle which seems to be some song that was licensed for the instructional VHS.

Some interesting things I noticed from a cursory watch: 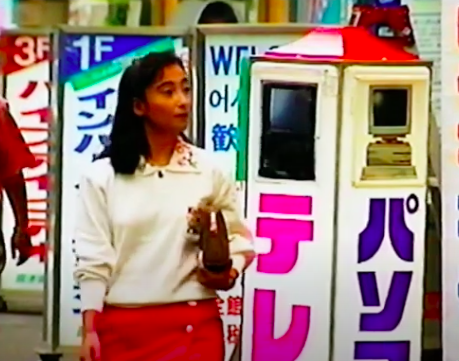 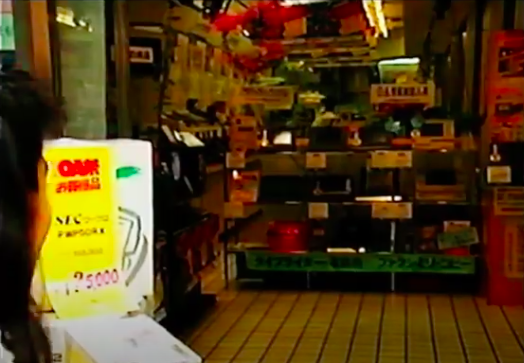 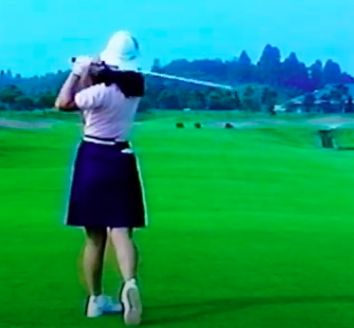 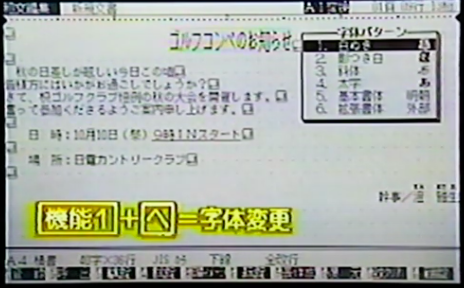 Key shortcuts are in Japanese (e.g. Function 1 + へ = change font,) because why wouldn’t they be? 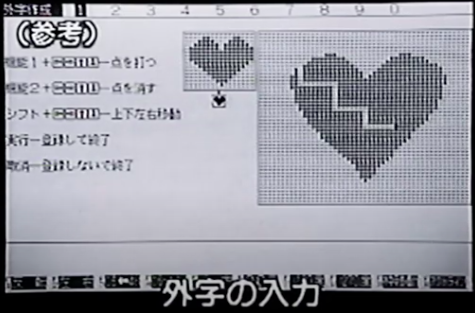 The custom character editor is shown off briefly. 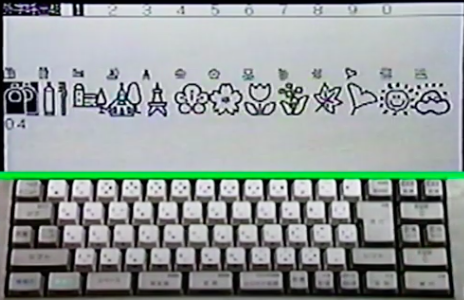 If you don’t have artistic talent, some provided clip-art will spice up your boring office memos. 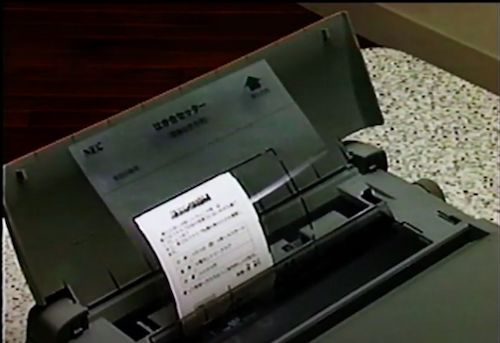 Of course it does transparencies. This is still 1991, after all. 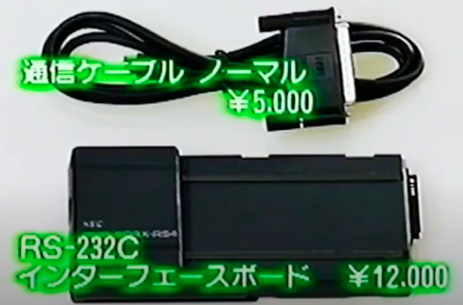 The very end of the tape shows off things you can buy in order to improve NEC’s profits for the quarter. There’s a lot of cool memory cards, like English spell check, and a pack of fonts. It also has some neat gadgets, like a hand-scanner, the RS-232 module (pictured,) a clip-on paper stack feeder, and two different modems. There’s even a carrying case!

This was a bit light compared to the previous archival effort, but it still took time, and produced a delightful little artifact. This word processor is bursting with features, and maybe it will even help me perfect my golf swing, too. 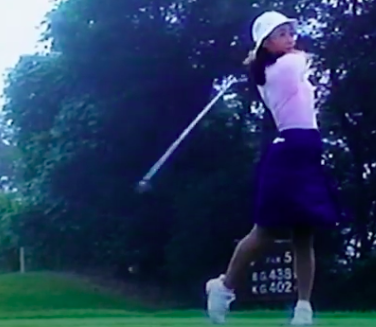 I didn’t notice any coverage of IPL.COM inside the VHS, or even the basics of how to get CP/M to boot. We’ll see what we can do about that soon.

This article is part of a series:
mini5 Madness 2022

Studying (and taking apart) the NEC mini5 line of word processors for RetroChallenge 2022/10.