Just as I was beginning to lose hope that the hard drive I had ordered back in August from Yahoo Auctions Japan would ever arrive, my doorbell rang. Inside a beat-up but functional Suruga-ya box sat the hard drive, done with its international journey.

On the NEC PC98, the hard drive goes in a little metal sled, and is connected to an edge connector which slots into the front of the machine. The idea is that you can do a hard-drive replacement without doing anything other than pulling the front of the case off - no need to pick up heavy monitors or disturb a user’s desk. No tools necessary at all, which is more than I can say for most early-90s computers.

When I first bought my PC98, it didn’t come with a hard drive - which was okay, I can source one - but it also didn’t come with a sled or the edge connector! I had to look for awhile before I finally figured out what kind of bus my AP2 supported out of the box (IDE) and which part number provided the sled (PC-9821A-E05, though that is just for the 120MB version - there were many other sizes of hard drive made available). 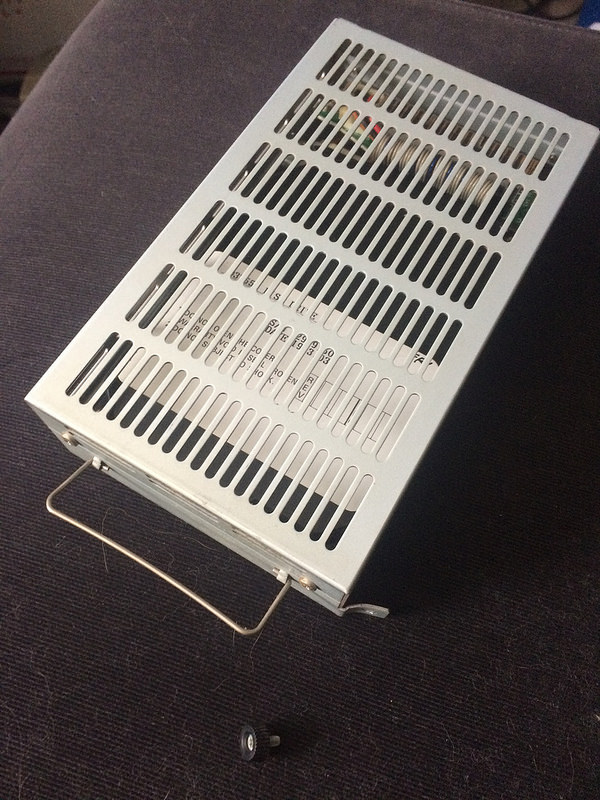 The first thing that was obviously wrong was that the little metal mounting tang was badly bent. If I put it into the machine, the tang would keep it from fitting flush into the connector. I started dismantling the drive sled so I could fix the metalwork with a hammer, if necessary.

Four small pan-head screws hold on the top of the sled case, and when they’re removed, you can see the actual drive as well as the NEC adapter board that provides an IDE interface to the fileslot. 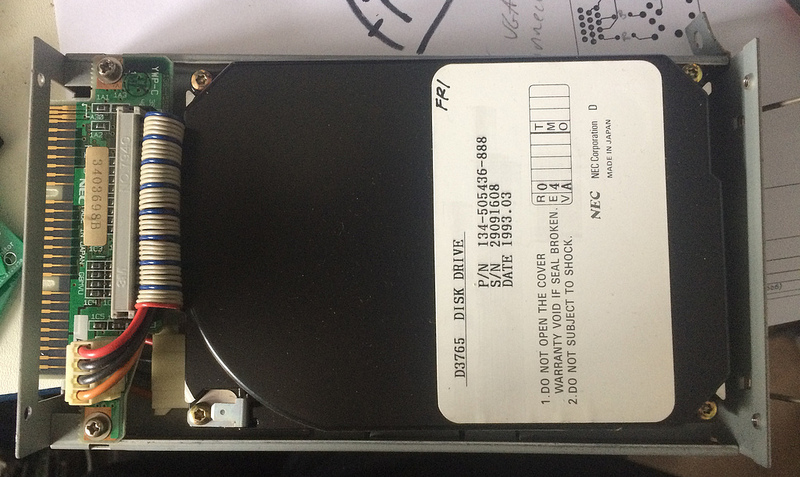 The fileslot is a pretty neat idea, in theory. If I installed a SCSI controller, I could get SCSI instead of IDE through this same drive sled bay. The SCSI sleds have a different interface card, but physically they’re interchangeable. There’s another 100-pin connector on the front of the machine, which is intended for optical media or other things that go into a 5.25” bay, but is actually a front-mounted C-Bus expansion card connector, so there’s lots of potential here for cool peripherals.

I removed six more screws (four for the hard drive itself, two with washers for the board) and removed the guts from the metal casing. 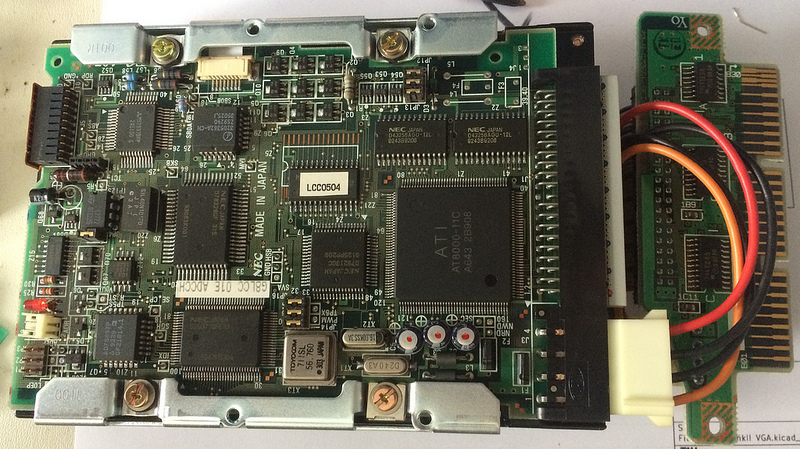 I’ll try to get some better pictures of this later, as I was debating making my own hard drive interface card while waiting for this one to arrive. Eventually, laziness won out I determined it was probably too risky to make this weirdo edge connector. 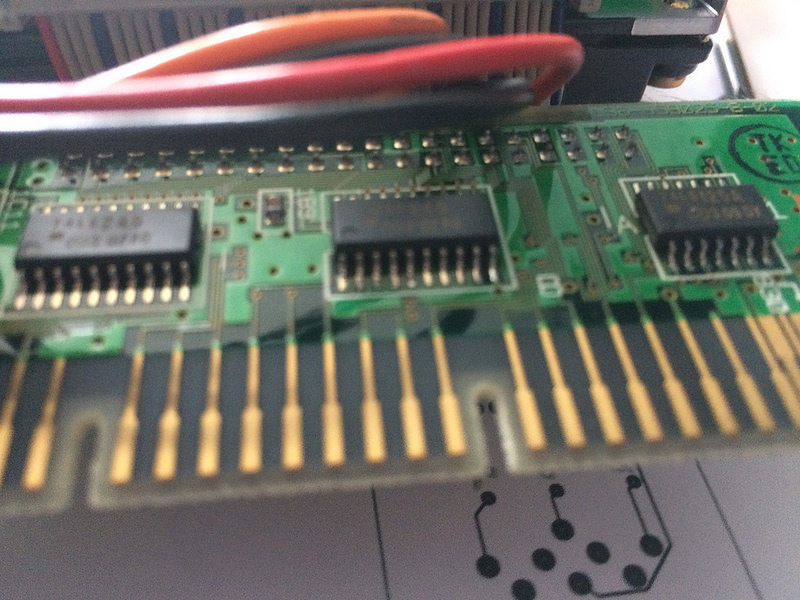 Some 74LS246 bus transceivers here. I’m guessing at least part of the IDE bus controller is implemented on this little board, rather than inside the Fileslot mezzanine board that it plugs into.

Now that the case was loose, I pried it against my metal workbench for a few minutes to use as a right angle. I’m not a machinist, but it definitely made it a lot better. 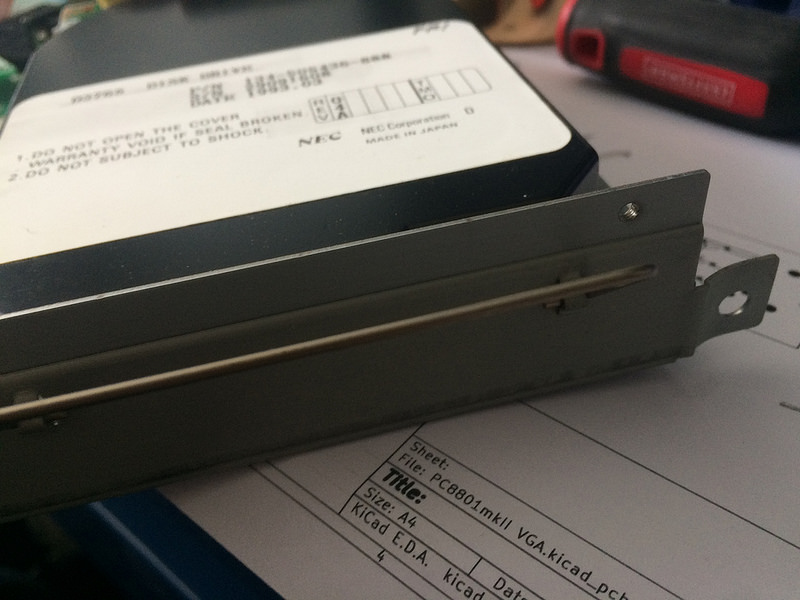 After reassembling the hard drive into its sled and tightening all the screws, I slid it into the front of the machine. Nice tight fit, and the included thumbscrew lined up with both holes now that the tang had been bent flush again. 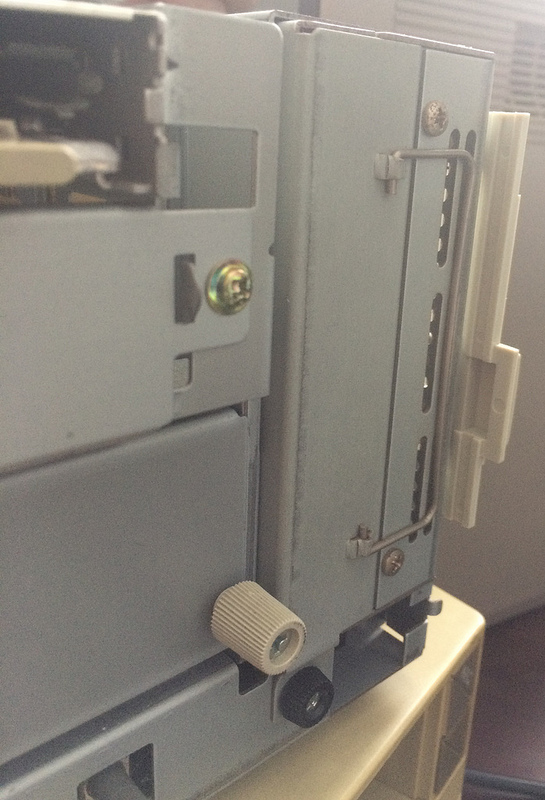 The PC98 refused to boot off the hard drive, treating it as if there were no bootable volumes when a floppy disk wasn’t inserted. I was a little confused by this, since the ad on YAJ clearly showed that it had a bare-bones DOS install, but decided to just format it from one of my boot disks and copy over my own bare-bones DOS install.

I would imagine formatting a hard drive without knowing how to read anything the format utility is telling you is much more harrowing when there’s data on the hard drive you actually care about. In this case, I proceeded with blissful ignorance. 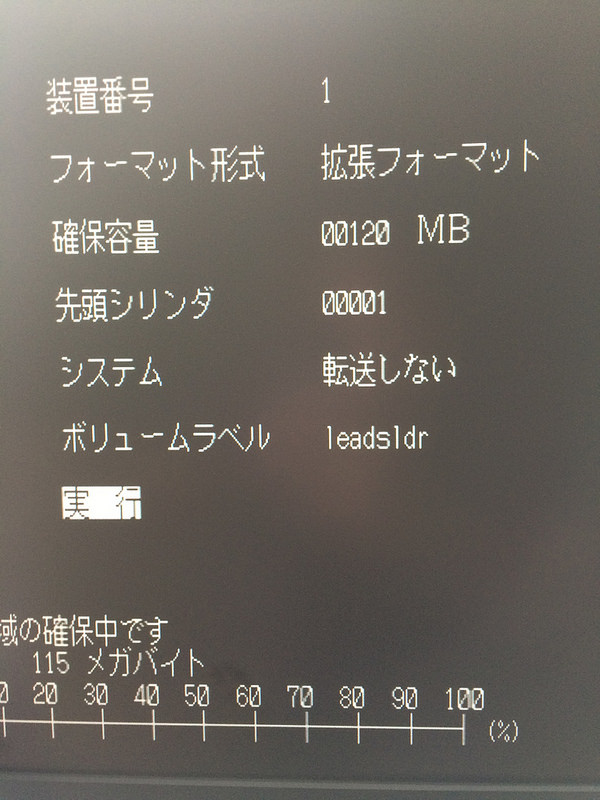 I resorted to an online PC98 hard-drive formatting guide to figure out what the rest of the screens meant; the NEC format utility is not exactly user-friendly if you don’t know how to read.

Eventually, I was able to reboot into a working MSDOS environment on my very own hard drive. Apparently, I haven’t been this excited about a hard drive since 120MB drives were new.

The first thing I tried was to install A-Train III, but the installer kept complaining it couldn’t find the source floppies at drive A:. On the PC98, unlike IBM PC MS-DOS, the drive you boot from becomes the A-drive.

I assume I have to boot from floppy, swap disks to the A-Train III installer, and then keep swapping for the data disks, but I just got a hard drive. I don’t want to boot off floppy disks already!

What’s the next best thing to A-Train III? 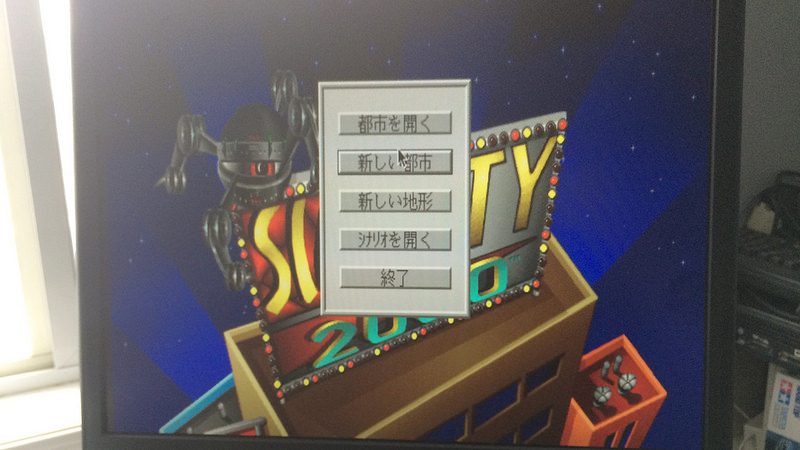 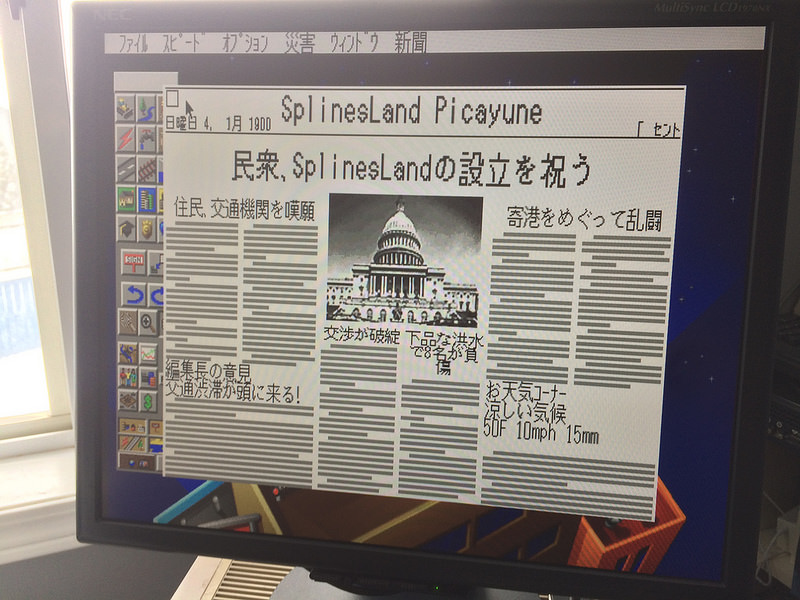 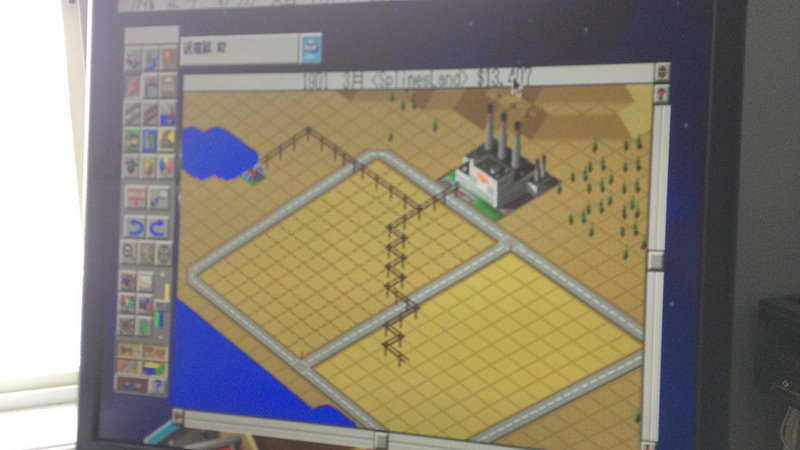 I’m not entirely sure why I just spent all this money and effort to play SimCity 2000, which I already own, except now in a language I don’t understand. Oh well; even these Sims deserve a competent mayor.