Pulling up and jiggling the key to free up whatever was stuck on the contacts inside the switch worked for a time. However, it was annoying to be hammering out a BASIC program and then have to back up an entire line to hammer the “I” key repeatedly just to fill out the statement. 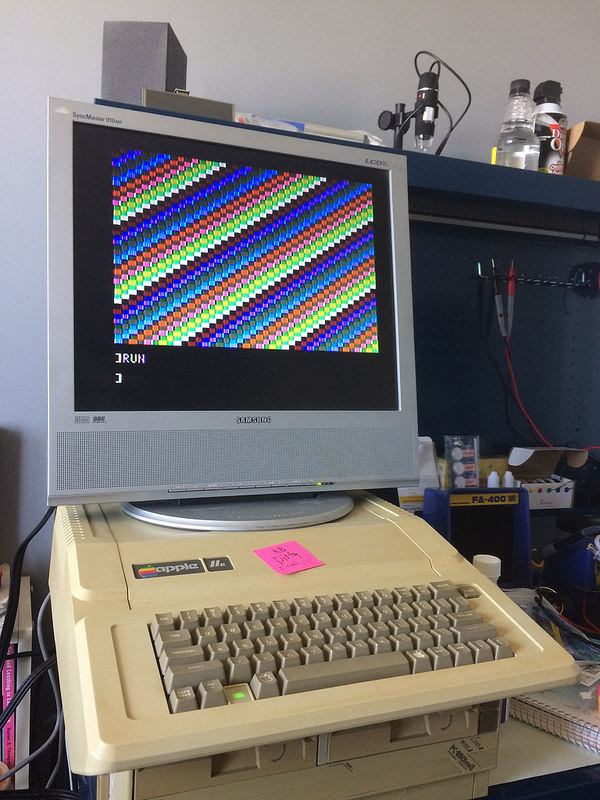 I have a similar problem with my PC-8801mkII keyboard (its “N” and “X” key switches are gunked up), but that’s a story for another time.

I ordered some key switches from a super nice seller on eBay, and soon they arrived. Then I kind of sat on it for a few months, because I had other stuff to play with. Today, I decided to crack into the Apple IIe’s case and take a look around.

Taking the Apple IIe’s top case off is really easy. You’ve got only a handful of screws to remove, and the heads are chunky and proud of the surface so if you do cam one out, it’s easy to remove with screw pliers. Those screws thread into speed nuts, not Commodore-style moulded plastic, so if you strip the threads out of the case, you can just go down to Home Depot and spend a couple cents for a replacement. Kudos to whoever designed this thing.

Once the keyboard is out (with an easy-to-remove ribbon cable that’s keyed,) I started taking a look at the board.

The first thing I noticed was this gunk on the back of the keyboard’s PCB. At first, I thought it might be old flux, but it’s in spots that didn’t make sense for there to be flux residue. Someone probably spilled orange juice or soda into this thing at one point, although I’m not going to lick the board to find out. A little isopropyl alcohol cleaned this right up. 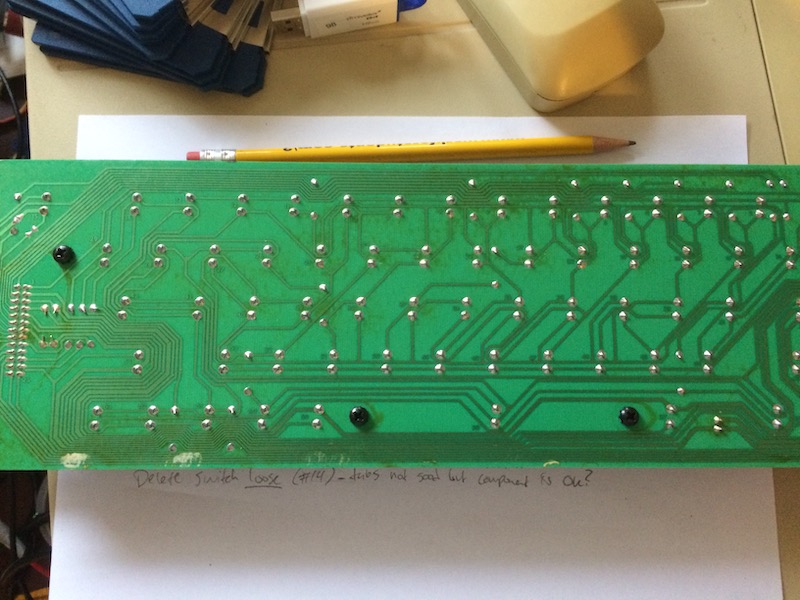 The “I” key is position 24 on the back of this well-silkscreened board, and a continuity test verified that the key was only making extremely intermittent contact (fewer than 1 in 20 times). 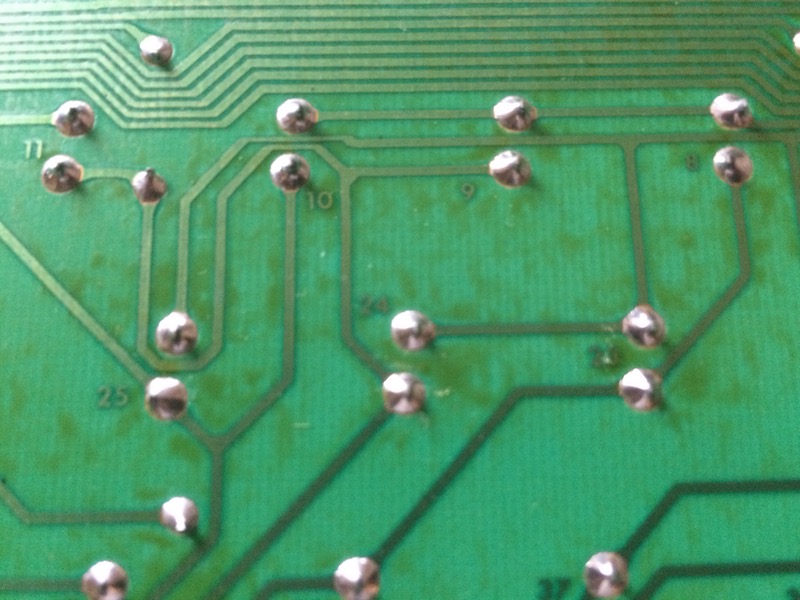 While I was looking at the keyboard, I noticed that the top of the keyswitch for the DELETE key was falling out. Since this wider-than-normal key is not stabilized and really should be, the DELETE key appears to have levered its own switch to pieces over the years. It looks like someone in the distant past had once tried to glue it down, based on the residue around the lip. 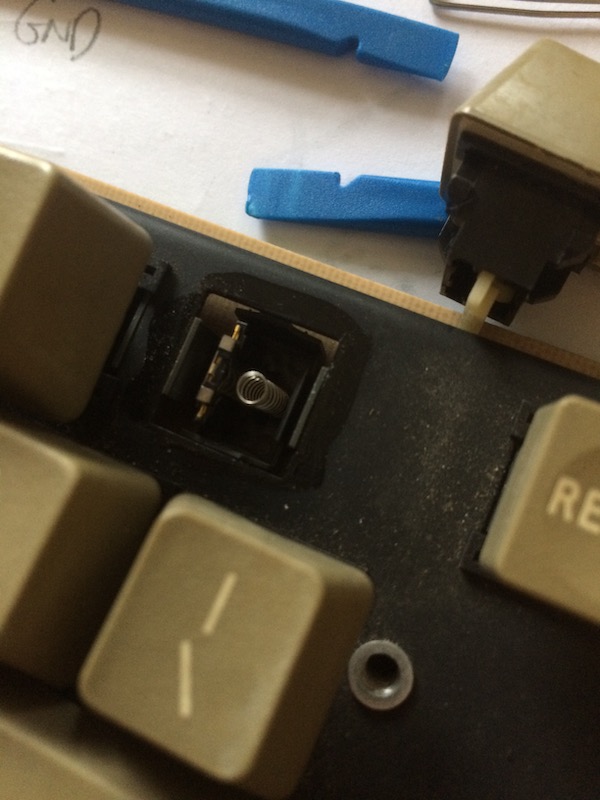 I tried messing with this a few times but couldn’t get the bottom to clip onto the top to retain it. I’m guessing something has broken off the top half of the retainer, and it no longer mates properly with the bottom half. For now, I just gently reinstalled it - I’ll replace the whole switch.

Before desoldering anything, I decided to get my replacement key switches out. That’s where things went wrong - instead of the tan half-plus switches that I had in the IIe, I had purchased black full-plus switches. They felt good, and physically fit the key caps. However, they have different spring weights, so I would get different letters with different feel. That would probably drive me insane, unless I desoldered the entire board and tried to use the different switches for different tasks (firmer numbers and accelerators, softer letters maybe?)

Also, after eyeballing it, I wasn’t sure if the pins on the black switch were just a few millimetres too far apart to fit through the board or not, so it would be a pretty bad idea to start desoldering switches without first doing more research. If anything goes wrong, I don’t want to clutter my workbench without a plan or parts to put the computer back together quickly.

My best guess is that these black switches are switches for a “Platinum” IIe, which this machine is not. I should have checked under a keycap before ordering these switches. 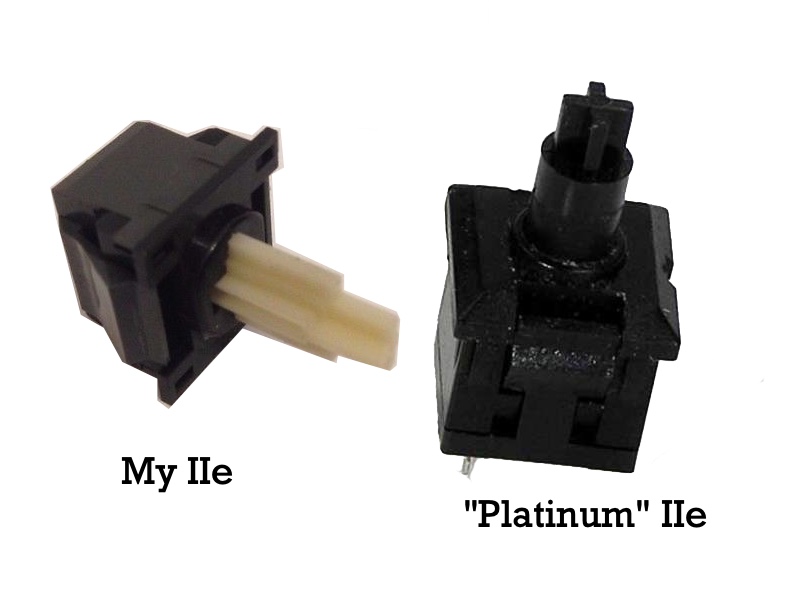 Apparently I have Alps long-stem keyswitches, and bought SMK ones instead. Somehow, Alps has found a way to get me again!

With some disappointment, I put the whole machine back together. Back to eBay to find some more switches!