Through the more-than-generous offer of a ColecoVision, I now have a real machine to use as a basis for comparison. Just what is the real machine like inside, and could it possibly be better?

The last entry left a sour taste in my mouth: it was frustrating not knowing if the problem was with the Leako, the controllers, or both. I didn’t want to release the files unless I was pretty sure that the Leako was working semi-properly. Imagine my relief when the mailman gruntingly hefted a box full of Coleco-y goodness onto my porch, and then laid a patch trying to get away from my block before I could come out and talk to him about Fujitsus. Now I’d get to test it against a real console!

Aaaah! Halloween magic is making 1980s American electronic products rise from the dead! Save yourselves! Seriously, though: Halloween magic only works on European game consoles, so make sure you put out your garlic in case an Amstrad GX4000 tries to bite you on your way to the mailbox.

SA goon famiclone sent me this ColecoVision, along with a Super Action Controller and some games. There were also some other projects in that package, but we’ll get to those in a later entry. I am hugely grateful for everything! 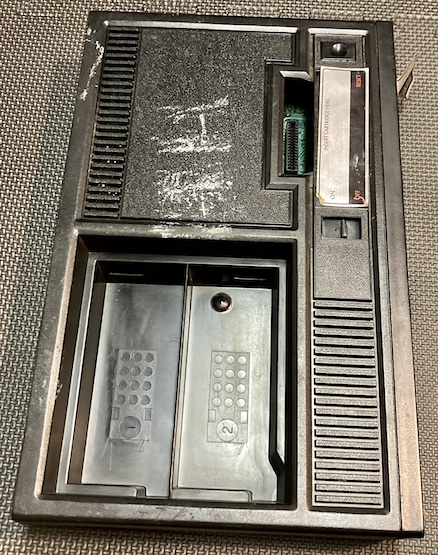 This ColecoVision has been through a bit, and came without Hand Controllers or a power supply. It’s covered in sticker residue, is missing a bunch of screws, and someone tried removing the foil stickers on the front. Contrary to popular belief, you don’t actually have to do that: once the bottom screws are removed, you can sort of wiggle the case forward until the back lifts, and then wiggle it backward until it moves off the top.

I did a quick test using the ColUSB modern power supply. Just as it had with the Roller Controller, the ColUSB refused to turn on using my Monoprice USB-C PD power supply. The ColUSB manual warns against “quick chargers,” so I guess it does not contain the logic required to negotiate with the supply.

After finding a USB-C to USB-A cable in my pile courtesy of an AliExpress photo light, I connected it to an iPhone charger and flipped the power switch. Unfortunately, the video output was bad, with scrambled, blurry output that didn’t seem to resemble the “hey, put a cartridge in” screen. However, it was video output.

I decided that I would open the console up to look for damage, and also clean out the power switch while I was in there. 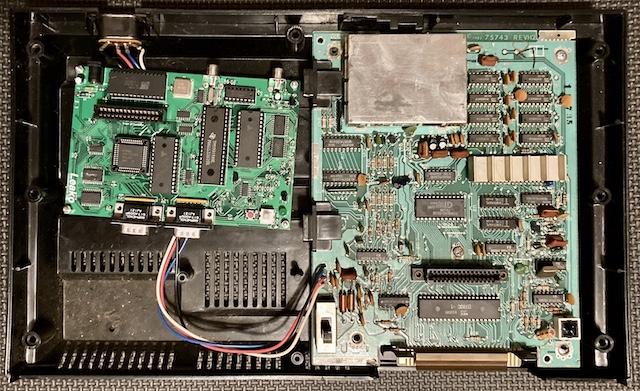 Inside, you can see that the Leako is not really that much smaller than the original motherboard. The giant RF can, the extra video RAM in the top right, and the expansion edge all contribute to the larger size of the original recipe. Surface-mount technology has only helped a little bit – those 62256s on the Leako are still quite large. I should probably put a heatsink on that TMS9918, too. 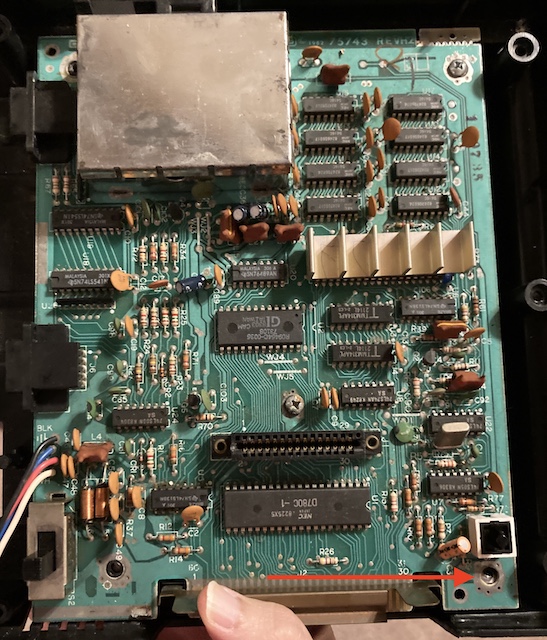 I noticed that the RF shield on the bottom had moved off of its screw-hole post and was making contact with the underside of the board. However, it just seems to be bridging from the ground pin of the reset switch to the ground pour of that hole. 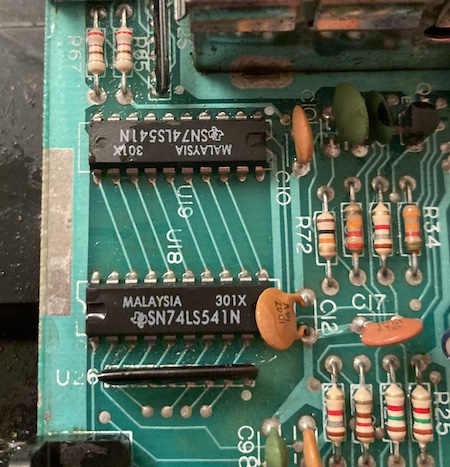 When I was reading the original schematic, I wondered why the controller-buffer LS541s had their data pins in opposite order from each other. Now I know: it’s for this super-cool-looking routing. A conspiracy-minded repairperson would posit that they knew these babies would blow up all the time, and so they wanted to try and prevent trace damage when the end user was desoldering them. Not me, though. I figure it was just late at night, they had a little extra PCB room, and they wanted to show off a little. 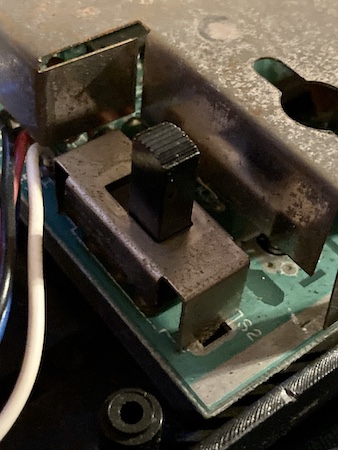 At last, what I thought was our nemesis has been exposed: the ColecoVision’s infamously unreliable power switch. Although a continuity test passed, I figured it couldn’t hurt to blow the switch out with some isopropyl alcohol and cycle it a few dozen times. This is a dual-throw switch; the power switch toggles both the +5V and +12V lines of the system, which means we can easily end up in a situation where oxidation of the switch causes just one of the rails to droop or go missing altogether.

Once the motherboard dried out a little, I made sure to use my access to the back of the power plug to make sure the ColUSB was serving up the right power. Only the +5V rail is explicitly called out on the motherboard, so I had to check the schematics to figure out what each wire should be.

Huh. Okay, so the machine isn’t able to pull enough current and the voltage is sagging in response. I could faintly hear what I thought was an inductor squealing inside the RF unit. I checked for shorts around the board, and then tested the resistance across the power switch on both sides (12V and 5V,) and found it close to 0Ω.

That’s when I looked at the Apple USB phone charger I had been using: 1A. While certainly more than the 500mA I expect from USB, it’s nowhere near the 2A that the ColUSB manual asks for. I went and grabbed an “Anker PowerPort 4” off my nightstand, which claimed a per-port source of 2.4A.

Once that was plugged in and the switch flipped, the ColecoVision at long last leapt to life. 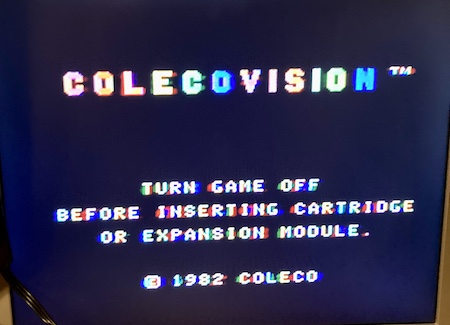 Somehow, since the last entry, the Samsung 910MP TV has magically healed itself, and worked hard on displaying the Coleco’s RF output. That said, the RF quality is really terrible, and the sound was even quieter than I remember from childhood, so there may be other things to fix in here. But now I can play games.

The first game I tried was Turbo, with the steering controller. I had expected this to work perfectly, proving that there was a problem on the Leako’s board. Unfortunately(?) the exact opposite happened, and the little race car slowly drifted helplessly to the right as I frantically spun the steering wheel, eventually sliding first into the FIA curb and then the Armco on the side of the track. Only the gas pedal seemed to work, and if I swapped control ports such that the steering wheel was plugged into port 2, the game wouldn’t proceed past the “skill select” menu.

The same phenomenon happened on Slither with the Roller Controller; although I could swear I could move up and right a little easier than before, I would never call it “responsive” or “arcade-like.” Sliding down and to the left was again a lot smoother, and if anything I would say it was a little better on the Leako than on the real thing.

It seemed that the quadrature controllers from the previous entry really were bad, which is a little bit helpful, but not particularly reassuring that the Leako is working properly. As an aside, it was kind of fun to be plugging the Roller Controller into the same USB charger that the ColecoVision itself was plugged into. Felt subversive in a way.

It’s not all bad news, though: the black monolith can still play a mean game of Time Pilot, although my fabricobbled arcade joystick couldn’t come along for the party due to there not being enough room left on the desk. And I’m very grateful to have an actual unit around, even if it will need a little bit of cleaning, and a composite or RGB mod. After all, you never know when an Adam might appear, and I don’t yet have an expansion slot on the Leako…

All this just goes to show you that if you want to get a ColecoVision for cheap, you should first spend a couple dozen hours becoming infamous as “that guy with the weird ColecoVision clone,” build an entire functioning unit, and then just ask people you already know if they have one in the basement.