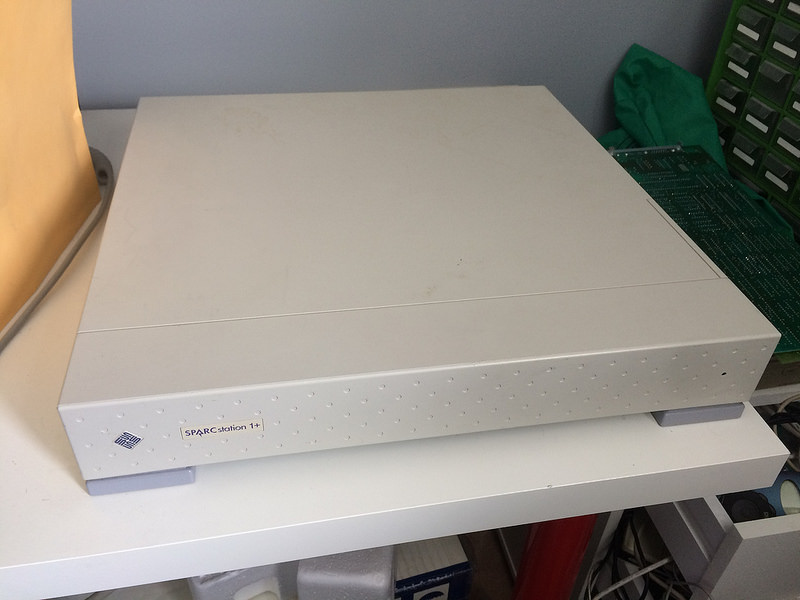 One of the things it needed was some kind of video card - it looked like the person I got it from had gutted it, so I purchased a Turbo GX SBus “framebuffer card” off eBay and prepared to install it.

These things are really easy to get open. Just two screws on the back and you can slide the whole top off, similar to a Mac LC but with less cringing as you hear irreplaceable UV-corroded plastic angrily snap. 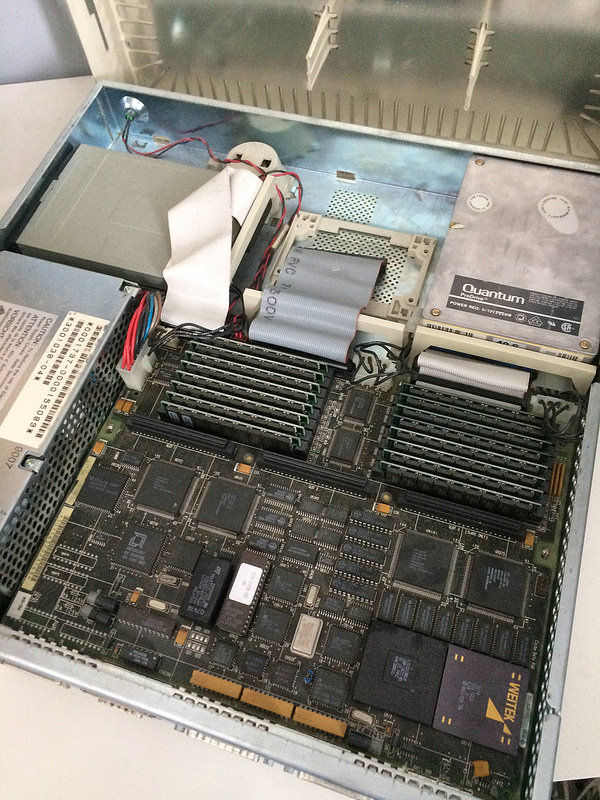 I was somewhat pleased to see that there was still RAM (every slot filled, even!) and a hard drive (even if it is a Quantum ProDrive: I’ve seen a lot of dead ones, including the one that came with my Amiga 2500). 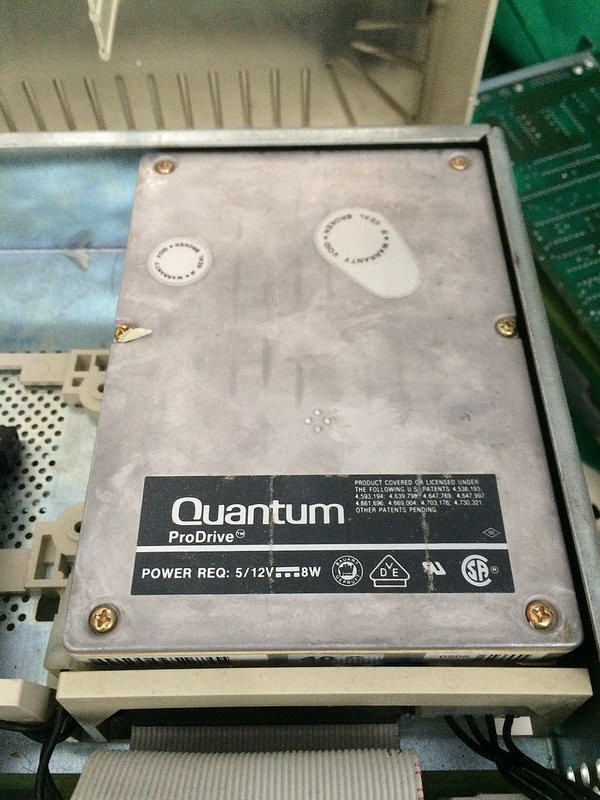 Here is the Timekeeper chip, which you’ll probably see again in a future entry when I fix it. Like most Timekeeper chips, this one contains an internal lithium battery which runs dry. When it does, the NVRAM resets to defaults. Unfortunately for the early SparcStations, the Ethernet MAC is set in this NVRAM. 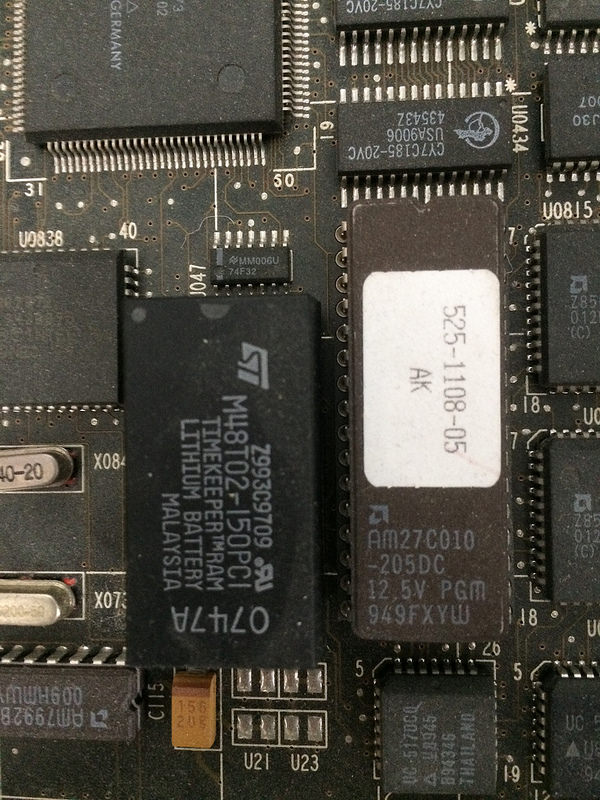 At first, the Turbo GX card didn’t want to fit into the opening on the back of the machine. 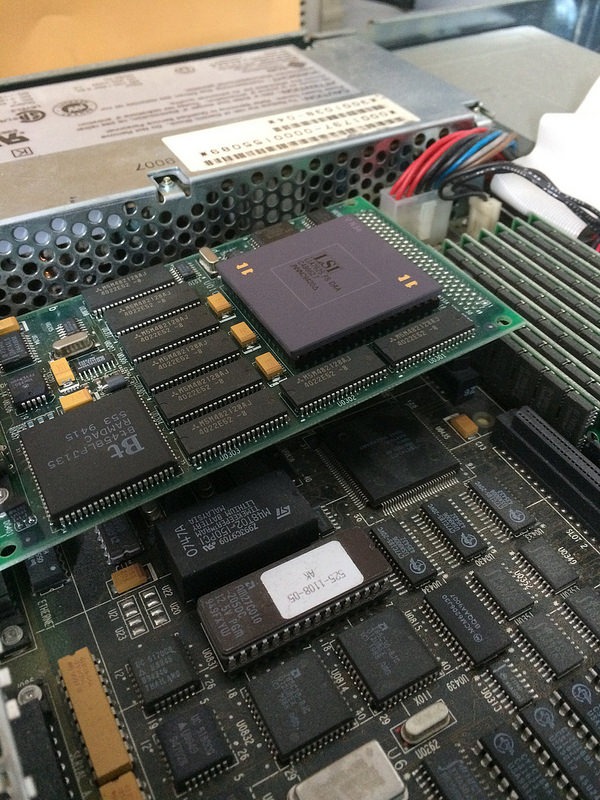 I grumbled and groused, before taking a break and doing a Google Image Search to make sure that I had the card I thought I did. That’s weird, none of the cards in the pictures had this little metal bracket on them. I unscrewed the bracket, and sure enough, the card fit right in with a satisfying click.

After digging out my SGI (remember this for later) 13W3 adapter and plugging everything back in, my VGA monitor was unable to detect anything at all coming out of the SparcStation 1+. Thinking it was perhaps a misconfiguration in OpenBoot/Open Firmware, I decided to try and get a serial terminal on the machine using my old Power Mac 8500 (hey, it’s on the same workbench), an incredibly long pile of serial cables, trial and error and ZTerm.

Eventually it worked. I am not very good at this whole serial thing, but it helps to pick out DB25 cables that aren’t missing their pins. 9600 8N1 was the right setting for the serial terminal, as I found online when searching for the speed and configuration. 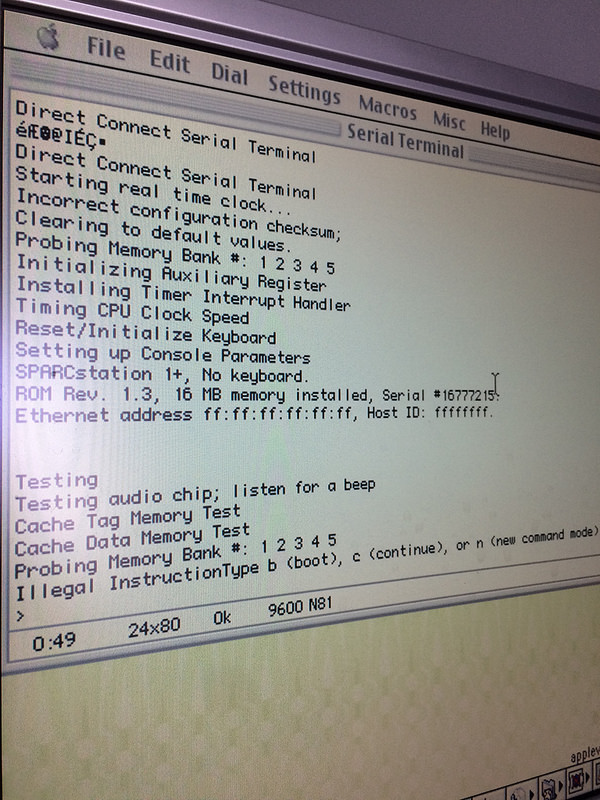 Remember all that RAM crammed into the machine in the previous photos? Yeah, that’s sixteen whole megabytes. Don’t gasp so much, you’ll pass out.

Everything seemed healthy on the pre-boot process, up until it actually tried to (I assume) load an operating system. Then we get this “illegal instruction” error. That’s not interesting, why don’t I have video? Let’s check printenv: 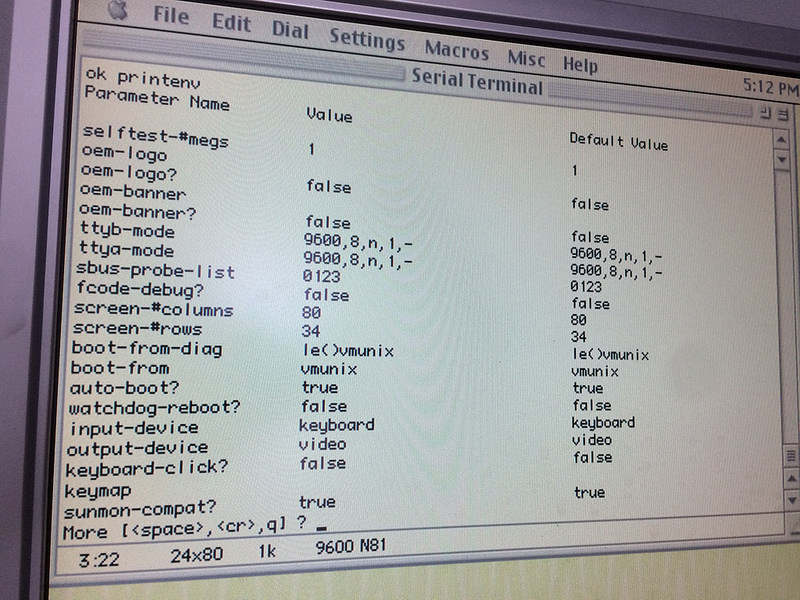 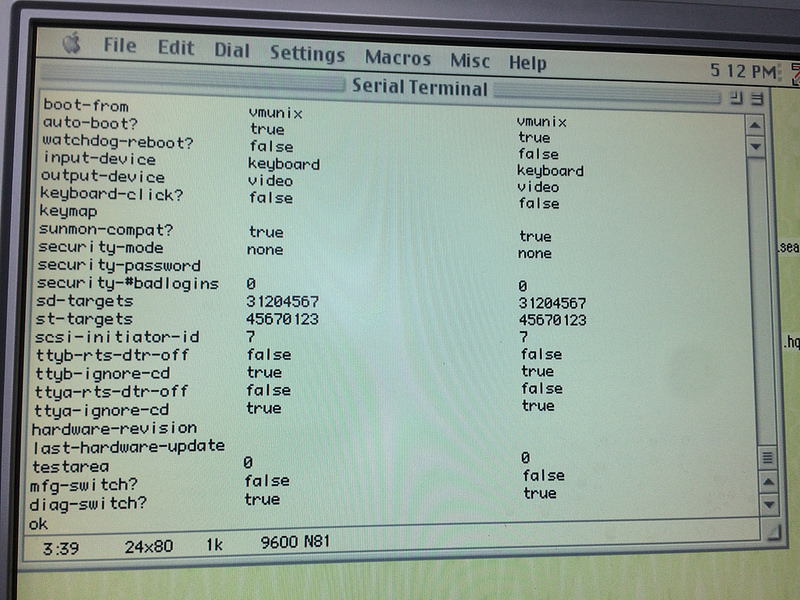 output-device = video sounds good to me. Why doesn’t it work? Oh yeah, because an SGI 13W3 adapter doesn’t work very well with early Suns like this, according to the Internet.

I’ll take my victories where I can get them: getting a serial console up on this old Sun and knowing that it works properly was good enough for today. Digging through the old cables and adapters I have in search of another 13W3 <-> VGA adapter can wait for some other time.

Update: It occurs to me only now (after having sourced another 13W3 adapter) that not having a keyboard plugged in is probably why it is dropping to the serial terminal; for some reason, I had thought that even if it was using the serial terminal it would still try to push video out onto the framebuffer. Time to find a keyboard!

This article is part of a series:
International SparcStation

Bringing back to life an obstinate little Sun SparcStation 1+.