I recently managed to snag a Type 4 keyboard, which should be period correct, off local classifieds, and gave it a shot. As expected, the keyboard plugs in, makes its noise (I was a little surprised it had a speaker inside it!) and flashes some LEDs. However, I still didn’t have video.

After opening the case and trying to change slots, I realized that I had not fully pushed down the graphics card into the S-Bus slot the first time I tried it. After inserting it fully, I still didn’t get any video, and the machine didn’t seem to progress as far in the boot as it did before. Back to the serial terminal! 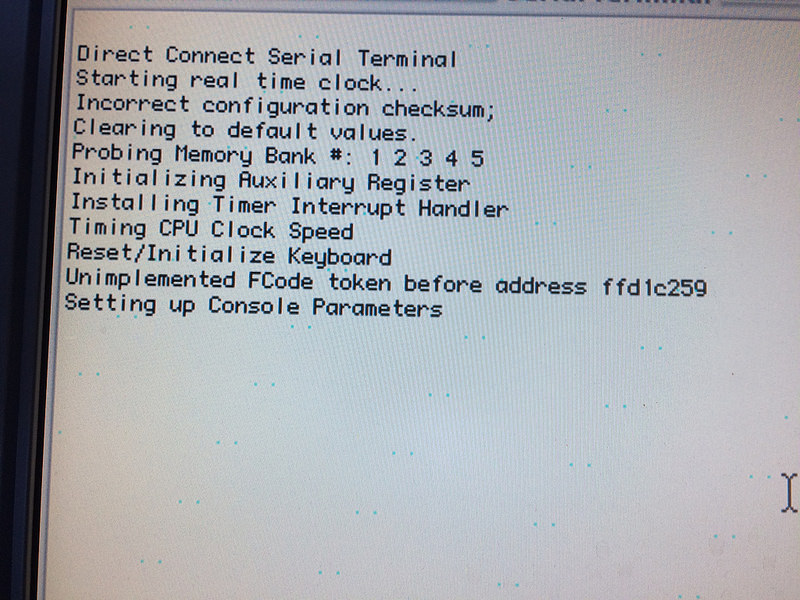 With the video card installed, the SparcStation hangs while trying to initialize the console. It only mentions the cryptic error Unimplemented FCode token before address ffd1c259. Since that’s a very high region in memory, I’m guessing it has something to do with the video card gets mapped into. Moving slots doesn’t change the address, but removing the video card altogether does make the error go away, and the boot process progresses until I encounter the boot > prompt as I did before.

After searching, I still don’t know what the fault is. I can only assume that the “TurboGX” 270-2325-04 video card I snagged off eBay is in fact not compatible with my SparcStation 1+, and was meant for a later model. Perhaps the card itself is bad. I will have to look for another known-good card and see if the machine will, at long last, produce working video.

In the meantime, I spent a little bit of time trying to boot the machine. The Quantum ProDrive installed in the computer can be detected with the probe-scsi command, but it doesn’t spin up, which probably means it has the same problem as the ProDrive in my Amiga 2000. Various permutations of the boot command only return the error “Illegal Instruction” with no context as to whether or not the drive even has a readable filesystem or bootable kernel image.

Update: The sunhelp “rescue” mailing list thinks it may be related to the ROM in my SS1+ being too old. The TurboGX framebuffer seems to want revision 2.x or higher, whereas I have 1.3 version 4:

This article is part of a series:
International SparcStation

Bringing back to life an obstinate little Sun SparcStation 1+.