There are a few schematics out there, but I shouldn’t have gone all the way to the Japanese internet for them. It turns out the FlashFloppy wiki had the schematic the whole time:

I’m not sure about the “6 -> 2” part of this; another diagram I found said that pin 6 on the PC98 is DISK_CHANGE, which is pin 33 on the 3.5” floppy. Pin 2 on the 34-pin is DENSITY; from what little I understand of floppy drives, it makes no sense to connect these two. I ended up routing 6 -> 33 correspondingly, though this might be the cause of a strange problem I seem to be having (more on this later).

Note also that I haven’t tried two of the same board in one machine, since I don’t have a dual-drive 26-pin ribbon cable.

I went through a few revisions of this board - my most boneheaded mistake was omitting the power connector entirely.

It’s a learning experience. I’m currently thinking about ways to tile my bathroom with the leftover PCBs. 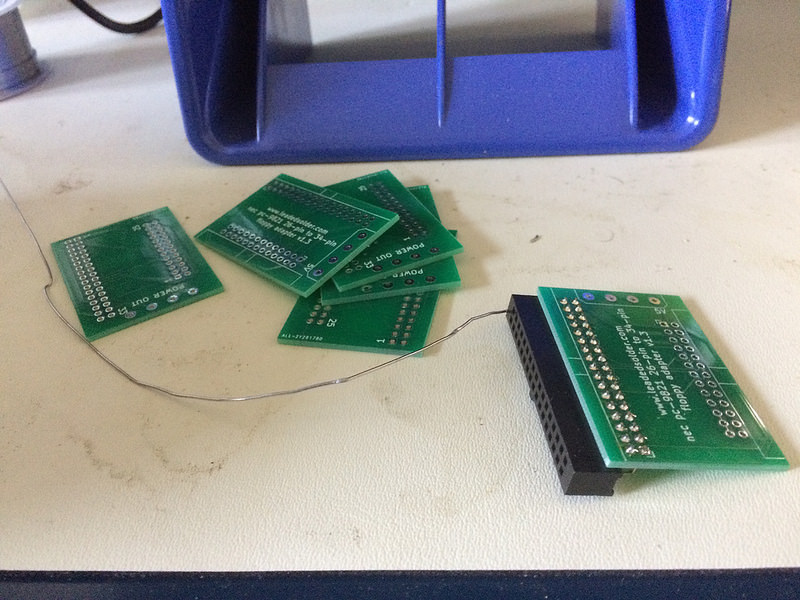 Since the Molex connector didn’t fit, I figured I’d just cut one of the very hard-to-find (in my city) floppy Molex-to-Berg adapters I had picked up for the PC88 and solder it on. Unfortunately, I didn’t realize the floppy power connector was on the other side of the board and the cables couldn’t reach, plus it looked bad. Hopefully some other project needs a very short length of Berg wiring in the future. 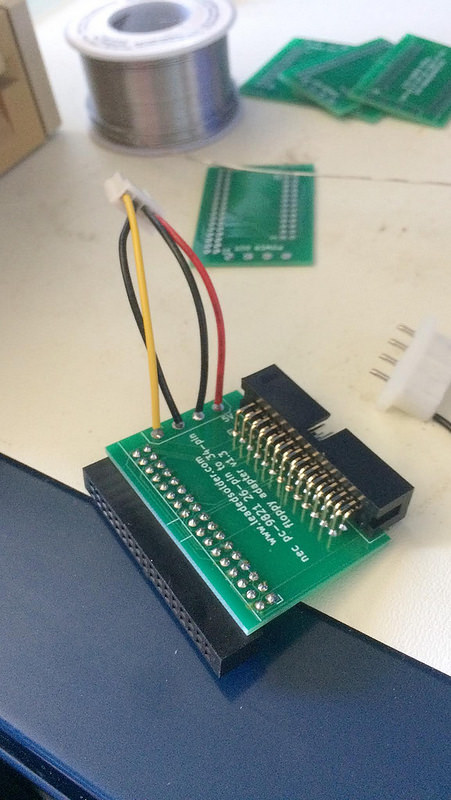 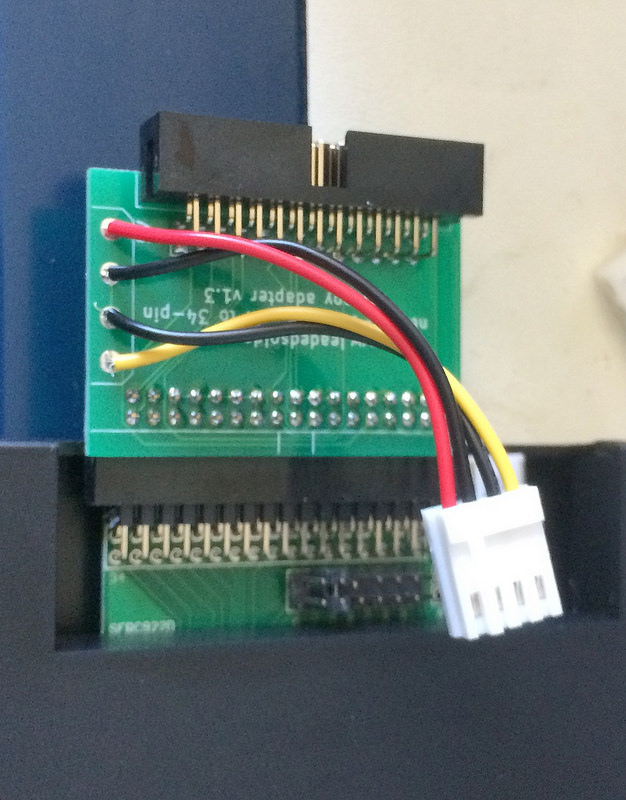 In the interest of time, I ended up just grabbing two male-to-female jumper cables out of my pile and soldering them on. Looks bad, works okay. 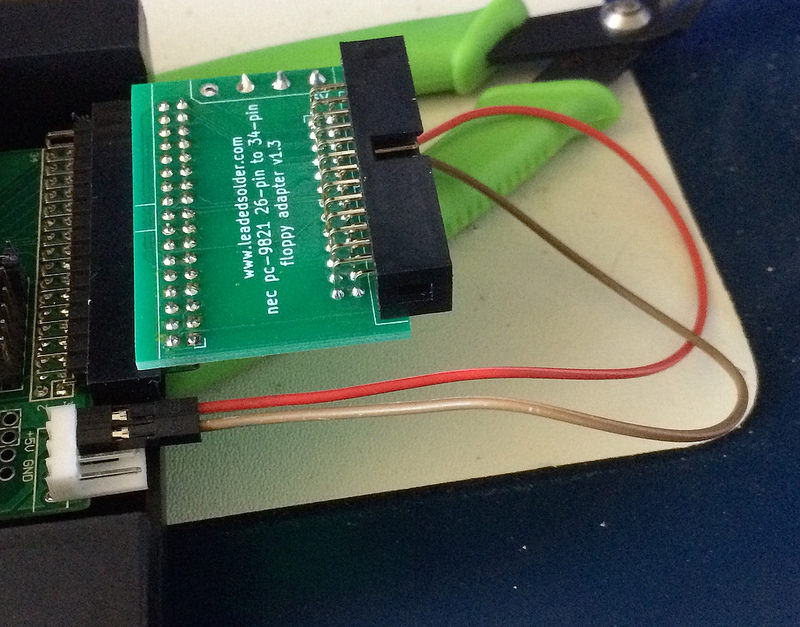 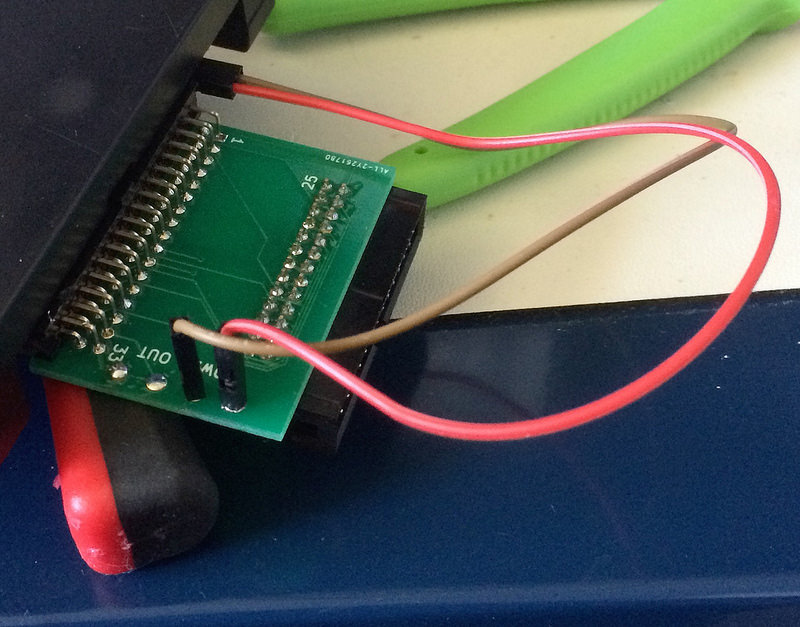 I also ordered a 26-pin header in the wrong pitch. Apparently you can get them in “very small.” Standard Canadian quarter for scale.

Eventually, everything worked out and I got a board that plugged into the Gotek in all the necessary places.

I’ve gone over this a few times already, but flashing the Gotek is basically this process: 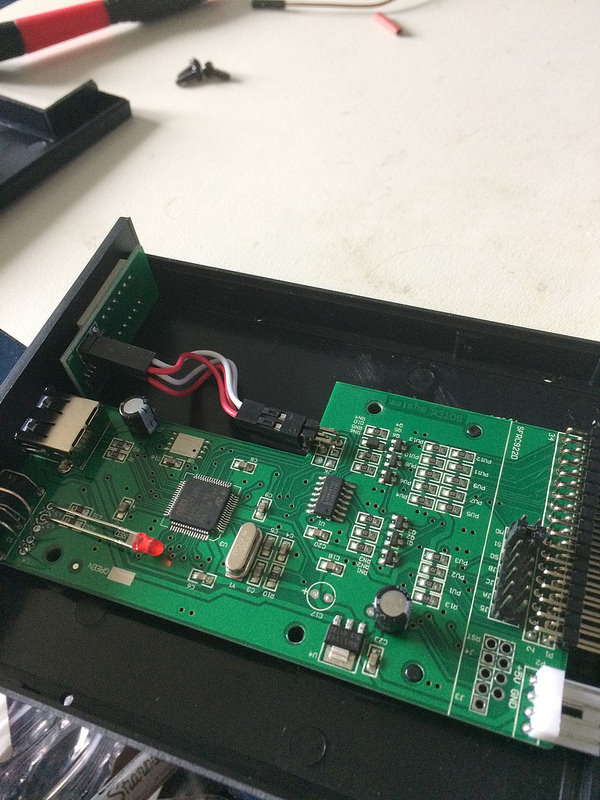 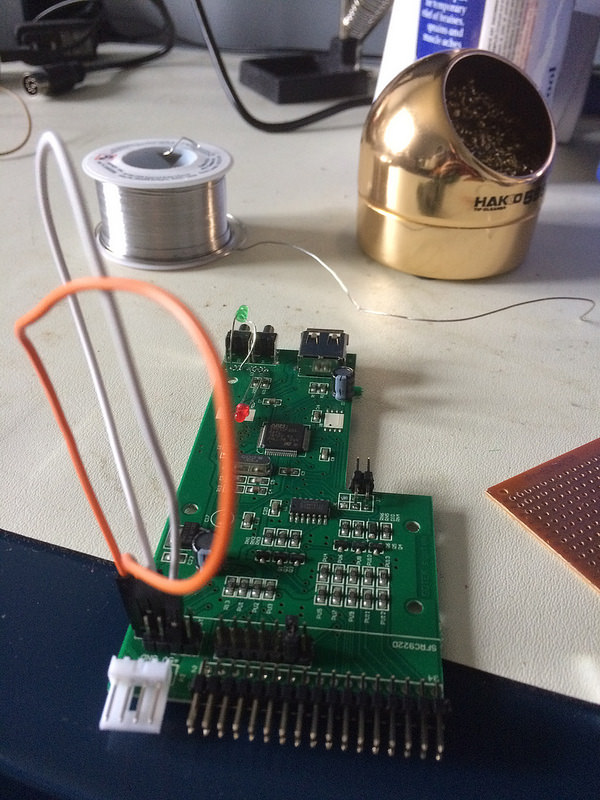 You need jumper wires because one of the connections is diagonal. More info in this great guide.

I used FlashFloppy 0.9.28a and the male-male USB cable with a Windows copy of DFUse.

Connecting to the PC98

Plugging it in isn’t too hard, assuming I soldered the connectors on straight. Pin 1 is red, and delivers five volts, so don’t get it backwards.

I also swapped the drive-select jumper on the Gotek itself from S1, which it comes stock as, to S0. There’s no ‘twist’ in the cable for drive select like there would be on an IBM PC. 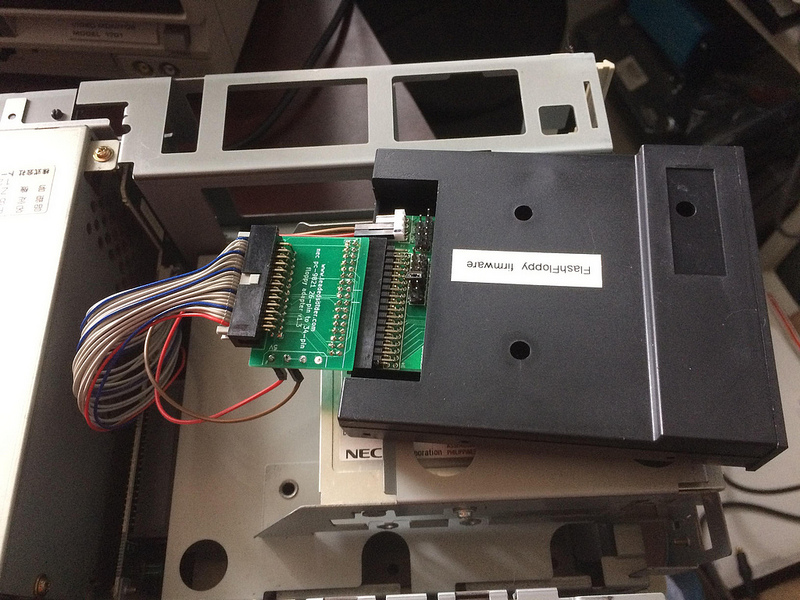 Let’s fire this thing up first without a USB stick. It comes alive, and then almost immediately goes to the “insert system disk” screen. This is a great sign, because I’ve seen with other PC98s running HxC or Gotek that it just lags for a long time before getting you there. This means I can still quickly boot off my hard drive (whenever it arrives from EMS) with the Gotek installed. 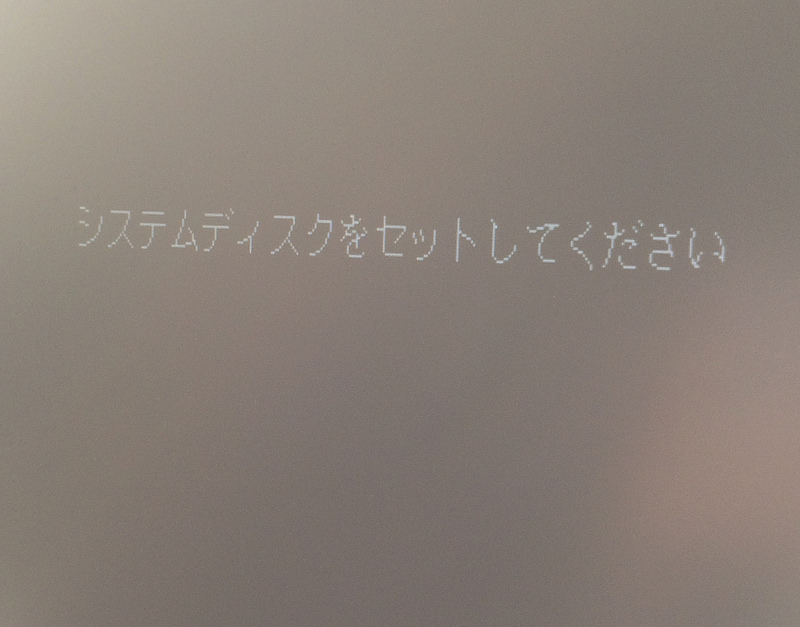 I pulled a fresh USB flash drive out of its package (like the baller I am), and then dumped an FDI disk image on it. The PC98 booted off the disk, and went to a DOS boot screen, and then… seemed to hang there. 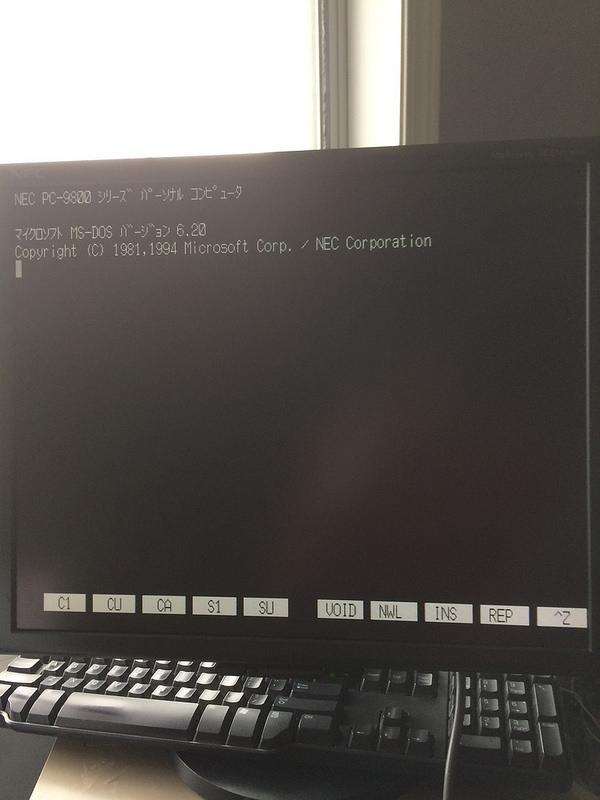 I’m not sure what happened, but after a long time I decided to tap the change disk button on the front of the Gotek. This made the computer wake up and proceed. It might be something to do with floppy sense (the DISK_CHANGE problem I mentioned above) or some hack that was done on this game when it was moved into its own disk image. I’ll try this with more disk images later.

I don’t necessarily own a license to Compile’s Marvel Putt Golf, but if they want to come and get some money from me, they’re welcome to it. In exchange for fanboy fawning. 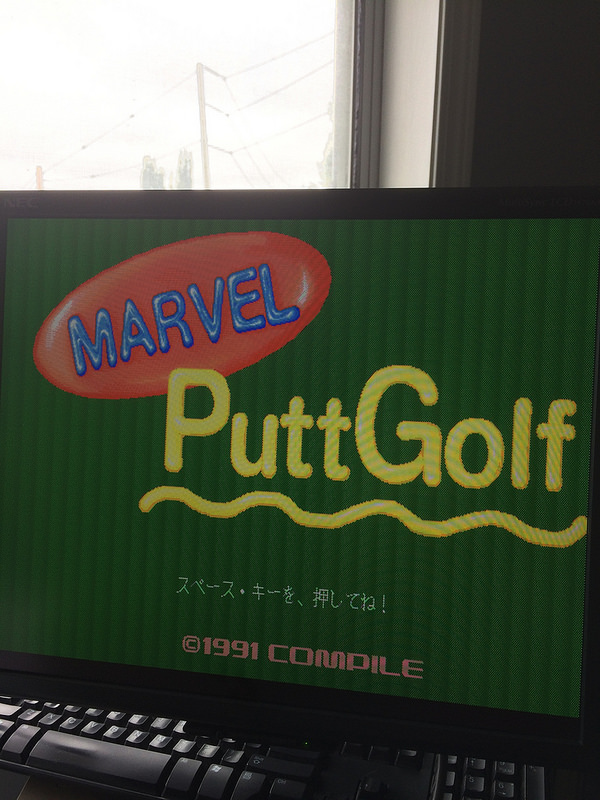 According to the place where I got it, this was part of a “DiscStation DS98 #04” collection. I’m guessing it was a freeware game or tiny demo done by bored programmers between big jobs. 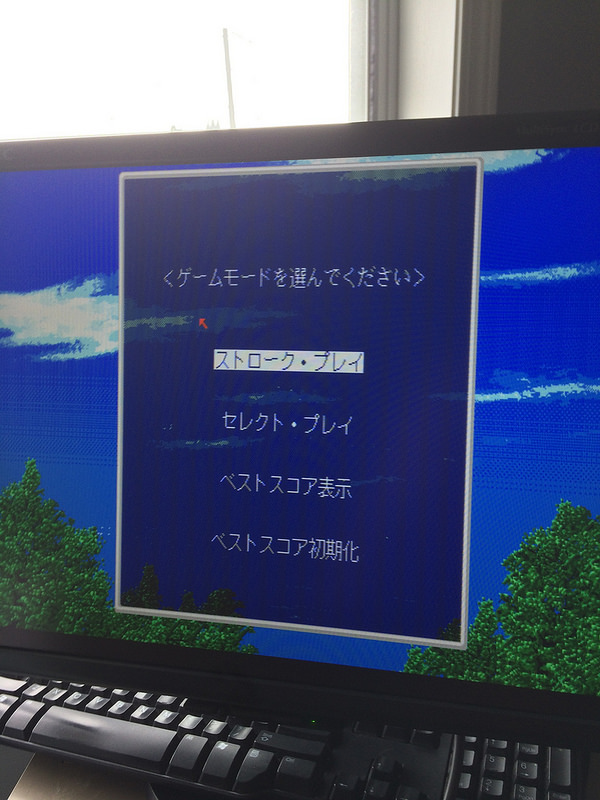 I’m assuming this is a main menu. When I hit return, it took me first to a (non-keyboard-friendly) name entry screen, and then to choose whether I wanted to play the front nine or back nine of a course. Let’s start with something simple… 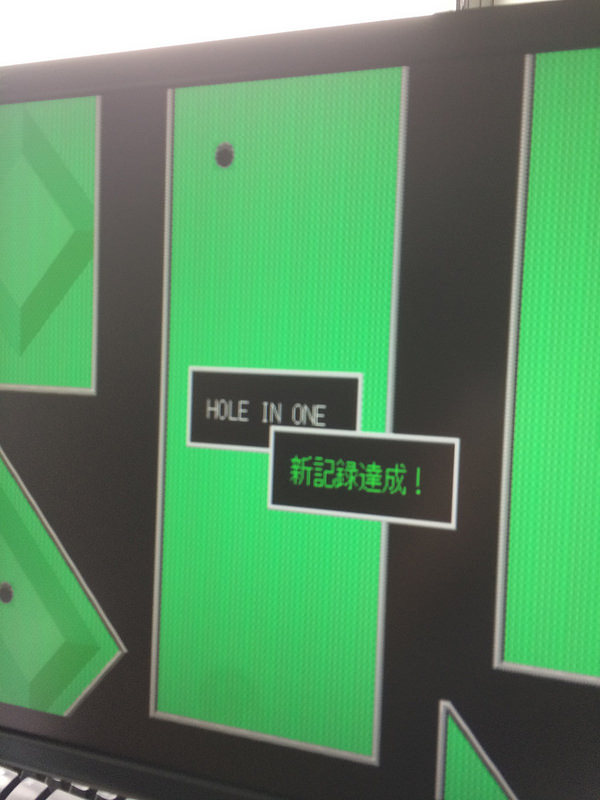 Maybe too simple. That’s as good a place to leave this entry as any.

I’m expecting my next update to be about the colour video for the PC88, as the adapter board I designed to avoid having to chop and splice DIN cables is nearly here - if you believe UPS’s lies.