The red ones go faster

First, and most attractively, is this red Sony “HitBit” HB-101. This is an MSX1, which means not much RAM, not much CPU, and slow graphics, but in its defense it’s red. I will probably get an MSX2 later if I fall in love with the platform. 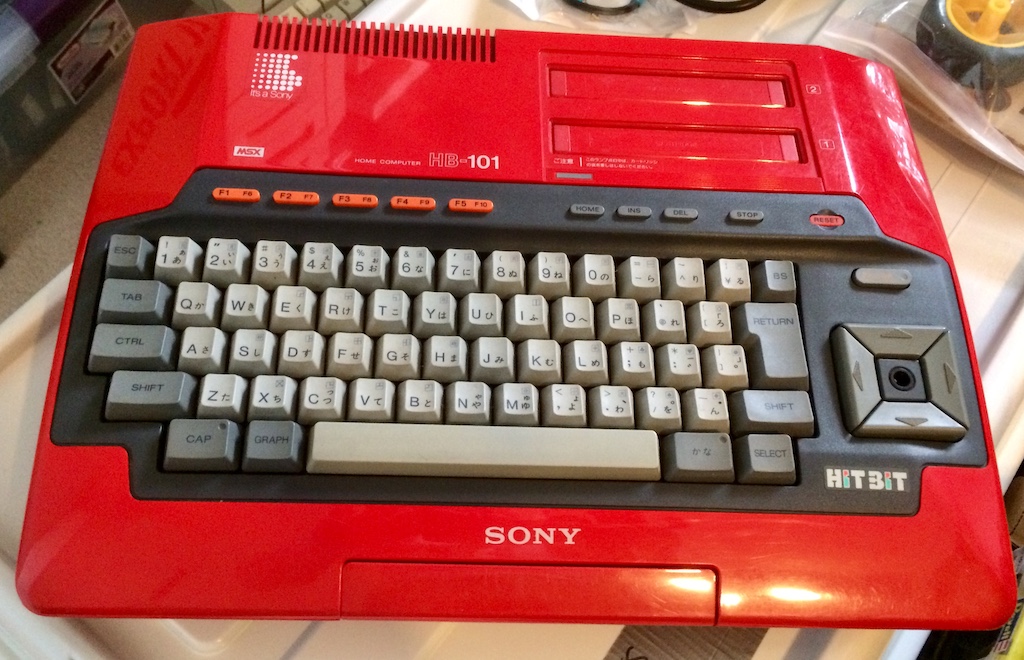 This little guy has only 16kB of RAM and a Sharp-clone Z80A. It has two cartridge slots, which is unusual for North American/European small computers, but is fairly standard for the MSX as peripherals are intended to connect to the CPU bus by way of the cart slot. Some computers even had three slots!

First impressions are not great. The keyboard is a little squishy and needs a lot of direct pressure on the keys to activate them. I’ll probably take the machine apart later and investigate; hopefully it is just dirty or needs some slight adjustment in order to work as well as it can again.

The composite video is, as you can see, also exceptionally smeary on my long-suffering 9L2 PVM. I suspect it might need some capacitors replaced in the video generator. Also on the docket for consideration is an RGB mod, since the video encoder chip should expose those pins.

All HB-101s have a built-in “personal organizer” tool, which seems to be limited to a notepad and Rolodex equivalent. It’s all in Japanese, of course. I tried translating a dump of it earlier, but the ROM has very limited space for more-expressive English text. Since this organizer-ROM can interfere with the address space required by a lot of flash carts, I might end up removing or building a switch to disable the ROM for the organizer.

I had so much fun with my PC-8801mkII that I decided it was time to upgrade to a bigger, better machine. Enter the SR, which officially stands for “Super Revision,” but let’s just pretend it stands for “Sounds Right,” because this baby has YM2203 FM synthesis.

Out of the box, it strikes an imposing figure. 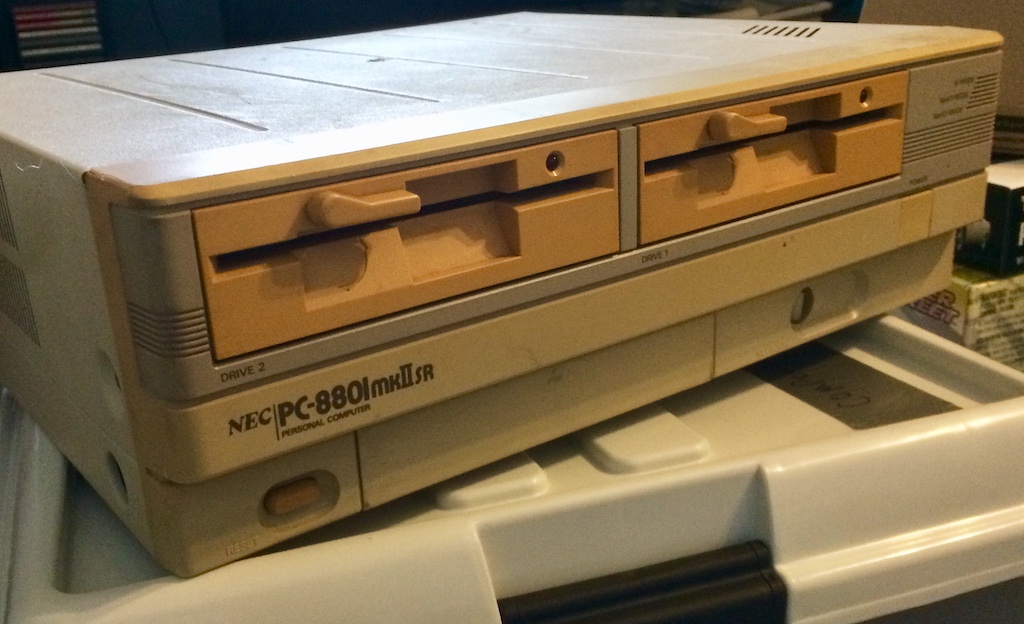 Like my mkII, it has twin 5.25” drives and handsome, if vaguely depressing, industrial styling.

I also managed to find a working SR keyboard, which has all of its keys in great working condition, unlike my previous board. The old, broken, keyboard cost way more than this, maybe because buyers felt better about scrapping a broken one for the switches. Guess there is some honour among Jawas. I still plan to fix up the old keyboard, and get it working 100% again soon.

The case isn’t perfect - as you can tell from the front shot, the plastics are a little cracked, and the top has a bit of paint worn down, probably from whatever junk they had stacked atop this computer when it was in storage.

Around back, we have a bunch of new ports compared to the old mkII ports.

Added ports over the regular mkII include:

It also has the usual ports from the mkII (printer, RS-232 serial, digital RGB video, monochrome video, “CMT” tape cassette). In later machines, they started to abandon some of these “legacy” ports. I think of the mkIISR mostly as a mkII on steroids, even though it is significantly different.

One of the biggest selling features of this new generation of machine is the “V2” graphics mode, which allows for more colours (nobody needed more than 8; such opulence) and a faster-to-update screen mode. Almost every PC88 game made after the SR expects the SR horsepower, and correspondingly the SR was a huge part of the Japanese indie game development scene in the mid-to-late 80s.

I haven’t had much of a chance to play with the machine yet, but it does boot: 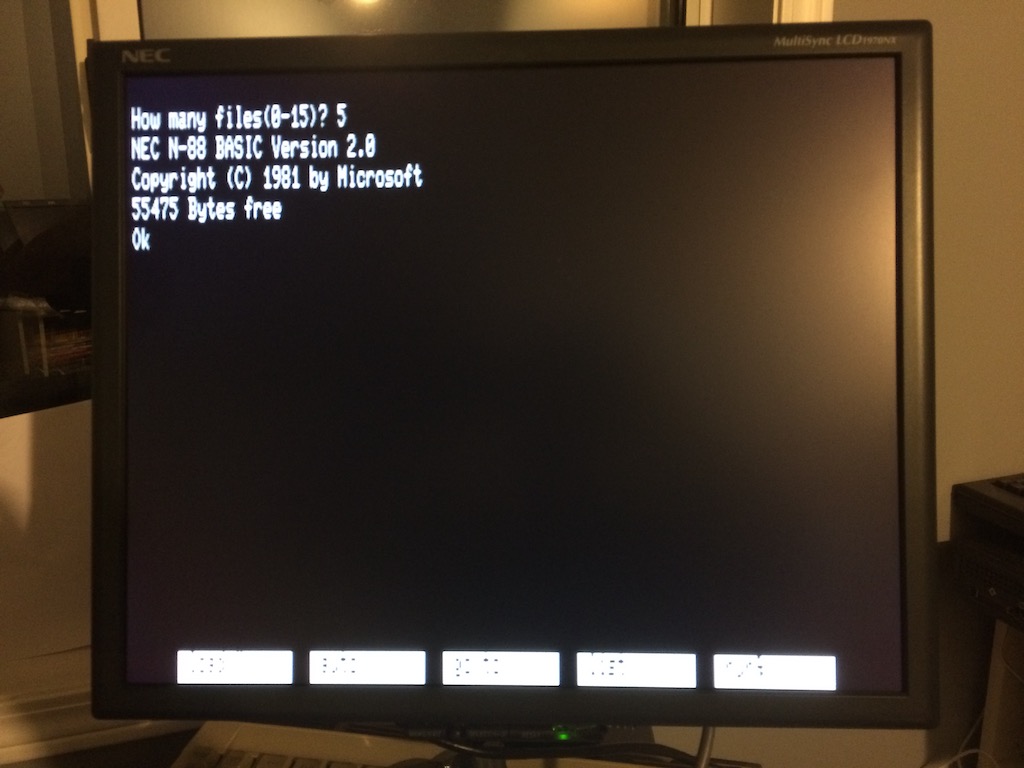 Even though it is using analogue RGB, the picture is much clearer and sharper than it was with my homemade digital-RGB video adapter for the mkII.

My first (and probably only) mod for this machine will be to swap the 5.25” drives out for Goteks, like I did on my mkII. I expect that my homemade floppy adapter for the PC88 will work here too.

So there you have it. Two new projects for my endlessly growing pile of projects. Repairs and mods on these machines will have to wait, as I have a few other computers and consoles waiting in line before them.