It is hard to describe exactly what typing on the HB-101 felt like. “Mushy” is a good start. Sometimes you had to be super-direct and push really hard to get some keys. Touch-typing was pretty much impossible, as my normal key pressure would hit maybe 1 in 10 keys. I was assured this is not normal for the machine, so obviously something was wrong with the keyboard.

My first fear was that the HB-101 has a membrane keyboard, like a lot of the Sony MSX models.

Membrane keyboards are usually made up of multiple layers of conductive material (one layer rows, another layer columns) glued together that are compressed together by the action of the key press. After 30ish years, the layers inside the keyboard don’t want to be together anymore. The glue dries out or they delaminate, and suddenly you have to push really hard to get a connection, if you ever do.

A membrane keyboard is basically unserviceable. You can’t solder to it, and conductive paint can eat the plastic. On the Spectrum and later Sony MSX2 models, there are third-party membranes available, and you just yank out the existing one, throw it in the trash and replace it with a new one. There wasn’t one for the HB-101, which meant if this machine had membrane damage, I would have to grab a better-working HB-101 and gut it just to replace the keyboard in this one. And that would be a shame! All HB-101s have value.

Once you remove five Phillips screws from the exterior of the machine, it pops open. Kind of. There’s a bunch of annoying, very brittle clips to deal with. They were pretty tight, which makes me think nobody else has been inside the computer before. Even so, one of the ones on the left side let go as I was working my spudger gently in to free it. C’est la vie. 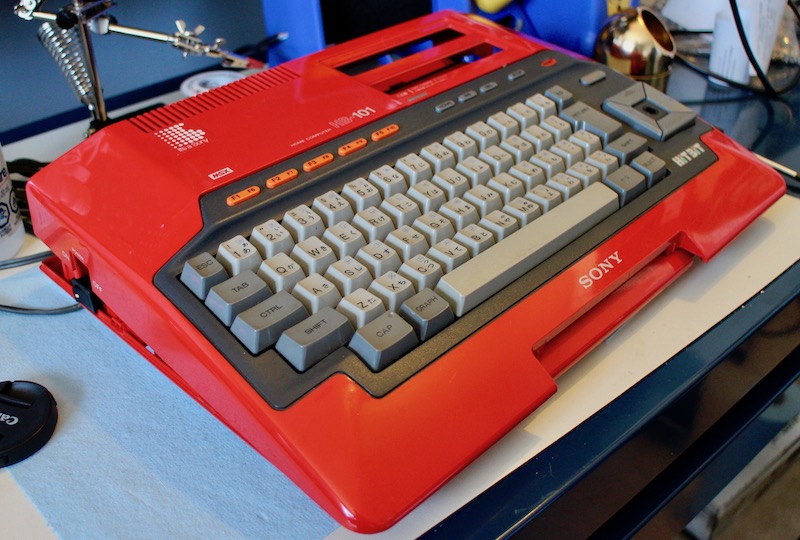 After loosening the keyboard cable, you can see the motherboard and power supply. The cable that’s still attached is a JST SM connector that seems to go to the power LED on the top of the case. 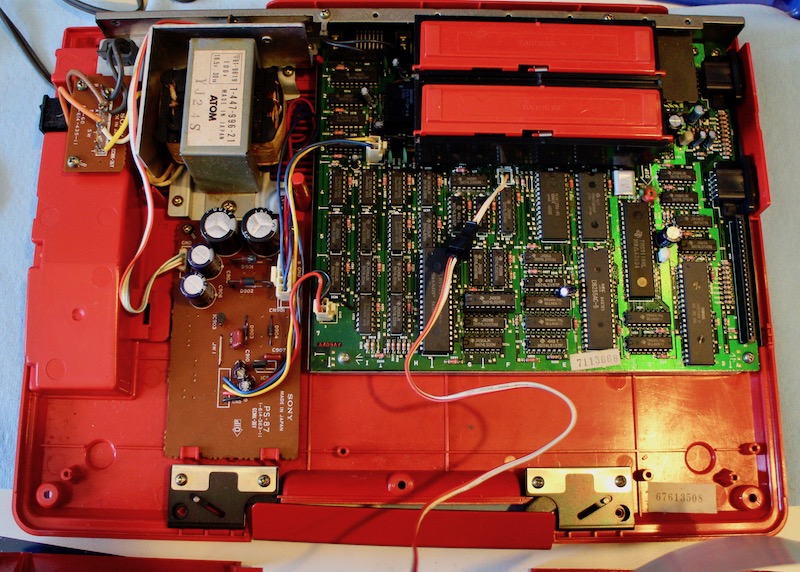 The keyboard is attached to the motherboard through a thin-film ribbon cable (effectively the same technology as a membrane), but the keyboard itself is not a membrane (phew!). However, these cables can still split and cause intermittent signalling, so I took a very close look at it and was super gentle while removing it from the motherboard. 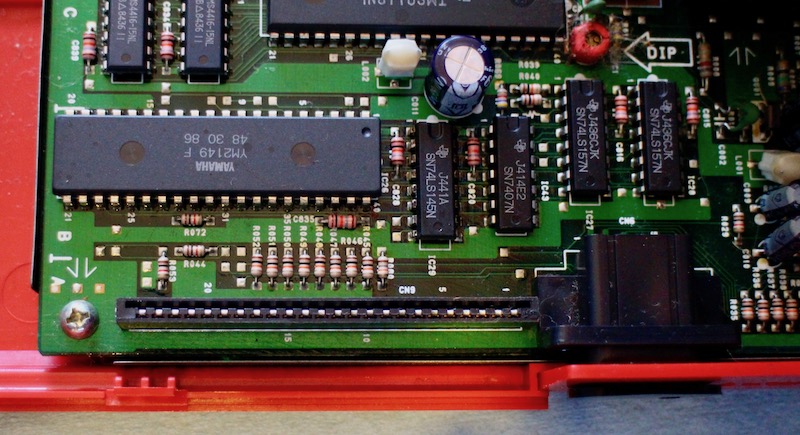 The keyboard connector itself is quite unremarkable. I could probably replace this with a better pin-header-style connector if I really had to. 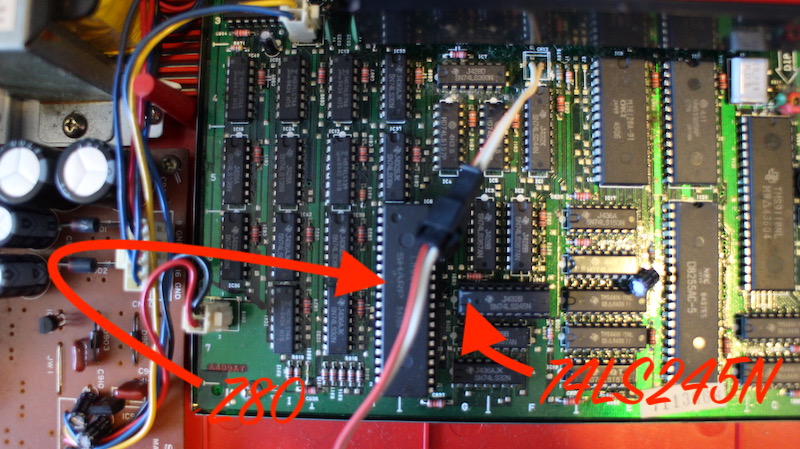 While I was looking over the board, I noticed something weird. Only the Z80 and this 74LS245N are socketed - nothing else. I’m pretty sure nobody else has been inside this machine - why would Sony socket a bus transceiver? Were they expecting to burn a lot of them out? 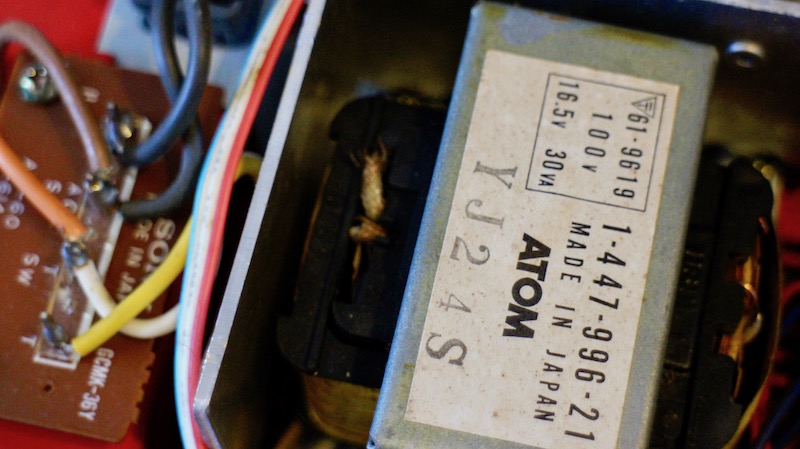 I also noticed this. At first, I thought there was a dead weevil or something in the power transformer. Gross! Then I leaned in a little closer and realized it was just some braided wiring insulation.

Very glad about that - like most of the Japanese PCs I’ve gotten, this one is quite clean inside. 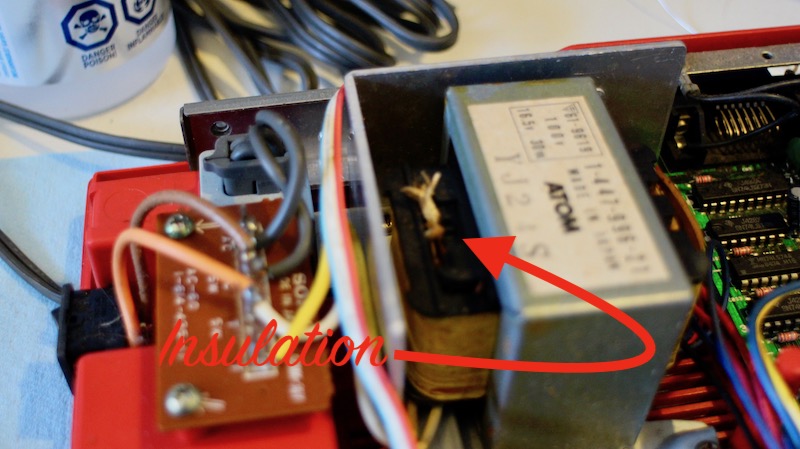 The power switch kept popping out of the case - it’s not positively retained so much as it is pressed into place by the top case. It’s kind of interesting to look at the grey locking connector in the top left that they used to affix the (permanent) power cord. I see a lot of Japanese MSXes that get thrown out with their power cords cut. Don’t be afraid to buy these and save them from the landfill; replacing the cords is not hard! 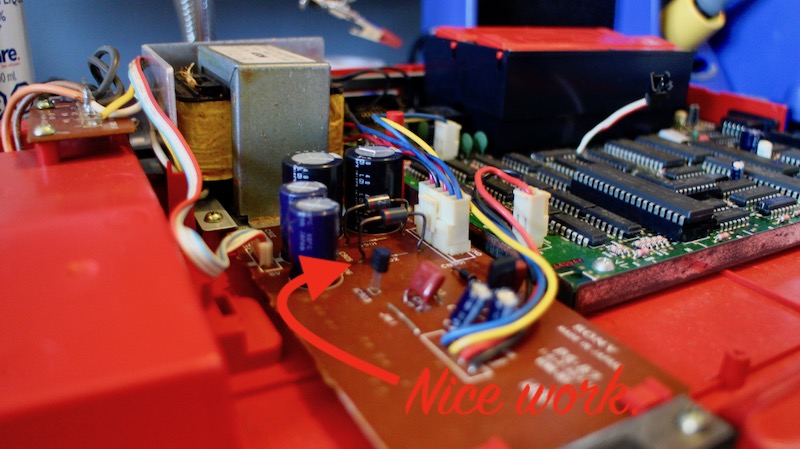 Check out how much space for air cooling there is underneath the diodes that handle part of the power supply. Whoever designed this board and left this much airflow should have told the Trinitron department; those things always have burned up Zeners! 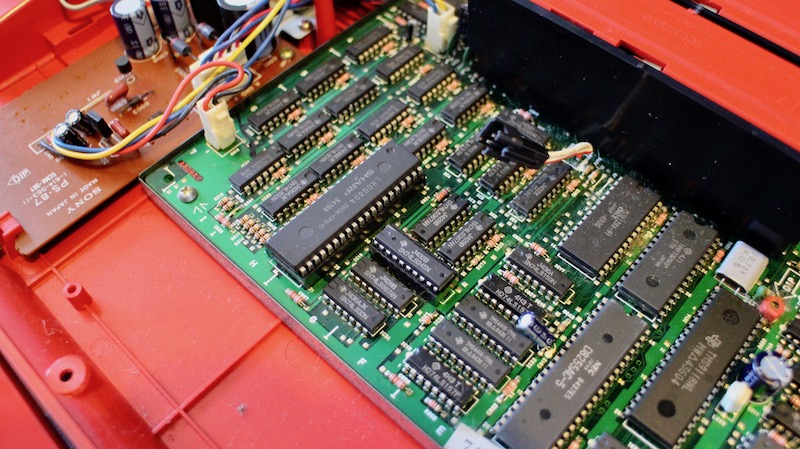 One more view of the motherboard before we move on. The 74 has a really tall socket, which is even weirder than being socketed at all. What is Sony hiding here?

With the removal of six more screws, the keyboard frame is removed from the top case. I set it aside for safekeeping.

On the backside of the keyboard PCB, we can see it’s made by Mitsumi in November 1984. Such a late manufacture date probably makes this one of the last HB-101s with a removable carrying handle - Sony did a later hardware revision that removed the handle entirely.

Anyone who’s worked on a Commodore 64 or an Amiga keyboard knows what’s coming next when you see Mitsumi - lots of screws!!!

This is how many screws you need to remove to get to the keyboard PCB of an HB-101. Now you know, and knowing is half the battle. I was thoroughly weirded out that one of the keyboard PCB screws is just randomly a coarse thread self-tapper.

With the keyboard PCB removed, we can see that the keyboard is both rubber dome and a Commodore/Amiga style rubber “plunger.” I know that all the function keys - those with rubber domes - work great. The problem is with the plungers.

Dimensionally, these strikers look pretty much the same as the ones from an Mitsumi Amiga keyboard. I didn’t try to swap one directly (I had enough loose screws on my workbench at this point), but I would not be surprised if this is a viable parts source for both machines.

In much the same way as I have with my Amiga keyboards, I scrubbed all the contacts with isopropyl alcohol (going through eight Q-tips) and scrubbed each rubber striker with a piece of clean printer paper to get rid of any non-conductive stuff on the conductive carbon.

Looking at the board, I noticed that some of the solder joints looked dull, so I touched every joint up as well. Not sure that made a difference, but I really didn’t want to tear this whole computer back down again if I screwed it up.

The joints were very strange - it wasn’t that the solder didn’t want to flow, but it was like I had to use a little bit of force to push through a “barrier” on top of the solder in order to reach it. It was sort of like when gravy gets left out too long and gets that film on top. Maybe it’s corrosion or something?

I put the computer back together (with some struggling from the plastics, which expanded during their first freedom in 35 years) and then went to test.

My trusty Commodore 1701 is now getting to the point where it needs a real service, because it failed to lock onto the signal past the initial boot screen, preferring instead to “roll” and produce a black and white image of total garbage. That’s a future project!

I turned to my 9” Sony PVM-9L2, probably the only PVM in existence without RGB, for the rest of the test. The video quality still wasn’t very good. 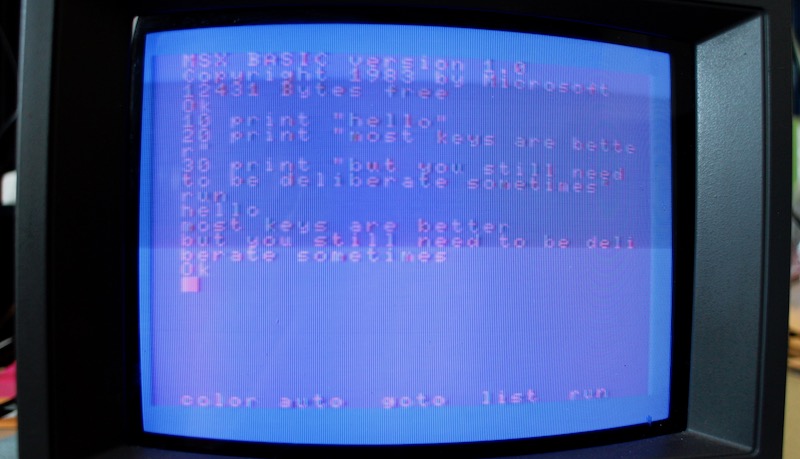 In fact, this MSX’s video never looks good except on my Samsung 910MP shop LCD, which makes every other thing I plug into it look fuzzy and dull. I guess they were born to be together. 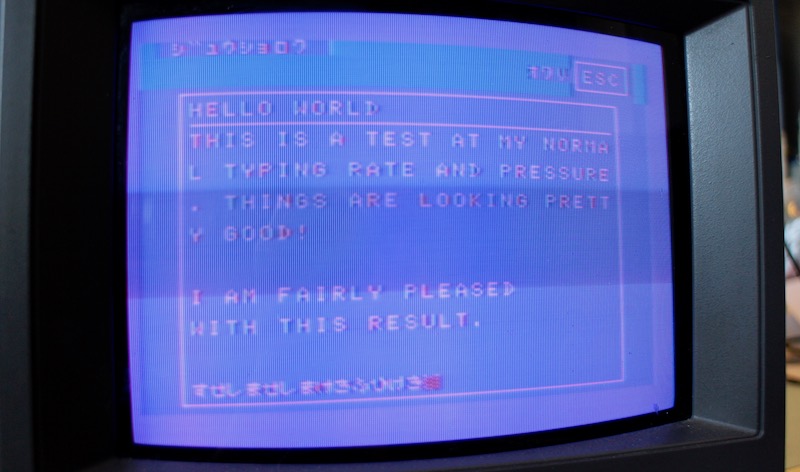 When I first typed, some keys were a little touchy, but with a few lines more exercise, they got better - or I got better at typing with this keyboard. The feel is still awful, but all the keys are working great now. And I didn’t even break any of the little LEDs beneath the toggle keys! A big success.

What’s next for the HB-101? I’ll be trying to find a way to make it useful, possibly by emulating a tape on a bigger, more Internet-connected PC.