This little prize has sat on the shelf for that whole time, waiting for me to figure out how to repair electronics. Until now, I’d never even taken it apart to see if I could fix it.

It was easy to fix the d-pad. All it took was a little isopropyl alcohol and a Gamebit screwdriver and some organic-looking goo was cleaned off the pads. No problem now!

I reckoned the power jack would be just as easy to solve - probably just a cold solder joint, like on the Genesis II the machine is based on. I have lots of spare Genesis II power jacks. Piece of cake. 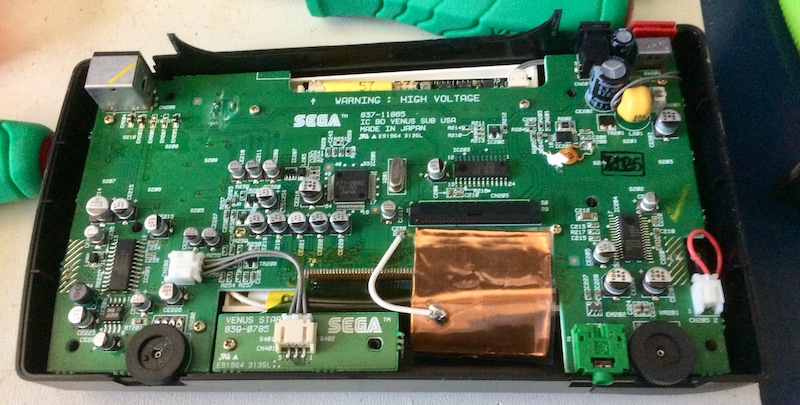 Once I desoldered the front two pins of the DC jack, I realized something. I could wiggle the entire jack and the severely blackened rear pin (+9V) would move… without having first been desoldered. More than just a cold solder joint, the entire pad and rivet had torn itself right out of the board! Some more creative desoldering for access and then judicious use of a side cutter eventually freed the rear #1 pin, but now I was in a lot of trouble. 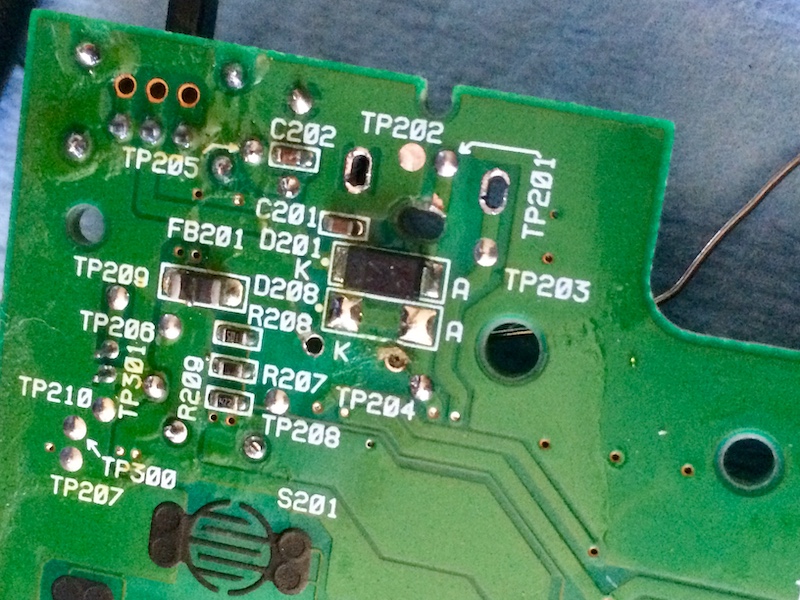 Once the jack came out, I noticed that the plastic was cracked. The whole jack fell apart in my hands, with both the switch and ground pins falling out without any effort. Who hurt you so bad, little Nomad?

I did what I could to save it, which pretty much meant running bodge wires. Still not sure how to mechanically support the jack so that the solder joints don’t immediately break again with rough treatment, as I don’t think hot glue will last very long either.

I patch-wired the new jack’s 9V pin to the test point for it, but I still had no continuity to anything else on the board… and it wouldn’t power on with the AC adapter inserted!

Angry, I patched it to the positive point of the backlight power cable, only to realize (when I plugged it in) that it both bypassed the power switch and the 5V regulator. I was giving the motherboard a hot 9V supper, and it’s only a miracle I didn’t fry it with my idiocy.

Don’t keep going when you’re angry or frustrated; instead, take a break and think about it. If I had, I would have noticed that the trace from the number-one pin also goes to this diode (D201), but it was hard to see in the shadow: 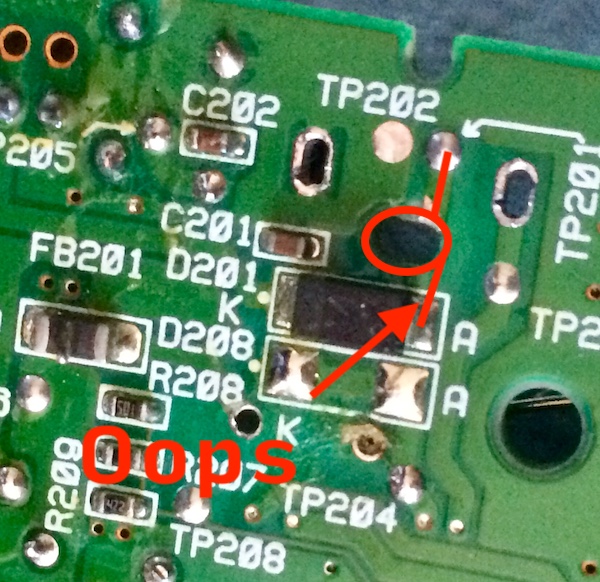 I didn’t figure this out myself, of course, but several minutes later when I was poring over these great homemade schematics by Sega-16 hero TmEE.

I immediately moved my patch wire to the anode of this diode and then apologized profusely to the motherboard. Sorry everybody! Hope you’re not too mad. 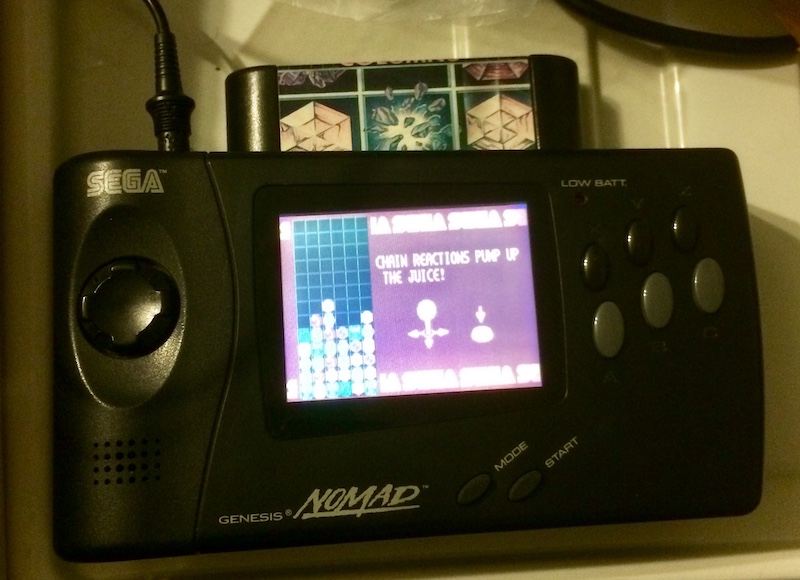 After patching the prong of the connector to the diode’s anode, I was able to run the Nomad off the MK-2103 AC adapter with impunity. I wiggled the cord a bunch (but not too much; don’t want to really push that spotty rear joint until I have a way to affix it better to the board) and I was able to lose Columns twice without it shutting off.

Now, an AC adapter is one thing, but the flaw that really made me put this baby on the shelf for so long is that it doesn’t work worth a hoot on batteries. How bad, you ask? Four hours? One hour? Try like thirty seconds.

A set of 6 AAs doesn’t seem to last very long at all. The Nomad flicks on its “low battery” light almost immediately, and then conks out, even though the pack meters out in the high 8-volt range.

Anything in the 8-volt range should be fine, since the voltage regulator is rated at a 1.2V dropout… so it needs at least 6.2V. What’s going on?

I noticed at this point that if I sat down sharply or jiggled the “backpack” that held the batteries to the back of the Nomad, it would shut off. I pulled off the AA battery “backpack” and re-tensioned the thin prongs that touch the Nomad, and after that, jiggling didn’t shut it down. It did, however, still light up “low battery” and shut off, sometimes as quickly as 10 seconds after startup, often longer.

I tore apart the Nomad again to take a look at the other side of the prongs; I had been told that these sometimes had cold solder joints and needed a refresh. While the solder I saw wasn’t fresh by any means, nor was it cracking. I wiggled these prongs pretty hard and wasn’t able to break continuity on my multimeter. 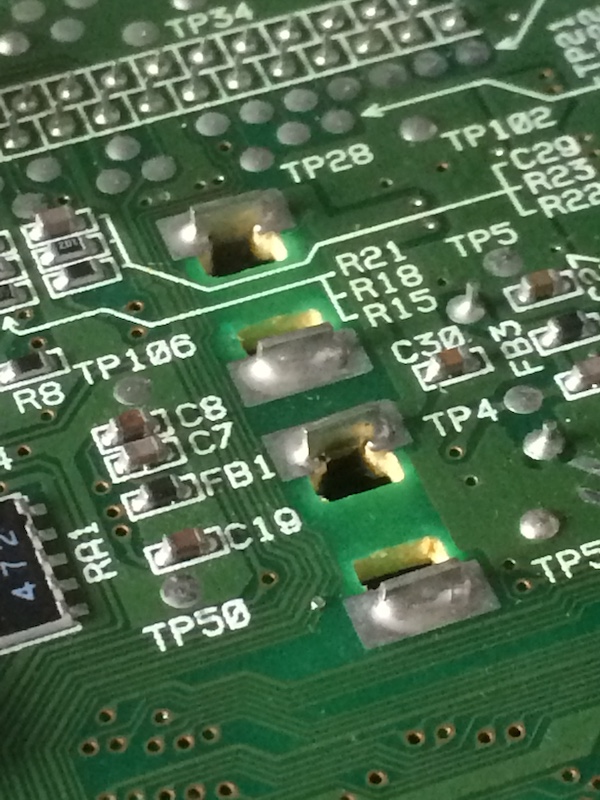 While I was in there, I was delighted to see how observable the motherboard was. This is really just a Genesis, but made smaller. No surprise whatsoever, as it’s rumoured that the Nomad development came directly from that of the “Mega Jet” line of semi-portable Genesises that Sega released in Japan.

My theory at this point was that there must be one of two problems:

There is, of course, a third option:

First step: try new batteries. These dollar-store cheapos are probably not the best when it comes to a high-current backlight, loud speaker, and thirsty Genesis logic board. And they’ve been sitting for years on the shelf, having “expired” in 2012.

I dropped in some fresh dollar-store cheapos (whose package warns you strongly against using them in “high-current applications” like video game systems; okay, grandpa), and started playing video games with a stopwatch next to me until I got bored.

This suddenly solved a lot of problems! I played Columns until I lost twice (takes less time than you’d expect) and then parked the machine on the relatively intense intro credits/attract screen sequence for Ranger X with the brightness and volume cranked.

After about thirty minutes, the “low battery” light came on solid again, but the machine kept working. After another thirty minutes, the Nomad shut itself off. I was able to turn it back on and run for about another minute, and then it shut off again.

I checked the battery pack immediately, and it now reported 7.82V/9.0V, which is still quite far above the voltage regulator’s specified dropout of 6.2V, but perhaps there is a significant voltage drop.

I’d estimate the total battery life at about an hour. That’s still well short of the official Sega estimates (of “two to three hours”), but it’s a lot better than it was before. No doubt some of the weakness was due to the cheap carbon-zinc dollar-store AAs I was using.

I’m not sure how much current a ‘good’ AA is supposed to be able to draw, but I’m guessing the old ones were sort of like when a car battery goes bad. There’s enough juice to run the car with a jump, but when you try to put some load on them they just fall over.

So why am I suddenly getting “okay” battery life where I thought the machine was totally damaged before? My best guess is that the problem lay in the broken plastic of the DC jack.

You see, this variety of DC jack - and I assume most DC jacks have this - have a sort of “sense” pin to detect whether or not a plug is actually inserted. In the Nomad’s case, they use the number-three pin to switch between battery (plug not inserted) and wall power (plug is inserted), because it would be bad to mix those two power sources in the same machine. 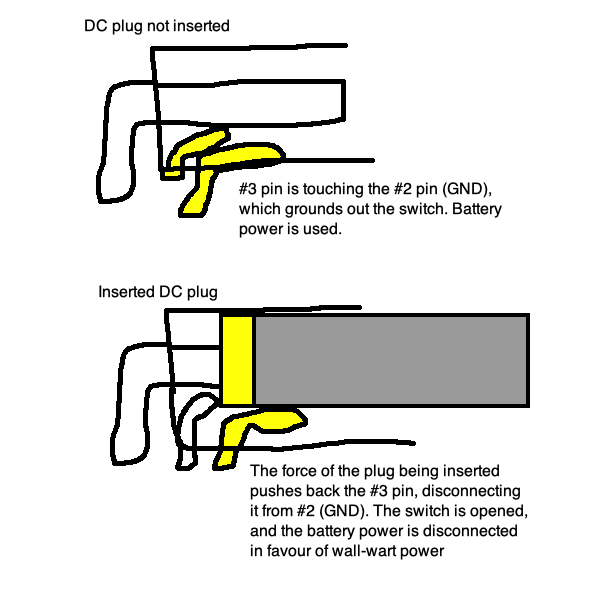 In the case of this power jack, the cracked plastic surrounding the barrel was so badly damaged that when I removed it, the leaf representing the number-three pin fell out completely. With that switch being loose, my theory is that the Nomad was occasionally switching over to DC power without DC power actually being there. It would then immediately die, because it effectively yanked its own batteries out.

Where will this Nomad go next?

I am suspicious of the fluorescent backlight - and I think in a future experiment I will try disconnecting it and then seeing how much more battery life I get out of the machine before it dies. It would also be nice to take current measurements with my bench power supply in both backlit and non-backlit modes (the rated power is 3.5W, which would mean that anything over 380mA of draw is too high).

The screen is not really usable like that, but I do know they are notorious power suckers on the Game Gear, and the more the better.

I also think it would be a nice idea - for the sake of the environment if nothing else - to have a rechargeable battery pack in this machine. I picked up the optional NiCad pack for the system, but it both weighs a ton and needs a re-celling.

There are lots of lithium-ion conversions out there, and I do have an Adafruit battery management board that has all of the nice circuitry to charge off of micro USB.

There are also lots of composite-TV conversions that get rid of the terrible original LCD, and those almost certainly reduce the battery drain as well, while making the Nomad less painful to look at.

The speaker is also a little hissy if you listen to it in a completely quiet room. It’s possible that one of the amplifier caps has crept up in resistance.

I would also like to figure out some way to more rigidly affix the power jack, especially considering the very weak solder pad it had before is gone. I could always use some kind of epoxy, but that is fairly permanent. It may just end up being reinforced with thick tape of some kind…

For now, though, I’m happy that the machine is fixed. I had felt guilty every time I saw it on the shelf, and now it at least can get through a few matches of Columns - for $2 in batteries an hour.