The first big problem is that the seller reports a RAM error. I figured that it was either a loose RAM chip, dirty socket (very common on the Tandy: the fan draws dust and grime directly over the RAM area), or something gone wrong with one of the address-decoding 74s. 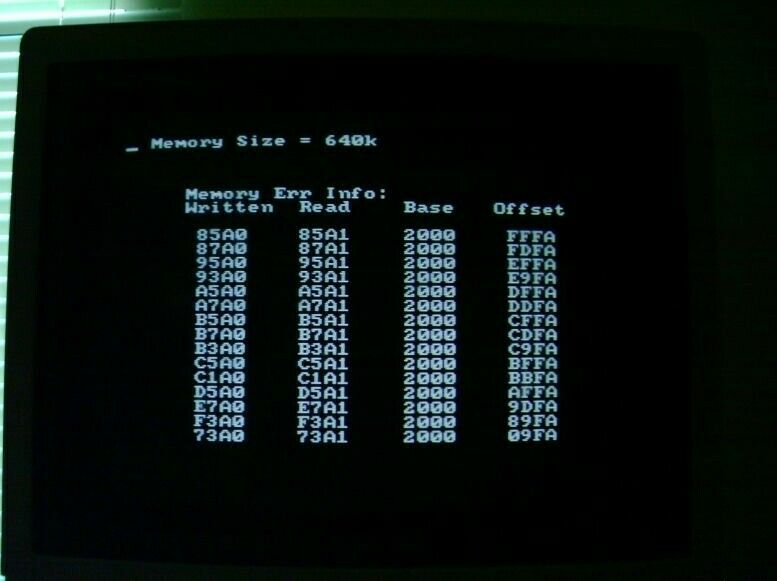 The seller was good enough to include a picture of the diagnostic error. Look at how nice and informative this error is! It looks like we’ve got ourselves a stuck-high low bit.

If only every computer was so explicit about what’s going wrong inside of it. Kudos to the anonymous Tandy engineer who banged this stuff into the ROM.

Actually Firing It Up

I connected it to composite since I don’t have a working RGBI/CGA monitor setup yet, flipped the switch, and was rewarded with what looked like a grid of ghostly white lines. This grid flickered a bit, and then I got a black screen.

A subsequent “turn it off and turn it back on again” did nothing to change either problem, and I’m fairly sure it never actually reached a sync that was tolerable for my PVM (the OSD never displayed “NTSC”). Usually I know better than to just plug it in and let it rip, but I guess I was buoyed by the seller’s pictures of it happily running in its old home.

I wrestled the case off. While I was in there, I also reseated U13, which was a RAM chip in the “bank 1” (aftermarket) section that had popped halfway out, and then went around doing my usual “put thumb on every socketed chip” repair technique. 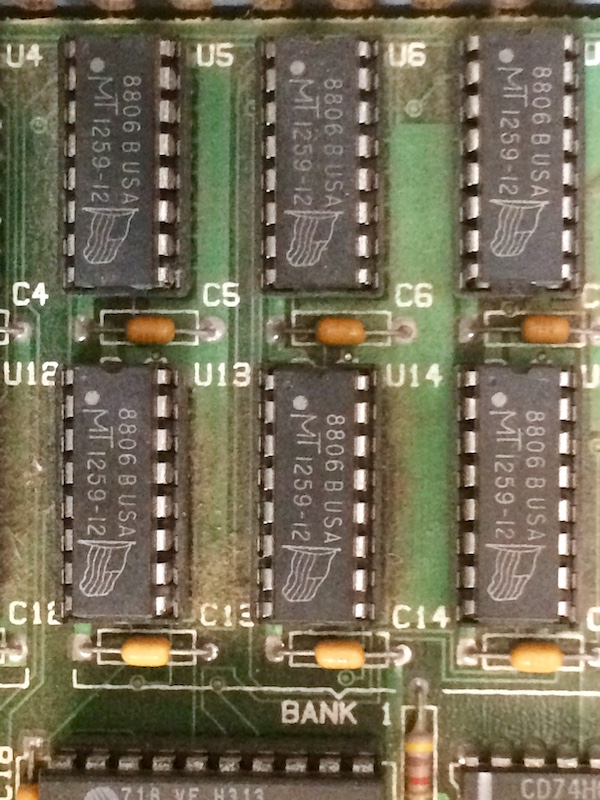 I was disappointed not to see a fried tantalum capacitor with a plume of campfire smoke coming out of it - be careful what you wish for. Not much else seemed obviously wrong, except for a dead bug or two inside the case. The power supply seemed clogged with gross dust, which could explain where the bad smell came from.

After cleaning around the machine and tweaking the volume pot to see if I could hear a beep, I bravely reinserted the power cord, flipped the switch, and got a scanline on the TV (but no sync). I leaned in to look closer at the TV, and this time my reward was a nice, loud cap-bomb explosion and dust cloud from somewhere under the power supply.

Off come the rest of the plastics

Did I mention that this computer is gross? Everything is covered in a thick layer of dust, especially the power supply. 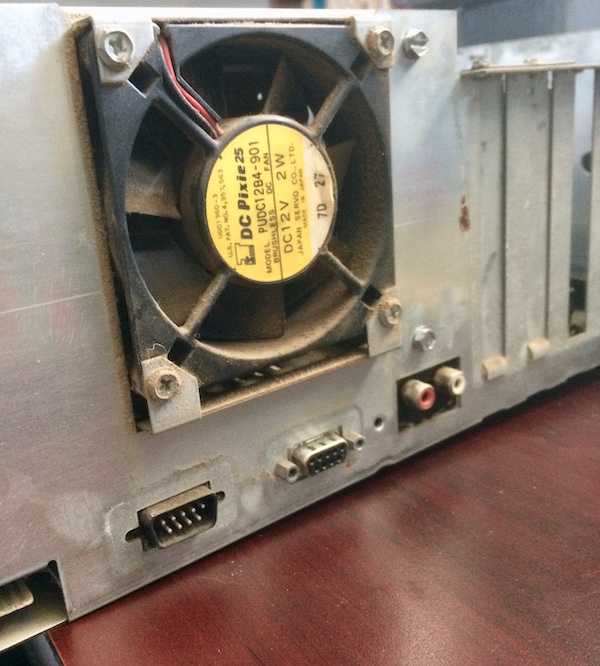 Happy to see that, unlike the PC8801mkII’s AC fan, the super-loud power supply fan here is a common DC fan that I can just swap out. The bearings don’t sound noisy, but maybe there are still some LED case fans left over from the early 2000s in this fitment. 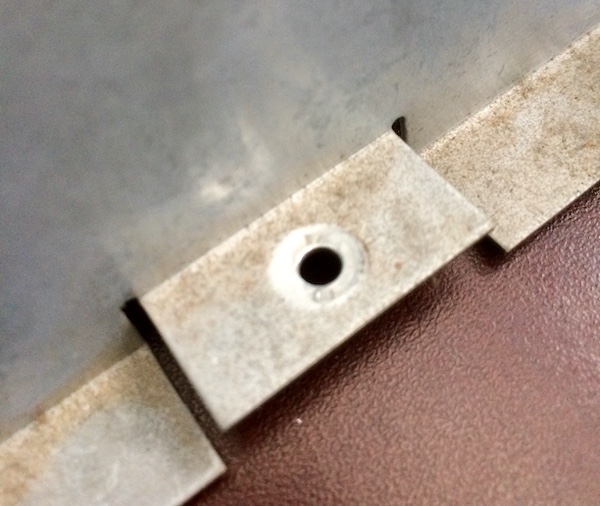 When I removed the floppy drive shield, it became pretty obvious that it had not been removed anytime recently. The screw’s threads were choked tight with grimy dust, and you can see the original metal underneath its head. Everything here is getting a date with the bathtub.

The power supply connector was a little more generous than the one on my Amiga 2500; it only hurt my thumbs and spudgers for about five minutes before it gave up the goods.

Now with the power supply out, we can see if there is any damage under the power supply where I saw the dust cloud come from. Not only is there no visible damage, but there’s no tantalum cap that could have been responsible for the bang I heard.

Maybe it was something inside the power supply that let go? 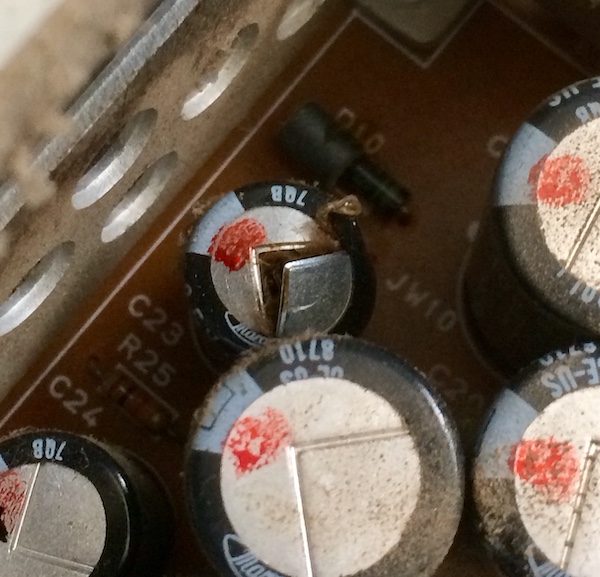 Well, that’s definitely a dramatic failure. At first I didn’t want to believe it was this cap that let go, because it looked old. Aren’t electrolytics supposed to be all juicy and organic inside?

Then I found new chunks of capacitor winding on the motherboard from where the vents of the power supply could have deposited them. Those definitely weren’t there before.

This cap (C23) seems to be on the -12V rail, as shown by the Sam’s service manual schematic: 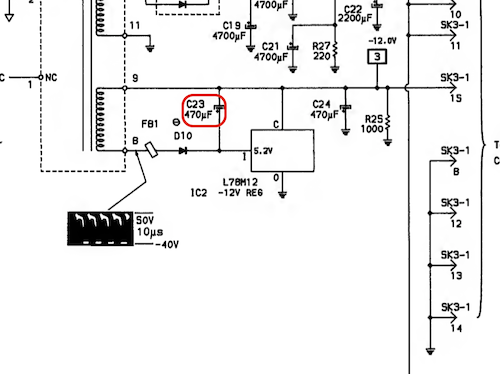 So now I have an exciting new power supply project ahead of me. I haven’t decided if I will rebuild this supply (there’s one really big, scary cap with a “HIGH VOLTAGE” sticker blocking its vent) or go and grab something like a Pico-PSU to modernize the machine a bit.

Hopefully nothing is damaged on this Tandy as a result of my impatience, but I have my suspicions that having a wacky failing power supply might just be related to sensitive 1980s RAM chips being upset. For now, though, we honour a fallen soldier. Rest in peace, C23.

And somehow the line filter X2 film capacitor is still fine! At least I’m pretty sure that’s what that little black bastard is.

Uhhhhh… don’t turn on computers before you’ve given them a really good looking-over. And also don’t keep turning them back on once you know something is already broken.

Maybe also invest in a Variac, so you can spend all afternoon slowly reforming the 32-year-old electrolytics so they explode in a more gentle, cute way.