This is all sort of an awkward lead-in to brag that I’ve picked up two more Tandys - a 1000EX and now this 1000TX - and wasn’t really meaning to get either. However, it’s a good thing, considering the 1000SX seems to have a voracious appetite for custom chips and an intense desire to make me sad.

This 1000TX was posted late at night on our local classifieds, with some photos of the backside. I made an offer, and met with the seller to get the machine. It seems as though it came from an estate sale or other similar storage-purging, and the previous owner was some sort of engineer.

The floppy drive is obviously mounted in a very weird way. I have no idea what’s going on here. I think this is the original drive, but it’s awkwardly installed in between the two 5.25” bays of the front of the machine. 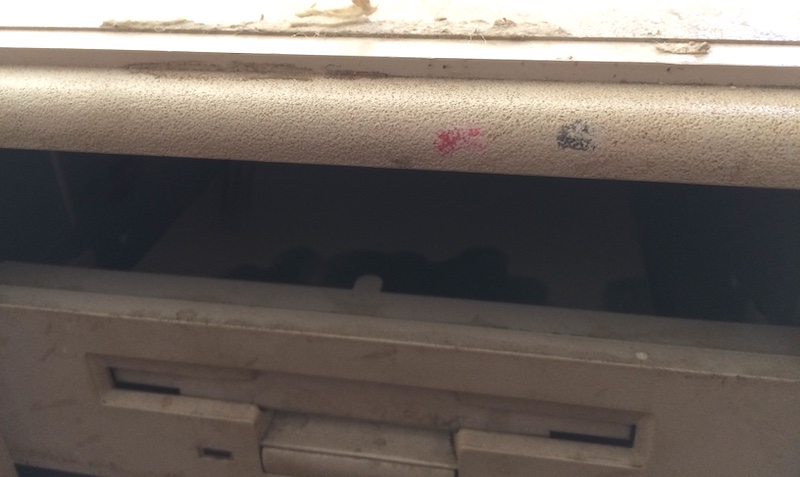 One consistent theme that seems to be happening with Tandys is that they’re all dirty when they get here. Someone else is probably better qualified to speak to the socioeconomic reasons why; personally, I think they just got stored in a garage for twenty-five years. I took a bunch of Lysol wipes to the case, and got it knocked down, though a lot of the textured plastic still holds onto grit and needs a deep clean.

Here, I did a quick before and after of the power switch area. This was about ten seconds of work: 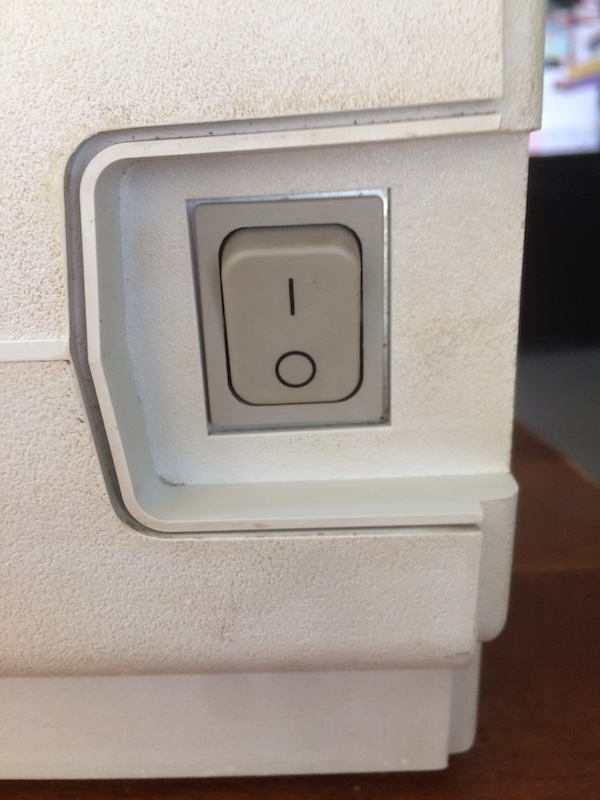 Not museum quality, but it’s always surprising to me how big a difference this makes. Something about the texture on these plastic cases seem to trap more gunk than the more traditional metal cases on other computers of the era. 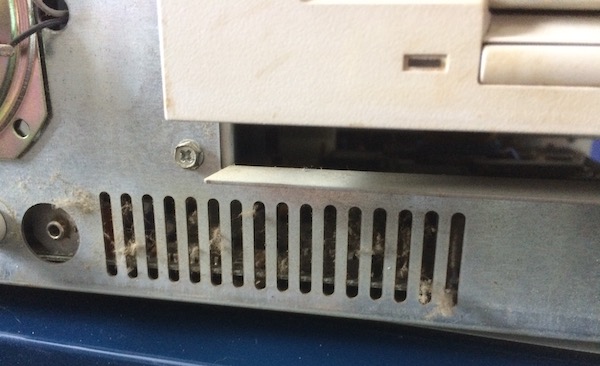 Once the grimy plastics come off, the inside of the machine is still grimy. Here’s a little surprise, a Seagate hard card with a huge 40MB ST351A/X attached. The “A/X” part of the model number means it can run in either 8- or 16-bit mode. 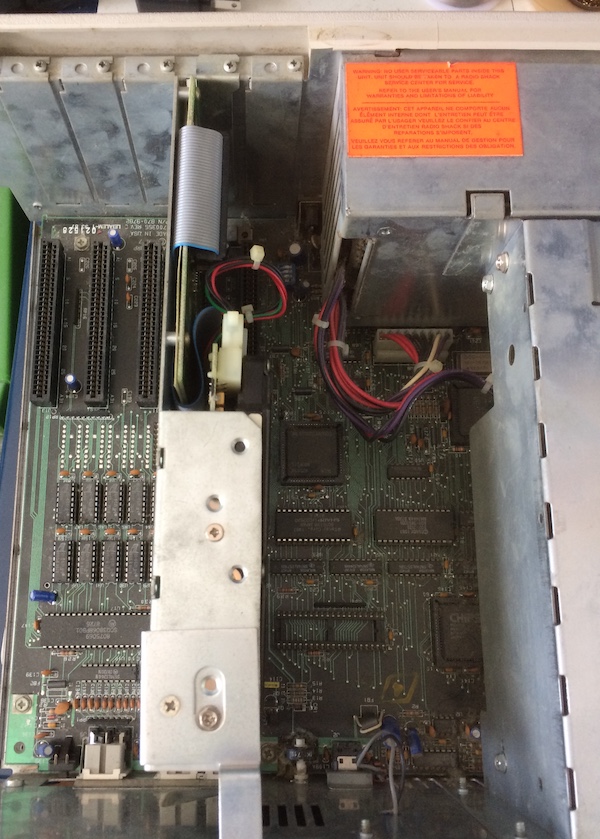 I was a little disappointed to find out that the floppy drive is one of those proprietary Tandy jobs that carries both power and data on the ribbon cable, delivering a hearty 12V zap to the ground pins of any non-Tandy floppy drive who dares. If I want to use a Gotek or a normal floppy, I’ll have to put together a little adapter, sort of like I did on the PC98.

Out comes the power supply: 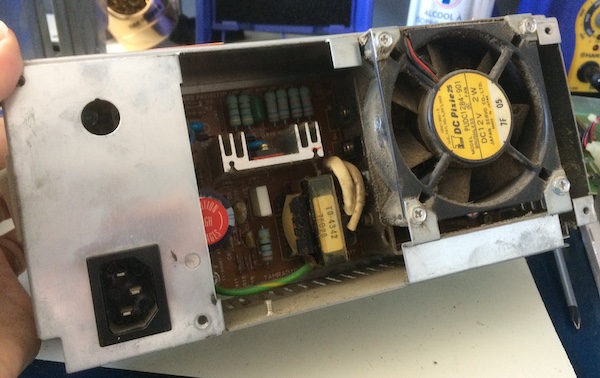 With the power supply out of the machine, we can see how gross the motherboard is. 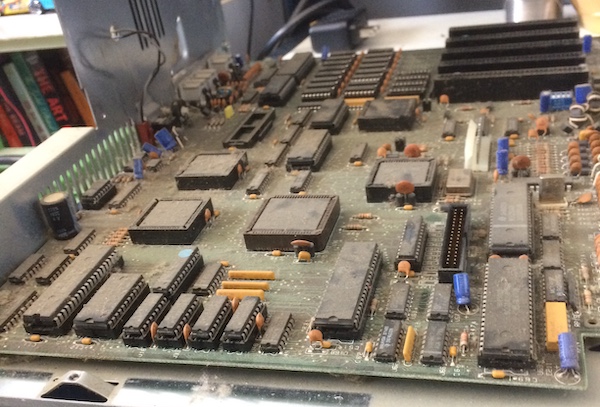 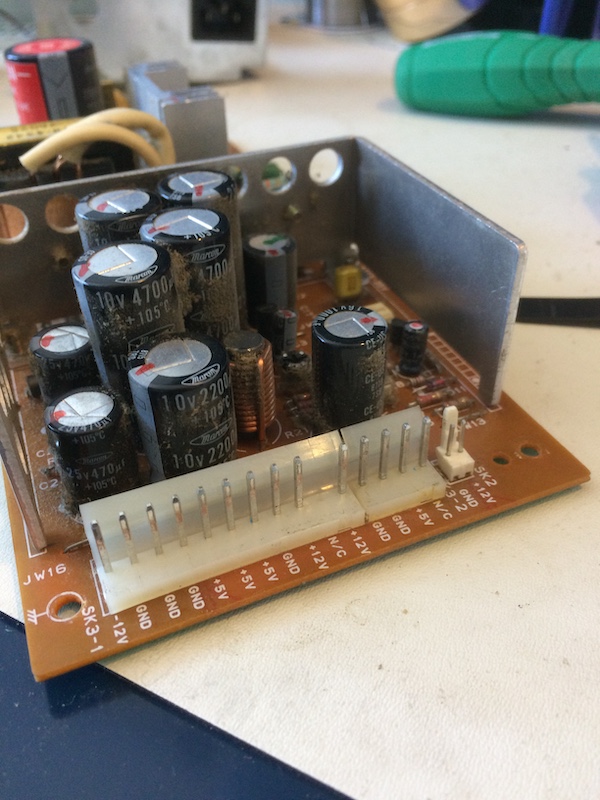 Just like on the SX, the power supply Molex plug fought me until it came off. I probably spent longer on removing that connector than I did on any other part of this test.

As with the 1000EX, we want to make sure that the power supply is good. After all, I don’t want to chase down more Big or Light Blue chips. The technical service manual for the 1000TX is also available, and has the following load table, exactly identical to the 1000SX: 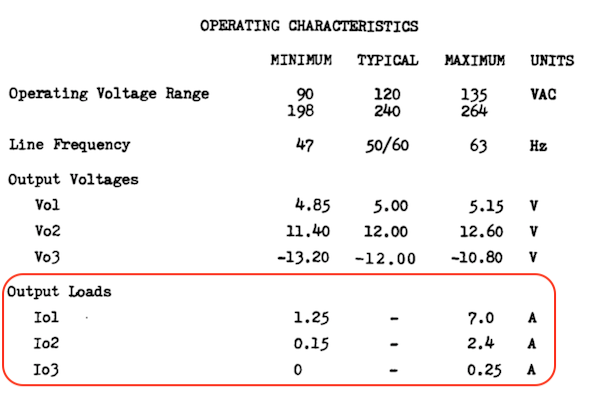 The usual Tandy testing arrangement was implemented, as with the 1000SX and the 1000EX: 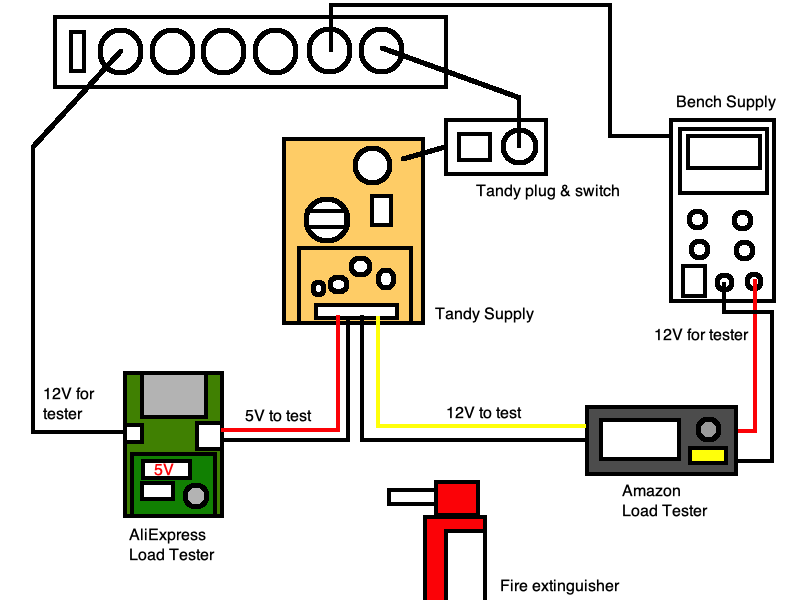 The results were a bit surprising. That 12V is a little high:

Still, though, the power supply should be fine. Especially when you consider the extra load of that Seagate trying to spin up on the twelve-volt rail.

After waiting a few days for the big mains capacitor to settle down, I put the computer back together again. This time I made sure to slip the floppy drive fully in the bottom bay, to make room for an eventual future Gotek or similar.

I had some problems putting the big leftmost RF shield back on, and so put that shield aside for now. Whether it was a slight misalignment or whether the thing had rested for so long that the metal relaxed a bit, I kept ending up with a weird hump in the RF shield that kept the plastic from settling over it. The previous owner had made some dents in it to make room for the hard card, which has a thick metal clamp for aligning itself to the case. These dents were just in the wrong place, I guess.

Once connected to my test PVM through composite, I fired it up. I got the normal 640K of RAM test, a happy startup beep, and - this is surprising even to me - the hard drive immediately jumping to life and working without any horrible noises. Awesome! 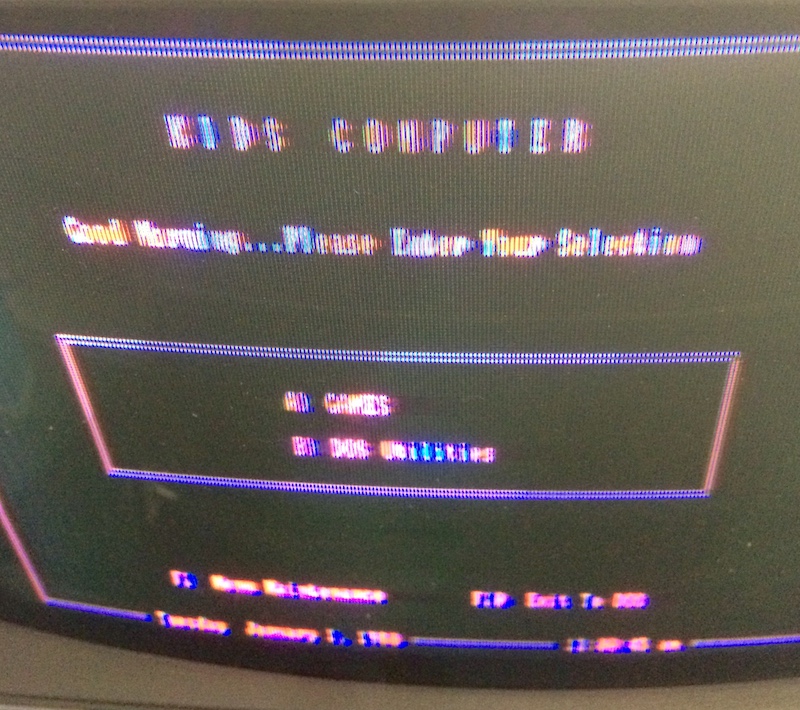 It looks like the previous owner had set this machine up for their kids (grandkids?) to play on. As such, it has this little menu letting you choose between games and DOS utilities. I don’t think there is a Tandy clock peripheral in this computer (at least I didn’t see a battery), so it will always be “good morning” when I power this thing on.

Another working Tandy 1000 has joined the stable! If only I had a keyboard adapter. None seem to exist (much to the community’s chagrin), so I’ll have to build my own.