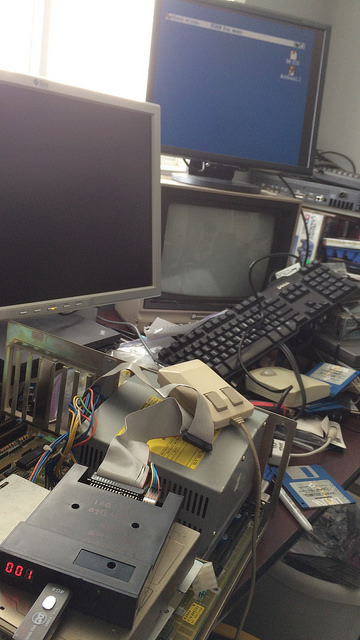 I used the USB-USB programmer technique, which only required me to solder on a header, but I did run into some problems:

I used a double-headed USB cable, as described in this video:

I also had an STLink programmer, but the perversity of using a double-headed USB cable for something other than evil deeds struck me as necessary entertainment.

Change the drive-select jumper from S1 to S0

The Gotek has two pins on the back which seem to control which drive it presents itself as. Mine shipped with the jumper set to S1, which makes the Amiga think it is DF1. Since I have an A2000, it refused to boot anything off of DF1, which made my initially think the drive (or my USB pen drive) was broken.

Adjusting the jumper to S0 made the Amiga convinced the drive was DF0, and I was now able to boot off the Gotek into the excellent HxC file selector software.

The Gotek assumes that it is going to go into an IBM PC, and on dual-floppy IBM PCs, both drives are jumpered to “secondary” from the factory and they never change. This is why there is a little twist in the floppy ribbon cable on IBM PCs: it inverts the signal from the “topmost” floppy drive so that it becomes the “A” drive and the other the “B” drive. Without the twist in the cable, both drives will identify themselves as “B” or, in the case of an Amiga, “DF1.”

If whatever computer you are putting this into does not have a twist in the ribbon cable, you may have to do this as well.

I want to do the sound mod and the OLED mod, but the eBay shipper seems to have lost the OLED parts in shipping. Will update once those are done, as the fun of the sound mod to me is figuring out how to add a DuPont connector to some loose wires, which I’ve never done before.