I’m a little late to the whole PlayStation ownership game, but what better way to start than by attempting a modchip install? This one had some twists and turns, but ultimately ends up with me being able to play A-Train in blurry composite video.

Before I imported any Japanese computers, I decided to test the waters of Yahoo! Auctions Japan with something I wouldn’t necessarily miss or need exotic parts for. Because they were cheap, I bought a big lot of Super Famicoms, which you’ve already seen – and a small lot of PS1s and one PS2.

I had always intended to modify the PS1s, and got even more excited when I heard about the PsNee project, which is an open-source PS1 modchip built using the Arduino toolkit and hardware. Make sure to visit that link, because it explains the actual mechanism by which modchips “lie” to the PS1’s security system to convince it that they are in fact reading a retail disc.

I programmed the then-latest release of PsNee onto a Digispark clone board. Digispark boards are/were an Arduino-compatible platform that is based around the ATtiny85 microcontroller, and are fantastic pieces of hardware1.

Of course, they were eventually turned into a very cheap Chinese clone. I used to use them all the time for adding a bit of smarts to small jobs, but gradually moved onto Nano and Pro Mini clones when they became just as cheap, easier to get, and easier to work with.

Once I had the programmed microcontroller in hand, it’s time to solder it into the motherboard of the PlayStation, so that it can speak its lies into the correct ears. I’m embarrassed to say how long it took me to figure out that all the solder-point reference pictures were showing the back of the mainboard. 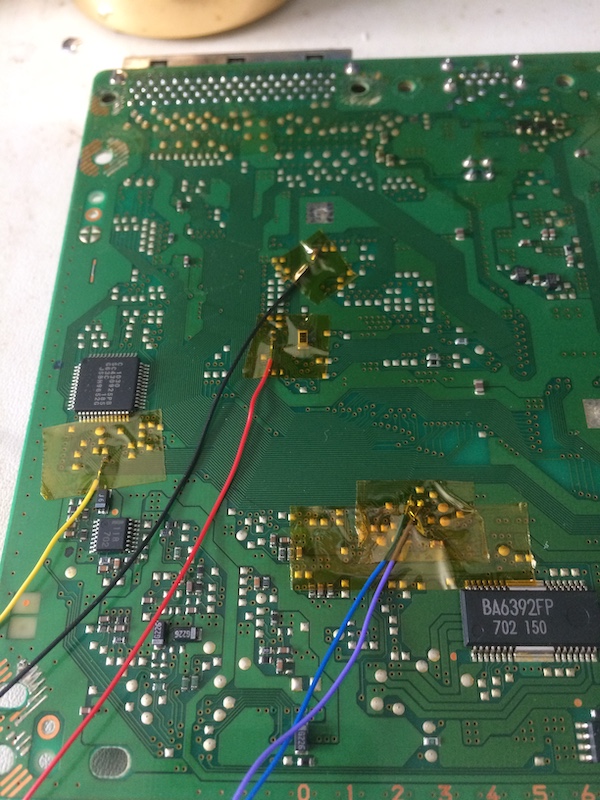 I wired it up and then dragged the wiring out the front. I made sure to leave a lot of room so I could clip the wires off just at the right length. 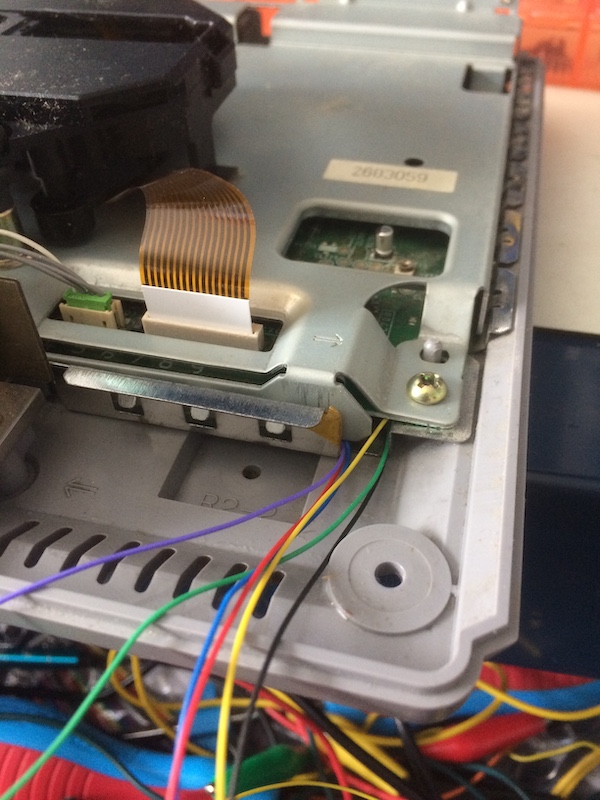 This wiring technique really cleaned up the whole install, except I had to go back and desolder these wires a few times. The melted insulation and clumsy re-strippings were testaments to the fact that I still should have left more slack to work with. It would also have been nice to have a different pinout on the chip that would allow for a straighter wire routing. Still, I was fairly happy with this. 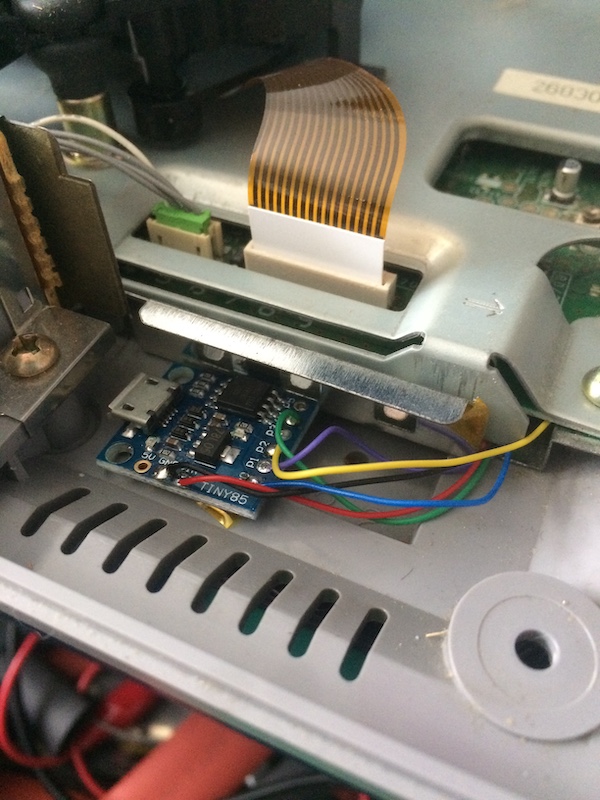 Now to test! Unfortunately, I had no luck with it. No games would load, kicking to the audio-CD player screen at best.

I ended up feeding power into the 5V pin instead of the VIN pin on the microcontroller (the PlayStation’s 3.3V main power rail obviously doesn’t give enough headroom for the Digispark’s 5V regulator2) and then restarting. Now I could play legitimate Japanese games, but not any North American games or a backup.

At this point, I did a little more research and found out that a Japanese PS1 cannot really be modified to run a North American game. Even if you bypass the copy protection/wobble data check, something in the Japanese BIOS doesn’t line up between the two versions.

At best, my new US copy of A-Train is going to get routed to a “not a good disc” error screen. This was a big downer, but luckily I am too damn stubborn and had already spent an afternoon globbing solder into this thing. I refocused my attentions on getting Japanese backups to work.

After a few hours of tearing my hair out and rechecking all of my work, I decided to get rid of the Digispark clone (I’d had lots of problems with them before) and put in an Arduino Pro Mini clone instead. Hey, a legitimate Arduino part is too expensive to leave for all eternity inside a PlayStation!

With the Pro Mini, I would now get this error on burned discs: 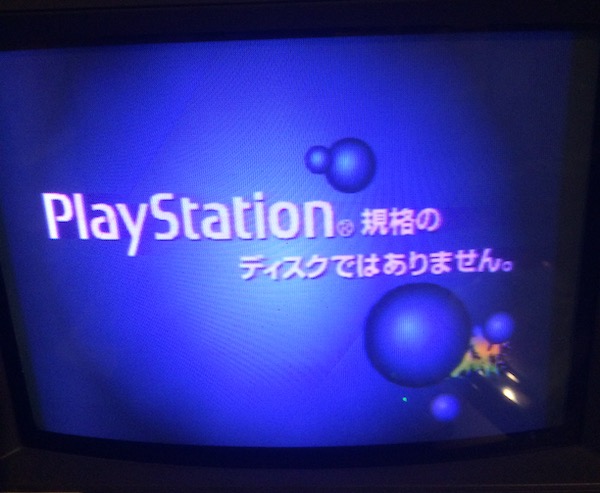 That was the only difference. Once I enabled logging and reflashed the board (a treacherous operation involving friction-fit pins and me jiggling a laptop on my knee), I was able to get some more log messages about what was going on. The chip was definitely working, but it seemed like the PlayStation just didn’t care to listen. I was out of ideas.

When in doubt, spend money

The other popular modchip for the PS1 is the MM3 (“Multi Mode 3”), which I was able to grab off eBay for ten dollars shipped from France. It came with a reel of (all the same colour) wiring and even a cute little amount of solder.

I don’t think the PsNee modchip software is necessarily wrong, so much as I was having no luck fiddling with the various parameters. It seemed like it might be a better use of my time to spend ten bucks and try something different.

At first, the seller sent me an NTSC/U MM3. Makes sense: I live in North America, why would I want a Japanese modchip? After explaining the situation to them, they sent me an NTSC/J one instead, free of charge. Awesome!

I installed this new one in the messiest way possible, by bending the legs of the chip and globbing solder to fly wires everywhere. At this point, I was pretty much done with the project; a really far cry from the original Digispark clone implementation with nice tight wires.

Naturally, it also didn’t work, with identical mis-behaviour, which made me put this whole project on the shelves for months in frustration.

More than a year later, I decided I would just grab a cheap US PS1, since I was cleaning up and found the spare US MM3 modchip lying around. For ten dollars plus shipping, this grey parallel-port-less SCPH-9001 PS1 was on its way to me from eBay. It was built in June 1999, which makes it one of the newest things I’ve shown on this weblog.

The SCPH-9001 is not well supported by the “current” world of drive emulators like the XStation and PSIO, so the value appears to have held fairly low in what must be the only “deal” that still existed on old consoles during the pandemic. Either that, or everyone else was sketched out by the seller’s low rating and sparsely-worded ad.

Even if modding it didn’t work out, I could at least finally play my copy of A-Train.

It arrived super quickly, and just as I expected, it didn’t work. When turned on, all it would do is make horrible noises from the disc drive and not load a disc. Clearly, the seller knew this, because it was sold as “untested” by someone who had a whole pile of videogame stuff for sale, including the exact cables you would need to “test” this PS1.

That’s okay, I can assuage my damaged ego by modding this and finally getting my redemption. Maybe throw in one of the good disc drives from the other PS1s, right? 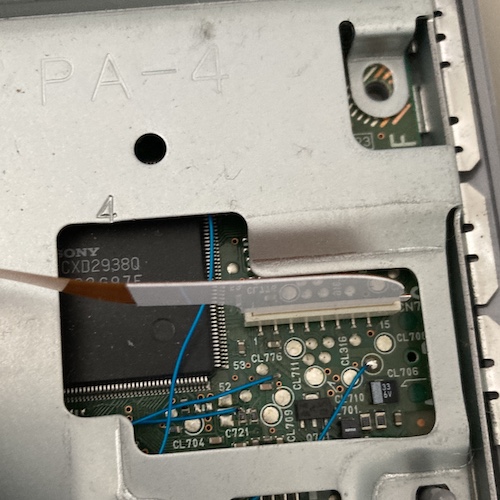 Uhh, it appears that someone else has already modded this PU-23 motherboard. I guess it’s not a surprise that a used PlayStation might come with a modchip. Let’s take a closer look, and see if it’s an MM3 or something.

No idea what this is, but it’s an 8-pin “wide” DIP, most likely a PIC of some sort. Since this modchip was, by dint of being stuck in a 1999 PlayStation, most likely installed after 1999, it is ideally a “stealth” modchip and not one of the ancient PICs that someone pulled out of a toolbox and slapped into it. The soldering job on pin 8 is not fantastic, but it seemed to have continuity when I tested it.

Even so, this is probably an older modchip whose compatibility would not be as thorough as the PsNee or MM3, but I was feeling lazy, so I decided to keep it in there at least until I figured out how to fix the disc drive. At first, I thought maybe the seller had failed at installing a modchip, but the number of dust bunnies inside told me that it’d been awhile since it was last opened.

As an aside, when I opened up the PS1, I noticed that there was what appeared to be a snipped-off through-hole solder joint bouncing around inside the case. That’s weird, and I never figured out what it came off of.

…then fix it, too 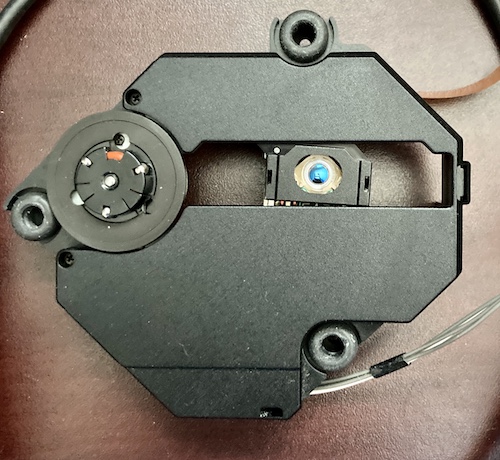 Something mechanical is wrong with this thing!

At this point, I stopped to tear open one of the Japanese PS1s, thinking I would just swap the drive assembly over and be done, but the cable lengths were different between the two units3. This made sense; according to the sticker on the bottom, this SCPH-9001 was made in June 1999 and the Japanese PS1s were all way, way older than that. I’d have to actually fix something, instead of just do high-speed parts swapping. 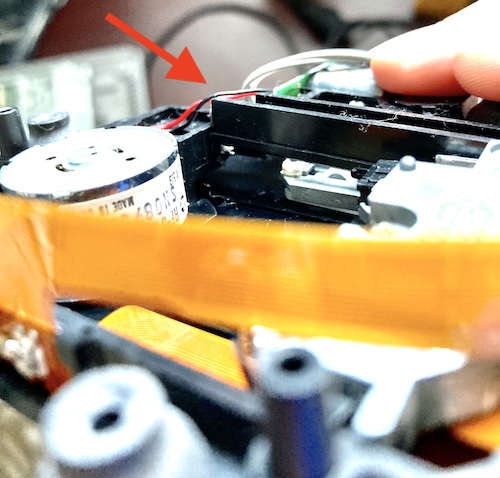 After looking closely at the drive assembly, I realized that the plastic rail everything travels in had popped out of the front. Probably, someone had dropped something heavy on this PS1 in the past, and the laser carriage could no longer move.

Using my best mechanical sympathy and repair-jerk’s intuition, I forced the plastic bit that was sticking up back down with my thumbs until it snapped back into place. All better!

I tried out the games that hadn’t worked with the Japanese PS1s. As expected, both of my burned games (Harmful Park and Umihara Kawase Shun) did not load on this PS1 either, which fed my suspicion that I had just burned them wrong. My “Import Player Lite” CD-R, however, did load up just fine, confirming that the modchip appeared to be working. 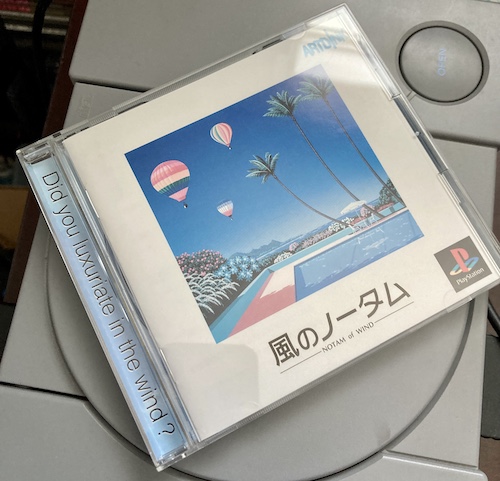 I then confirmed using A-Train (US) and Notam no Wind (JP) to make sure the region lock wasn’t present. Again, the modchip – whatever it is – lived up to its job, and loaded both the Western and Japanese retail games on my US PS1, which is more than the MM3 and PsNee had managed on the Japanese units.

I did eventually get the CD-R of Harmful Park and a freshly-burned copy of Zoop4 to boot without using the Import Player (which actually didn’t seem to work to boot those CD-Rs, either.) 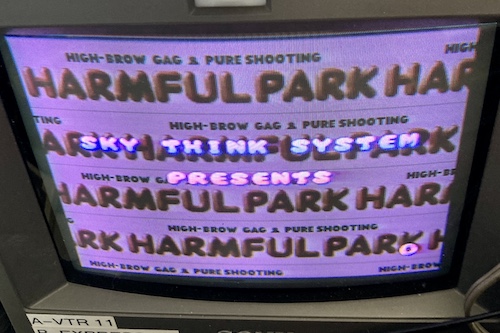 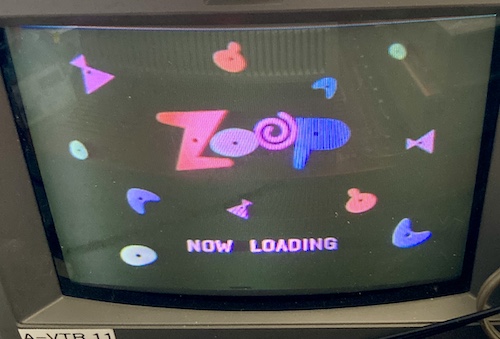 I’m not entirely sure what I did to make this work, or if it will stop working again in the future, but it’s possible there is some deeper fault in the machine, or I just don’t know some subtlety about how to use this particular modchip.

In order to verify if the mystery chip really is a “stealth” modchip, I’ll have to try with some of the games (like Spyro) that are notorious for getting cranky when run from a burned copy. I may very well end up tearing it out and wiring in an MM3 after all.

This, of course, means that I will have to make the ultimate sacrifice of burning a lot of CD-Rs. In the course of writing this entry, I went to the store and picked some up – somehow I’d run out! – and found out that, thanks to the Canadian copyright levy, blank CD-Rs are still ridiculously expensive.

I’m not even using them to pirate music!