You wouldn’t think it’s hard or expensive to find a Model 2 Genesis, but apparently in Japan it is both. I’d been looking for one of these for a while, and finally got just the right (cheap) console. Let’s explore some Japanese Mega Drive games with it. 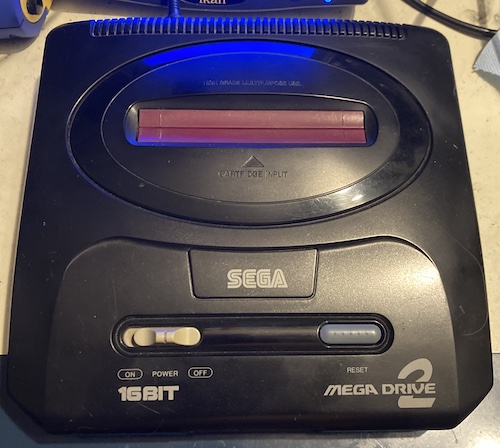 Although the cartridge slot surround says “high-grade multipurpose use,” it is not clear to me what other purpose a Mega Drive II would have, other than playing games. The Japanese Model 1 goes all-in for the adjectives, claiming that version is an “AV Intelligent Terminal High-Grade Multipurpose Use.” You might think this is a lot of words to put onto a console, but it’s actually fairly reserved compared to the Mark III’s twenty-word label.

During both my prior visits to Japan, I’d wanted to get a Japanese Mega Drive 2 as a souvenir (don’t go on vacation with me.) It looks just different enough from “our” Genesis to be eye-catchingly weird, and the Genesis 2 specifically holds a lot of nostalgia for me. However, whenever I found a Mega Drive of any description at a used-games or recycle shop, the price would be crazy high. I’m not sure if this was just that they were unpopular, I was going to the wrong stores, or that they’re being hoarded, but I returned home empty-handed each time. Perhaps I should have brought the Bad Pinny Genesis and a duffel bag full of NHL ‘94 with me to trade.

This one showed up on Yahoo! Auctions Japan, and although I paid above what I think it was “worth” at ¥2000, it was still the best deal I’d seen for awhile.

I set this up with my Genesis 2 power adapter and cables. For some reason, the mini-DIN video cable was very annoying to get into the port, but it ultimately seated well enough with a little force. It never did feel confidence-inspiring, however.

One thing that was unexpected about the Mega Drive 2 is that there’s no power LED. Even the Genesis 2 has one. Maybe they figured if the Famicom and PC Engine didn’t have a power LED and were beating them hollow in sales, they didn’t need one either.

As a bonus, I could justify the purchase of this Mega Drive by offering to investigate blog friend Nicole’s findings on the TMSS system. She had a theory that Phantasy Star II would not run on a TMSS-enabled Japanese Mega Drive, but it ran fine on her own Japanese Mega Drive 2 in practice.

Let’s take a look at that first, with a quick trip to the boxed copy of Phantasy Star II I definitely didn’t buy just for this purpose. 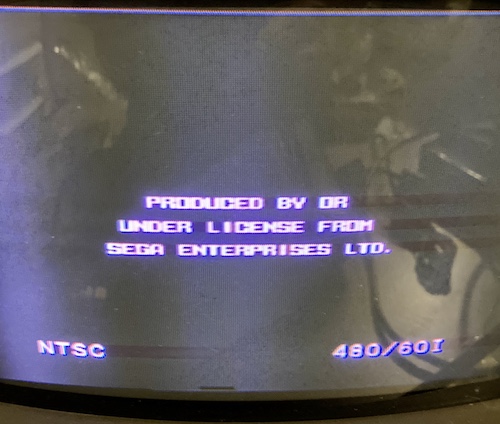 It works! And the saves are even still good; high-level characters near the game’s end.

You can see from the smearing horizontal stripes that my long-suffering PVM9L2 is suffering even more these days. The “purpley colour” phenomenon lasts longer after startup than it used to, and the jailbars are getting thicker. 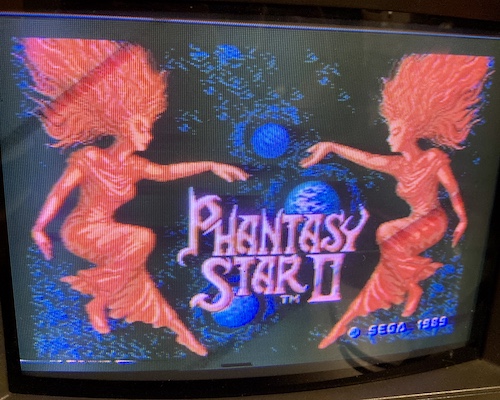 These horizontal luminance(?) smears are a new artifact as well, and show up on every console I plug into it. It’s probably well past time that I take this poor monitor apart and start replacing components, but it can play a few more videogames before I dedicate the bench room to do open-heart surgery.

I’m not planning on going through every Japanese Mega Drive game in my pile (it turns out there are a lot more than I first assumed) but there was another within easy reach. That game is A-Train MD. 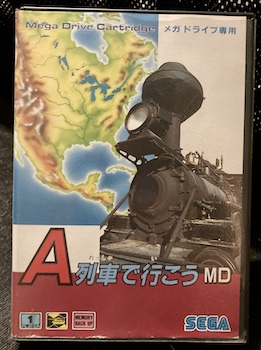 I bought a boxed copy of A-Train MD for some reason, mostly out of misguided brand loyalty to Artdink. According to the manual, Sega themselves ported this game, so Artdink probably had nothing to do with it. Oh well. 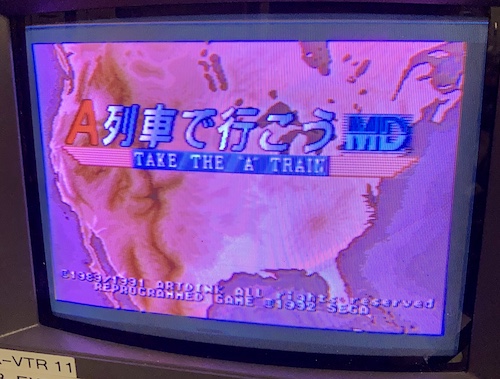 This is basically the same as the Famicom game, except with slightly better graphics and music. I might do a future comparison series about A-Train when I figure out how to actually win at them. 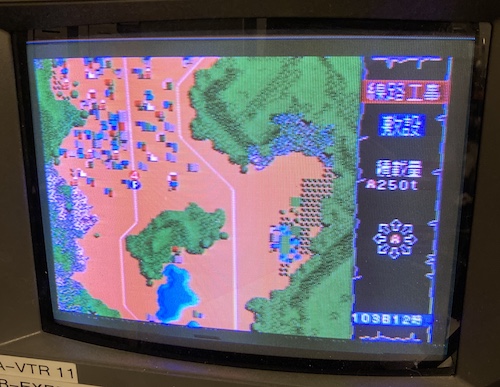 I also wanted to test a friend’s new Genesis homebrew game, Solitaire in Space. This would be the first time this game has run on actual hardware, in case you wanted even more nerve-wracking excitement. The game answers a complex question: what if we played solitaire… in space?

I put the game ROM onto my trusty Mega Everdrive X3, and away we went. 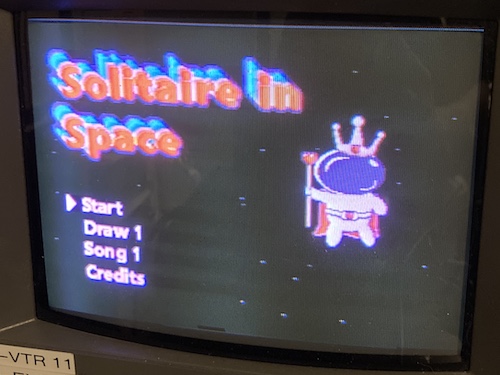 I actually played this for a good long while. It’s solitaire, after all, and the minimalist beep-boop music put me in a nice trancey state of relaxation. 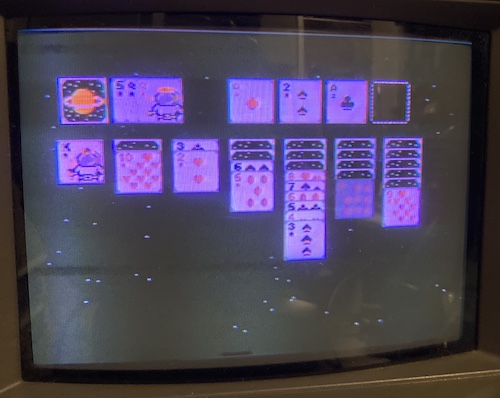 Hey! A Repair Occurred After All

When I went to test a US copy of Bonanza Bros in the system, I couldn’t get it to start unless I was wiggling the power connector. I immediately tore down the machine and found this very cracked series of solder joints around the jack: 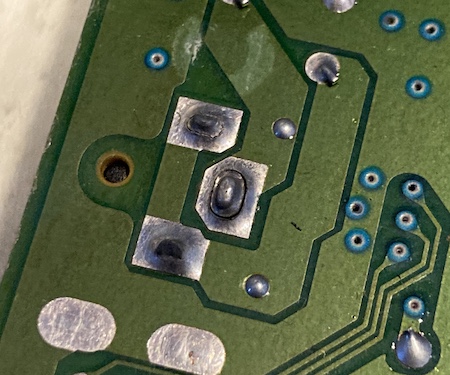 I quickly got rid of the old solder with a solder sucker, applied good new stuff, and got back to playing. A very quick, unambiguous, and satisfying fix.

Now, the Mega Drive would reliably turn on, although wiggling the power connector while it was working would sometimes cause a tiny interruption or glitch. I’m guessing the connector is a bit rusty inside, which is okay because I have plenty of spares from the other Genesises I’ve fixed. If it gets worse in the future, I know exactly where to go.

It was very nice to get such an oddball console into my collection, finally. Although this was somewhat of a light entry, it’s good to just sit down and play a console once in awhile without having to fix it first.

…Even though I did still have to fix it.

« Modding a PlayStation (Eventually) That name again is Mr.PC »