Back when I did the recap, power supply recap, and trace repairs on the Bad ADB Mac LC, there was something missing. Even after all that work, I was only left with a measly 16 colours at 640x480 resolution. That’s not enough colours at all, but luckily it’s pretty easy to fix.

As you might have figured out if you’ve read the previous articles in the series, I had a Macintosh LC growing up. Since the original 12” monitor was only single-sync, it could only do an oddball resolution of 512x384, while lots of games and even productivity software were expecting at least 640x4801. So the 12” got put in a box, and a new Apple Colour Plus 14” display was purchased from the store. At which point we realized the computer only supported 16 colours with such a huge amount of screen real estate. Sounds familiar?

The fix, of course, was to swap out the video-RAM SIMM on the motherboard. Apple made this replaceable, and so it was an easy job to purchase a 512k VRAM SIMM from the local Apple Authorized dealer and put it in. I seem to recall the dealer actually did the swap, and I looked around for more games to buy while we were there.

This all makes sense, of course: with the original 256k VRAM SIMM, storing the framebuffer is a tight fit. 256 unique colours mean that each pixel has to take up one byte (28 = 256):

So you end up having to use 16 colours, or 4-bit, so you can pack two pixels into one byte:

There are of course other ways of encoding colour information that would have been more space-efficient, but this is what Apple picked. Obviously, it was good enough for the Bad ADB Mac LC throughout its entire life being used in an Ontario public school.

In times long past, you would just go on a memory supplier’s website and order a 512k VRAM SIMM. Despite your initial instinct that they are likely Apple-proprietary, they are basically just very low-capacity 68-pin SIMMs.

Unfortunately, when I went to go look, it was hard to find any of the old vendors still around. So, I did the next best thing, and went on eBay, where of course I was met with ridiculous scalper prices – upwards of $60 for a 512k VRAM SIMM that wasn’t even tested!

I figured there had to be a better option, and shelved this upgrade for a little while, until I saw SiliconInsider’s Twitter post about making 512k LC VRAM SIMMs.

At the time, he had made a small batch, but was waiting on parts to make more, so I waited. And honestly, I kind of forgot about the whole thing until recently, when I had to move the Bad ADB Mac LC.

I searched again, and found that SiliconInsider was selling some new 512k VRAM SIMMs on his Tindie store. The RAM arrived quickly after making the order, and came in this keen little heat-shrunk anti-static bag.

The backside is a particular delight, with a cool silkscreen illustration of the LC logic board.

The old VRAM is pretty easy to remove: it’s just mounted on some cheap tin spring-clips. Once you’ve freed it, it practically pops out. Here are the old and new VRAMs together:

I noticed that the old socket was very dirty, and even had some dull-looking pins. I quickly blew it out with compressed air and moved on.

Unfortunately, my cleaning method didn’t exactly work. I got a bunch of chaotic garbage on the screen during my first boot attempt. 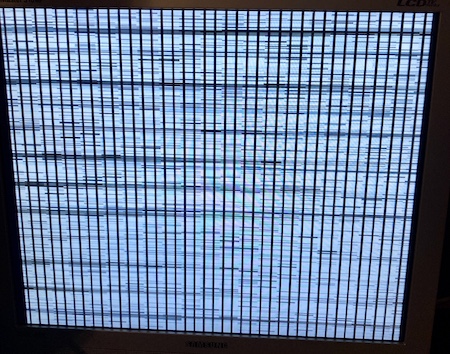 You see this phenomenon a lot with the Mac Pluses, too. This is because their 30-pin RAM, like the original Apple VRAM I just pulled out of this computer, have cheap tin fingers that like to oxidize. They’re also not terribly well-leveled, and sometimes you end up with a pin or two in the socket that is just a little bit slack.

In order to clean it a little better, I powered the machine off, removed the new VRAM SIMM, and flushed the socket out with isopropyl alcohol. I dabbed the edge of some fresh printer paper in there to absorb any gunk lying around, and eventually it came back clean. To finish up, I shook out the socket, reinserted the VRAM, and started the LC again. 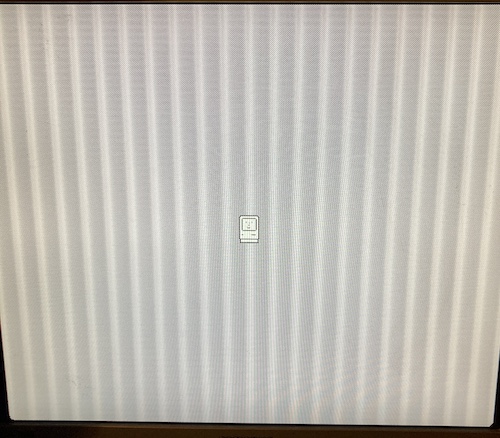 Success! Although I wasn’t particularly enthralled with the crappy upscaler in the Samsung 910MP I was testing it on, I did get a happy Mac and a successful boot in monochrome mode2. Maybe I should have used the GBS-C to upscale this better.

And indeed, there is now a 256-colour option in the Monitors control panel: 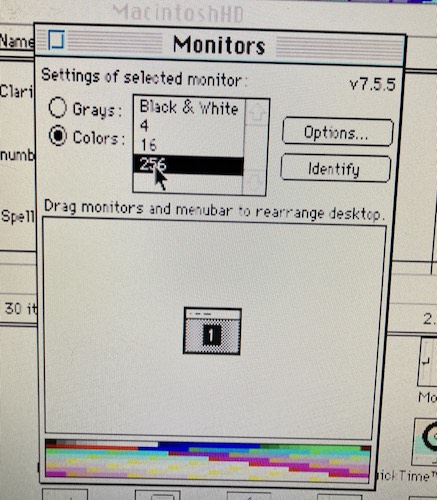 Now that I had 256-colour mode, the only thing left to do was to find a game that required 256 colours. At first, I wanted to get a copy of Tetris Max from a CD-ROM onto a floppy disk using another Mac. This was a struggle in and of itself, and I obviously have some repair work on the other Mac to do… but I did eventually copy it to the LC.

Unfortunately, that version of Tetris Max immediately bombed out on an Error Type 10 (trap error.) I’m not sure what extension or patch the game was expecting to be there, but I didn’t have it. Not wanting to go through the whole ordeal of copying another game onto the floppy again, I looked over the hard drive for a different game. 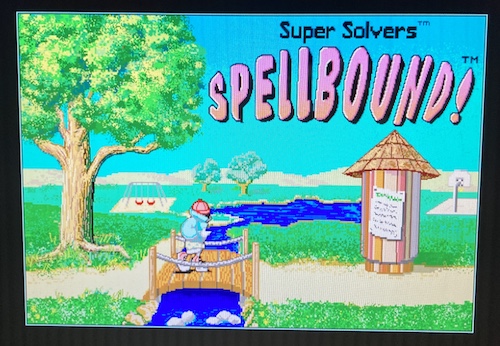 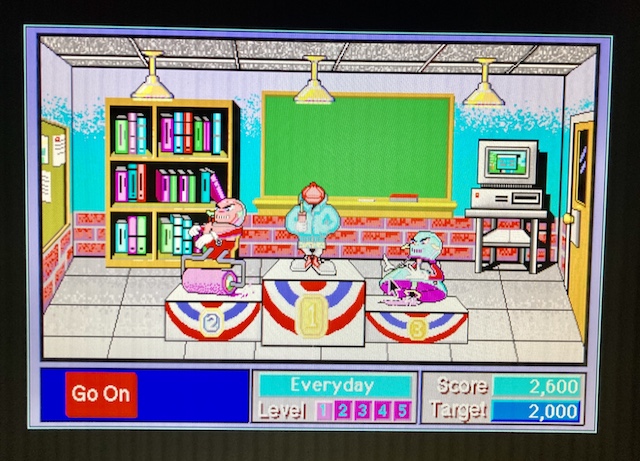 I don’t like to brag, but I pushed these robots’ shit in. Learn to spell “table,” robots.

You’ll notice the black frame around the image – this game actually runs in what appears to be a 512x384 “window” in the middle of a black screen. The developers definitely knew this would be running on a 12” LC monitor at a school, which is why they could require 256 colours… which brings this whole ordeal to a sort of perfect circle.