While a ColecoVision is sometimes pricey and hard to find in my area, the much more rare Coleco Gemini fell into my lap while looking through my favourite flea-market junk bin. Because the machine came without cables, a power adapter, or joysticks, it had been relegated to the sad little corner where unloved consoles go, right next to a stripped-for-parts Intellivision II and a battered-looking 2600 Jr. Let’s see if it can be coerced to once again play Combat.

Obviously, this is a Canadian model, because all the labels on top are bilingual. I haven’t seen any pictures of other Geminis with this French-Canadian sticker set, which is a cool thing to see. Not a lot of other manufacturers did this, which only strikes me now as being weird. Perhaps this was only for releases in Quebec and this little Gemini has found its way west since then.

In the likely event that you’ve never heard of one of these, the Gemini is an Atari 2600 clone (Get it? Gemini? Twins?) It’s based on the ColecoVision “Expansion Module 1,” which plugged into your CV and enabled it to play Atari 2600 games. It did so by containing effectively an entire reverse-engineered Atari 2600, 6502 and all. Atari sued, of course, but after they settled out of court, Coleco ended up having licensed a bunch of Atari patents, which freed our Cabbage Patch Kidding friends up to make a standalone clone. It’s much, much smaller than the regular 2600, and about the same size as a 2600 Jr. 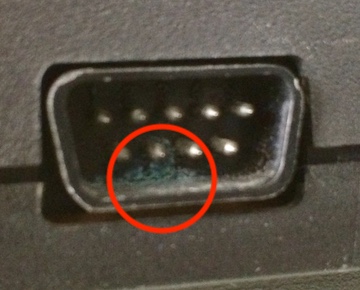 This particular model caught my eye as a potential repair candidate because of this weird green goo in the left controller port. Corrosion, I thought. Gonna have lots of traces to repair on this one!

Without opening up the machine, I first put a little bit of vinegar into the port to see if this green gunk would clean up, and then chased it with some isopropyl alcohol and propped it up to drain out. A thimble-full of filthy black liquid poured out and permanently stained my ESD mat, but there was no longer any trace of the green gunk on the plastic, whatever it was. Maybe I should start wearing a mask when I clean these things.

Looking Over The Board

Before firing it up, I wanted to take a look at the board to make sure everything’s alright. Solder joints are pretty commonly broken on old machines, there’s the port corrosion, and also I’d like to get some cool pictures of the pretty tan-coloured single-layer board inside the machine. 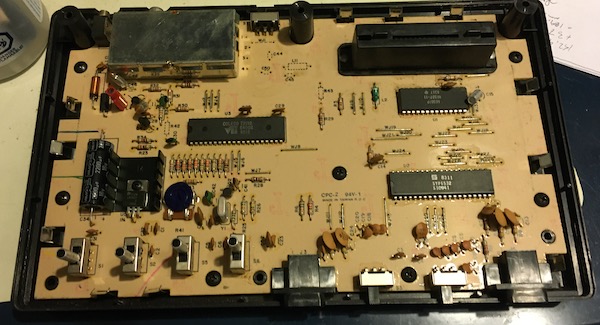 This thing smells exactly the same as the SC-3000 inside. It’s freaky. I have no idea why that is. No other computers in my collection have this particular odour, even other Sega and Coleco parts. It’s not unpleasant, but it’s very distinctive. Perhaps the boards were made in the same factory using a similar process - they’re about the same age and are both single-sided, although the Sega PCB is definitely more orangey-brown. 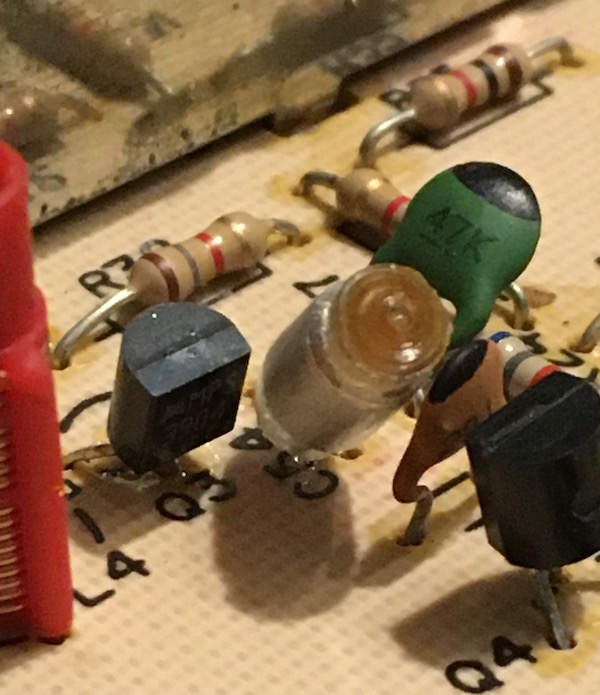 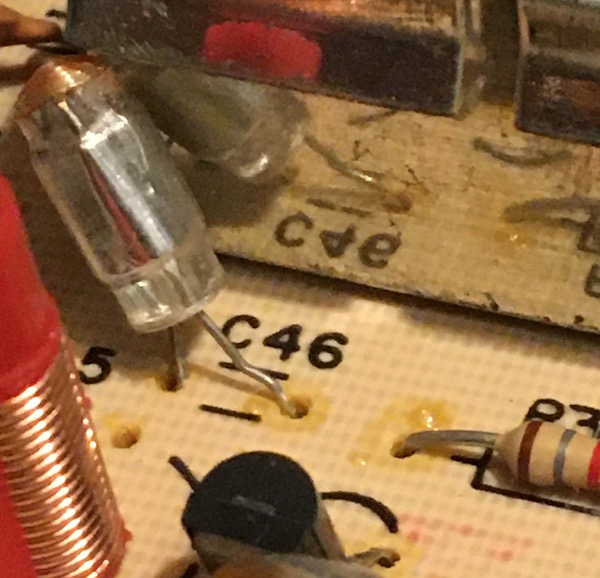 There’s some weird capacitors on the board. I’ve never seen one of these before, let alone two. Apparently these are polystyrene capacitors, which I’d never heard of before.

Looks like the Gemini was toeing the line of political caution here. The sticker on the outside of the case just says “Taiwan.”

There are only three chips on this board, unless you count the NatSemi 7805 regulator as a chip. Here they are: 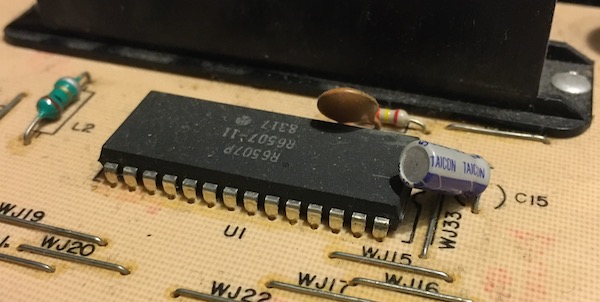 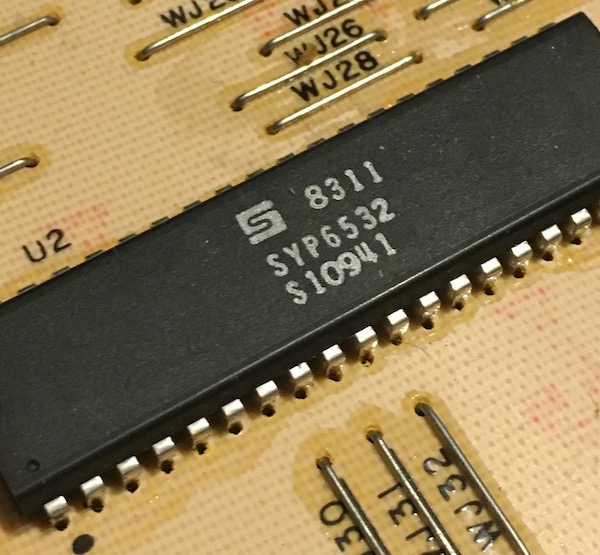 And last but certainly not least, the VTI Atari 2600 clone chip. This chip duplicates the functionality of the 2600’s TIA (“Television Interface Adapter”) proprietary Atari chip, and doesn’t appear to have been made in a legally clean way. I’m sure VTI (also known as VLSI Technology Inc.) got in a lot of trouble for it, but apparently not so much that they couldn’t show up later and make the Light Blue and Big Blue chips that I later blew (ha!) out of my Tandy 1000SX.

Here it is, the heart of the machine: 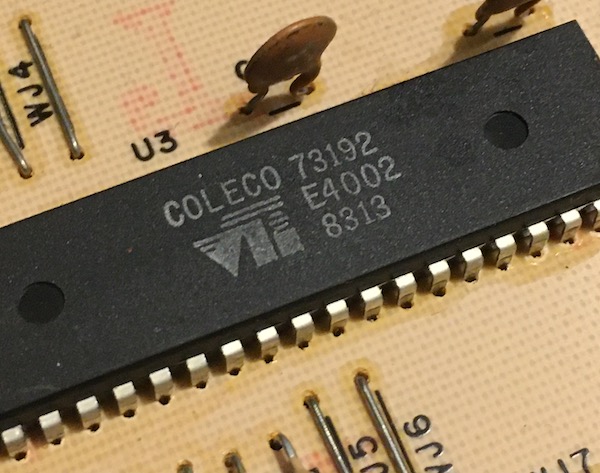 That’s a really simple board! No wonder they were able to shrink it down so much compared to the 2600, which itself has an extremely simple board… just with less well-placed dead space.

A common complaint with these machines is that the controller port just stops working. That’s usually caused by cold solder joints in my experience, and based on how wiggly my Controller 1 port is, I must have them in spades. 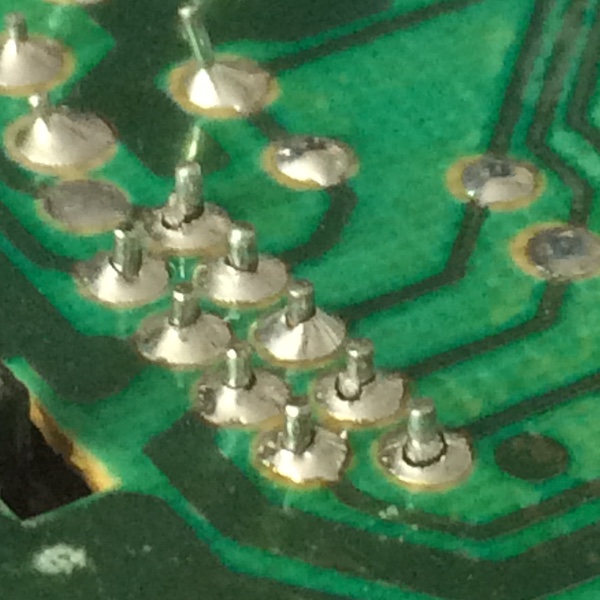 When I flipped the board over, I saw the most cracked solder joints I’ve ever seen. Somebody must have really been reefing on this for awhile to get it to work.

I soaked the area in flux and reflowed each pin with fresh solder, making sure that the connection was good with a magnifying visor.

The Controller 2 port was also bad on some pins, but hadn’t completely broken through yet. This is probably why this machine ended up on the scrap pile in the first place.

There was also an underfilled factory joint on the TIA clone chip, and a cracked solder joint on the DC jack, as well. This Gemini has lived a tough life from the start.

I considered securing these with hot glue, but I could not find my hot glue gun and wasn’t convinced it would stick to the smooth board surface anyway. We’ll just have to be very careful to take care of this machine… or I’ll add some two-part epoxy in when I come back to add some ESD protection diodes to the joystick port.

Something about the old solder and new flux combined produced one of the most horrific smells I’ve ever had on my bench. It was like someone set fire to an old armchair and put it out with a bouquet of mouldy flowers.

Obviously, I need a game, some controllers and cables to test this thing with. As you’d expect, I had a handful of Atari-compatible joysticks lying around, including the joystick that came with my Atari 800XL when I bought it a decade ago at the very same flea market. However, the power and video were two big question marks.

The Gemini is supposed to come with a funky controller that has both the Atari 2600 joystick and paddles built in, but those are obviously long gone, likely way in the back of someone’s attic. Judging from the build quality on the ColecoVision controllers, that might be a blessing.

The power adapter’s part number is a Coleco 91617; it is a 9VDC centre-positive power brick with a headphone-style connector, exactly identical to the Atari 2600. If it’s not broke… I ordered a modern cheapo one from eBay.

As for the video output from the Gemini, it has an RF-modulator on the top left of the motherboard. Good thing I already went through all this RF foofaraw with the CoCo1; the Samsung 910MP test TV I have is ready to inaccurately reproduce the colour of the Gemini’s games.

After another eBay shopping spree, I ended up with a copy of Venture (by Coleco!) and a copy of Combat.

Venture wouldn’t initially play unless I held the cartridge a certain way. I was dreading going back in for more solder joint repair, but then I slathered the cartridge’s edge connector in alcohol and just popped it in and out a few times. Worked like magic. 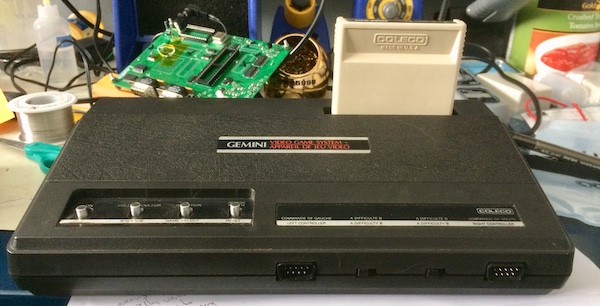 It’s super weird that you have to put the cartridge in backwards for it to fit. I don’t know of any other machines that do this. Sure hope they saved a bunch of money on the board this way.

I have a joystick for my Atari 800XL, but I first tested my repair with a crappy aftermarket Genesis pad I had lying around the TV, from a previous Genesis repair. I was heartened to find out that it worked, but it was constantly pushing Up, a phenomenon that I didn’t think could be caused by the cold solder joint repair. I went and got the Atari joystick anyway… and that worked great. 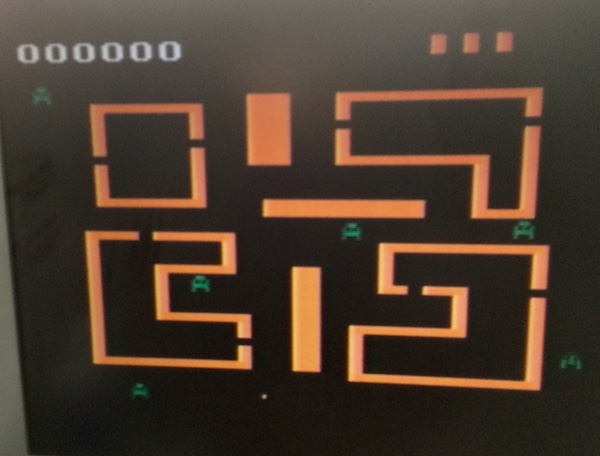 Holy cow is this machine ever loud. I don’t remember Atari 2600s having sound quite like this before, but when you shoot an arrow you can feel it in your chest. It could just be the TV, but I don’t remember this one being particularly good at rendering Sega audio. Perhaps the Gemini is the audiophile’s choice for buzzy monaural Atari 2600 sound?

I grew up playing Venture on the ColecoVision, and I can tell you right off the bat that Coleco was phoning this one in (some accuse Coleco of having deliberately sabotaged their 2600 ports.) It’s just not a good version of the game, unless you had never played the original. Then again, I’ve never programmed for the 2600 (yet!) so maybe I just don’t get how hard it really was.

I still had some fun playing it, and more importantly, now I know that the Gemini is working properly.

The Future of Warfare

For some reason, the copy of Combat wouldn’t click into the cartridge slot. When I pushed on the cartridge’s little prongs, the dust cover over the edge connector wouldn’t slide back. I wasn’t sure how to fix this permanently, so I stabbed a small flathead screwdriver into the hole where the console’s pegs are supposed to go, then pushed the dust cover back with my thumb, exposing the edge connector. 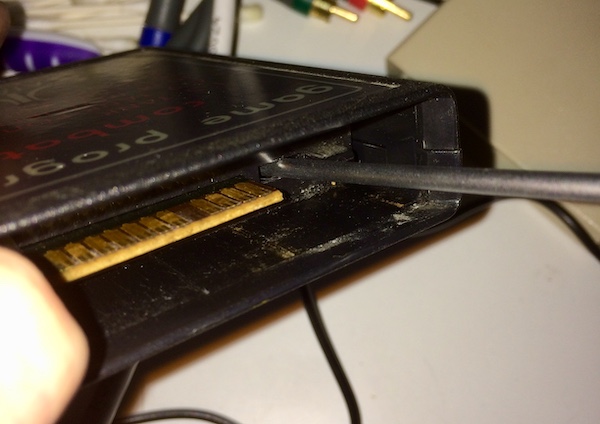 Then I slipped the cart into the slot quickly so that the dust cover wouldn’t have a chance to extend agains.

It started the game just fine, and I was immediately hit with a wave of nostalgia. A friend of mine and I used to spend a lot of childhood summers trying to beat each other at Fighters vs. Bomber, one of the sub-games of Combat. It’s not quite as fun single-player. I’ll have to get another stick.

Once I figure out how to do a more permanent repair on this cartridge, it will probably end up as part of a mini-update. It seems like the cartridges are fairly overbuilt inside, so maybe it just needs some lubrication or plastic flashing removed.

Despite the relative rarity of the Gemini, it trades hands for even less money than your average woody Atari 2600. This makes the machine both obscure and cheap, which puts it solidly in the wheelhouse of this blog: 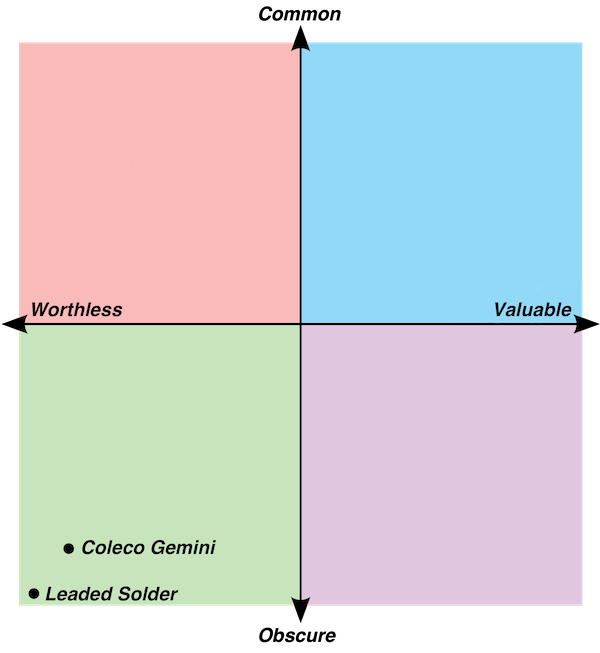