As we’ve covered before during the clone saga, the Sega SG-1000 was an unfortunate casualty of the Nintendo juggernaut. But surely the redesigned SG-1000 II would do better, right? No.

I bought this SG-1000 II as part of a combo package on Yahoo! Auctions. It came with an SK-1100 keyboard, which is what I was looking to purchase in the first place. Both units were boxed, but the SG-1000 II was sold as broken. That little detail is probably why I was able to get the two of them together for just ¥12700, when usually the keyboard goes for that much on its own.

And, I don’t think I have to remind you, a broken console is not at all a deterrent for Yours Truly.

The ad was pretty clear about what the seller thought the problem was:

Checked the operation. The main unit software cannot be read. When you turn on the power, the screen responds, so there is probably a problem with the terminal side. Please use it as a junk item for the above reasons.

I suspected this was an easy fix. I had some theories about what was going on here:

I had another SG-1000 specific theory, too: the seller just didn’t wait long enough for the game to start. When you turn on an SG-1000 game, the screen is black for several seconds after sync is established. During that time, games are forced to wait in a loop for the TMS9918 VDP to become available. Having a black screen on startup for that long is unusual for game consoles, even Sega ones, so I can see how it would scare people into thinking the machine is not properly reading the cartridge. After all, it did that to me. 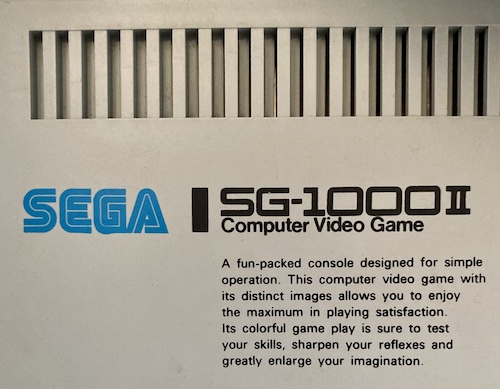 Like the Mark III, the SG-1000 II has a silkscreened English label on the top explaining how much fun you’re about to have with it. I miss the era of Sega writing half a novel on top of game consoles.

Unfortunately, this SG-1000 II only has RF-out, like its predecessor but unlike the SC-3000. I dug around in my scrap pile for awhile in order to find the RF-to-AV demodulator.

The Soggy-1000 clone of the SG-1000 is the biggest board I’ve ever made, and I was feeling bad about how wasteful it is. Holding it up to the real thing, though, made me feel a little better. It’s just barely over half the size of Sega’s baleen whale of a console. No wonder I had to run so many vias.

The first step I always take when undergoing a repair is to take a good, hard look at the machine. If it’s dead, then it’s not likely to get much more dead by spending a half hour staring at it. But it can get more dead by applying power if there’s a short, or other spectacular electronic failure.

Before anything else, I checked the cartridge slot. All the fingers looked clean of corrosion. Even the plating was in very good condition, without the wear that happens over repeated cartridge insert/remove cycles. Paired with how nice the case appeared to be, I wondered if this machine was used all that often.

Nothing was bridging on the expansion slot, and I couldn’t wiggle the cartridge slot with my fingers when reaching in through the door. No pins were bent in the controller ports at the rear, and there didn’t appear to be any damage when peering at the solder-side of the board. All of the connectors were rigid and didn’t feel like they had bad solder joints. As well, the machine felt crisp and new – even the controller plugs went into the ports tightly, reinforcing my suspicion that this console was barely used.

It took me longer to find my RF-to-AV converter box than it did to wire up and test the system. As you can see, it worked fine – there’s even music and sound. I configured the RF-to-AV box to use “System M” and then pushed the Search button on the remote – it found a number of channels, but the first one it landed on was the SG-1000 playing Home Mahjong.

It doesn’t look great, but this RF-to-AV box is not really very good, either. Even displaying its OSD and nothing else, the picture is flickery and has lots of ringing. It’s virtually unreadable, and not just because of the all-Chinese configuration OSD. I bet it would be fun to go inside here and reverse-engineer their filtering circuit, as I seem to keep stacking up RF-only computers as of late.

I ended up switching the Samsung 910MP to “Japanese” mode, and then using the RF jack on that TV instead of the demodulator box. This offered slightly better quality – and much more consistent – video, but still had ringing and colour issues.

For power, I replaced the Japanese-spec SA-150 power supply (9V centre negative) with a Triad WSU090-2000-R 9V/2A centre negative switch-mode supply. A Genesis MK-1602 would have worked just as well, but I’m slowly adding Triads to my pile as it seems a lot of my systems want this particular supply configuration.

Controller one had a very stiff “down” direction, but controller two seemed to work just fine. Overall, this seemed to be a perfectly working, potentially above-average, SG-1000 II.

The pause button was just as glitchy and prone to debounce issues as my own clone, which made me feel better about the quality of my clone. I was even able to crash Girl’s Garden and force the system into a reset loop by repeatedly toggling the pause button, just like on version 1 of my clone. This is another good opportunity for me to beat Sega at their own game by spending a bit more money on chips.

All good then? Actually, I felt a little scammed. Here I was, looking forward to a repair, and yet nothing appeared to be wrong with the system. 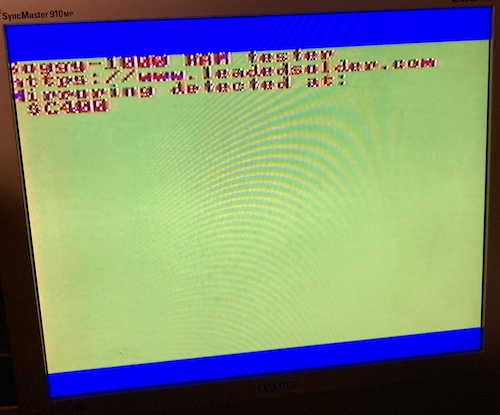 I got out the RAM tester cartridge that I had written for the Soggy-1000 clone. In case you haven’t read the latest article in that series, I boosted my clone to 2K of RAM, twice as much as the original SG-1000, because I read that the SG-1000 II (and SC-3000 home computer) had 2K of RAM.

To make sure that the 2K of RAM in my clone was working properly, I wrote this little tester program. It counts up through the computer’s RAM until it ends up in the same place twice (“mirroring,”) indicating that it has run off the end of the RAM and wrapped around. The exact electrical reasons why this happens would require a visit to the articles I wrote about my ColecoVision clone.

The important thing to take away from this is that, if the console does have 2K of RAM, it will count up to $c800 without finding any mirrors. In this case, it only got to $c400 , indicating that the SG-1000 II does only have 1K of RAM, just like its older brother.

This makes a lot of things suddenly make sense to me. It always bothered me that the SG-1000 II could have more RAM than the original model. I can’t imagine Sega telling game customers that certain games will only work on the SG-1000 II, and I also can’t imagine developers targeting that extra RAM, knowing that it doesn’t cover the entire (small) SG-1000 customer base.

Okay, let’s do some more science.

VDP, VDP, Where Are You?

As everyone knows, the SG-1000 model 1 had a Texas Instruments TMS9918 VDP. This video chip, also beloved in the ColecoVision and most (but not all) MSX1s, is a popular choice for the era. 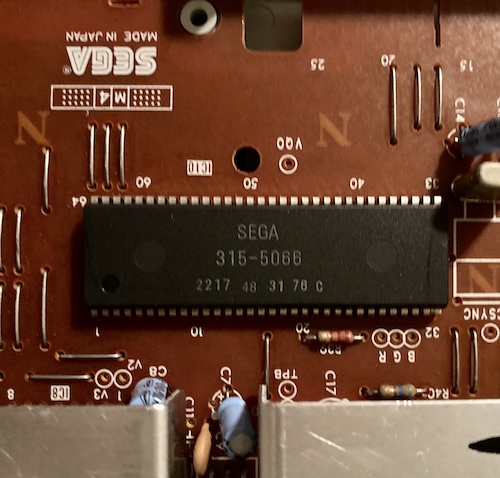 Even though the chip is custom, it still relies on two external MB81416 DRAMs for video memory. Being able to use two memory ICs instead of eight was surely a cost savings, as I suspect the later TMS9118 VDP, which works with 4-bit DRAMs, was not available quite yet.

If you have sharp eyes, you might notice those mysterious “B G R” and “CSYNC” markings near the VDP. Yep, unlike an original SG-1000’s composite output, this thing is set up for RGB! Thanks, Sega.

The motherboard is really barren without all the decode logic around, but it still is tastefully laid out. The giant heatsink is sort of silly, though. For some reason, the two 74LS257 buffers used for the controller logic have been split up and distributed far away from each other.

Having this open helped me figure out that it was indeed pin 3 on the keyboard connector that drives JOY_SEL, so at least this was a worthwhile endeavour and helped the Soggy-1000.

I also noticed that the pause button plunger was shallower than the one on the Mark III. This is probably because the Mark III’s pause button shaft needs to be longer, in order to clear the additional height of the Sega My Card slot.

The “broken” SG-1000 II didn’t need any repairs after all, but looking at it taught me a lot about how Sega made a legitimate SG-1000. It’s a little horrifying to find out that I’m equally competent to 1980s Sega with respect to debouncing a pause button, but I had to catch up eventually.

It also is reassuring that a real piece of hardware runs my clone cartridges, and I’m happy to have a known-good machine to test if I run into any unexpected clone weirdness in the future.